Chabad was there for him as a child, now he’s single-handedly erecting their menorahs.

When Rabbis Aryeh Sufrin and Moshe Muller of Chabad of North East London and Essex first started erecting a giant electric menorah on the Gants Hill Roundabout in Ilford thirty-five years ago, it required weeks of preparation, hours to erect, an expensive crane, numerous volunteers and a street closure. But it was important to them that passersby see the menorah, are reminded of the holiday and connect with their Jewish identity.

Thanks to local resident Alan Grant, 60, the project has been tremendously simplified and expanded. Grant himself built and takes responsibility for putting up the menorah come Chanukah. All free of charge. He does it, he says, because Chabad helped his family in his childhood.

He got started around eight years ago after Muller put out a call for volunteers to help with the project, as he did every year. But this time, Grant, a full-time metalworker whose work is used in Buckingham Palace among other notable locations, got the notice and volunteered to help out.

Grant assisted the rabbis and assorted non-professional volunteers try to assemble the menorah with all the labor involved. “It was a disaster,” he recalls. “I thought, there has got to be a better way to do this.”

So he went home and designed a beautiful, modern metal menorah, simplifying the electrictricity and making it easy to assemble. It needed only two people and a couple of hours.

It didn’t end there. By now, he has built seven menorahs—all designed differently and built free of charge—to proudly illuminate Northeast London. Rabbi Sufrin and his wife Devorah, joined by emissaries Rabbi Odom and Hennie Brandman who help coordinate the menorahs, will be going to each location over the eight nights and organizing a Chanukah event and menorah lighting ceremony. Grant himself ensured that each one is properly set up, lightbulbs intact and will eventually dismantle them, clean each one and put them safely into storage for next year.

Each menorah was designed differently, some by Grant himself. The latest menorah is in Epping, Essex where emissaries Rabbi Yossi and Rivka Posen recently opened a Chabad branch and will be lighting it for the first time this year. Grant says the most emotional menorah for him is the one in Fullwell Cross which was designed by Rabbi Muller himself. The rabbi never got to see the finished product, tragically passing at age forty-three, in 2016. The following Chanukah, the menorah was dedicated in his memory. “I make sure his children are involved with putting it up,” says Grant.

The project is complex. “I do it in the free time I don’t have,” he says. “Out of a gratitude to Chabad.”

When Grant was a child in the sixties, living in Stamford Hill, in a non-observant home just two streets away from the Lubavitch Foundation of the United Kingdom, his father was involved in a serious car accident that left him hospitalized for months. Not wanting to be the object of pity or speculation, his mother kept the incident quiet from her neighbors and community. Life was getting difficult and with the loss of income, the family’s finances were quickly being drained.

One day, Rabbi Aryeh Sufrin’s late father, Rabbi Aron Dov Sufrin, received a call from the Lubavitcher Rebbe in faraway Brooklyn inquiring about the Grant family. “Their daughter is enrolled in your Sunday Hebrew School,” the Rebbe said. The elder Sufrin, headmaster of said school, immediately contacted Grant’s mother and was informed of the family’s precarious situation. Under the Rebbe’s instructions, Sufrin undertook to support the family and ensure they had food to eat and the basics to live until their father was back on his feet, even enrolling the children tuition-free in his day school and eventually hiring the elder Grant when he was released from the hospital. The Rebbe developed an unusually close relationship with the Grant family and today, Alan’s sister Leah Arkush is herself a Chabad emissary in Birmingham, England.

In appreciation of the Rebbe and his shluchim, the Sufrin family, Alan Grant is “honored to repay them by undertaking the menorah project.”

After the laborious process of constructing and placing the menorahs, “I feel a sense of pride and achievement seeing them shining over the city. I love watching people point to them, connecting with their identity.” 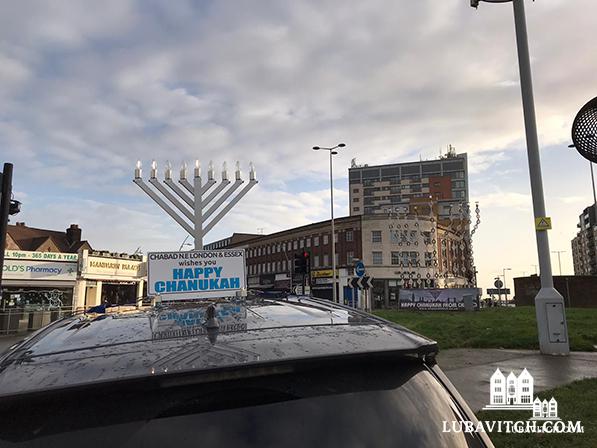 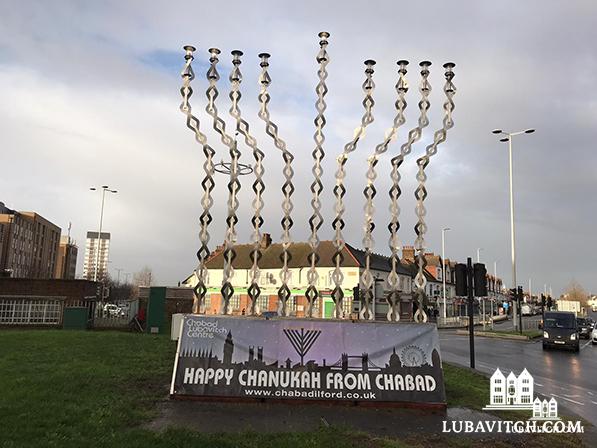