Is This Chanukah Story Too Violent For Children? 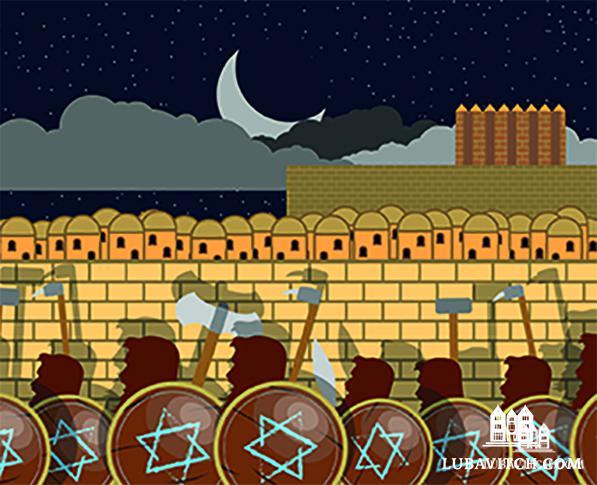 The origins of most major Jewish holidays, like Passover and Purim, are recorded in the Tanach (scriptures). And for that reason, the stories of those holidays never change, no matter who’s telling them. But the same cannot be said for Chanukah: the story isn’t recorded in the Tanach, so it varies dramatically from one telling to the next.

The major source of the story and the reason we celebrate the holiday is briefly outlined in the Talmud:

“What is Chanukah? When the Greeks entered the sanctuary, they defiled all the oil [that was in the Sanctuary]. And when the [Jewish] Hasmonean monarchy overcame the Greeks and emerged victorious over them, the Hasmoneans searched and found only one flask of oil with the [unbroken] seal of the high priest. In that flask, there was enough oil to light the menorah for only one day. But a miracle occurred, and they were able to light from it for eight days. The next year, the Sages instituted and made these days holidays with prayers of thanksgiving.” (Shabbat 21b)

From there, the story is fleshed out by a variety of other historical sources: Although many Jews lived in Israel for virtually the entire Second Temple period, they lived under foreign rule. The people were heavily taxed and, over time, the culture of the Syrian-Greeks infiltrated Israel. A great struggle began, pitting the Hellenized Jews against those who sought to remain loyal to Jewish tradition. Greek idols spread across Israel, and were even brought into the Temple, sparking the revolt of the Hasmoneans. Mattityahu and his sons (the famed Maccabees) led the revolt, and triumphed, reinstating Jewish tradition in the Temple.

Unfortunately, this spiritual victory was short-lived, and later generations of the Hasmoneans did not honor the standards inspired by their ancestors. Yet the holiday commemorates that moment in a dark and stormy time when the fire of Jewish conviction shone brightly.

When I heard the story of Chanukah as a child, the decision of the Maccabees to band together and reclaim the Temple was always preceded by the story of Chanah and her seven sons. The story has multiple versions; her name is not always given as Chanah, and some accounts of the story seem to place it during the time of the destruction of the Temple. Regardless, all tellers of the story agree on its general architecture: A cruel ruler commands a Jewish mother to lead her seven children in violation of their faith—usually by bowing to idols. If she or her children refuse, they will be put to death. The eldest son refuses, and is then brutally killed before the others. The ruler assumes that the other sons will be cowed by the horror of the first brother’s gruesome death. But the second son refuses too. One by one, each boy refuses to bow and is killed. Finally, the youngest is called forward. In some versions, he is seven years old. In other versions, he is younger. Regardless, all versions agree that he too refuses to bow. The king offers him an “easy out”—he places his ring on the ground in front of the idol and asks the boy to pick it up. If the boy complies, it will appear to the audience as if he is bowing. The young child sees through the ruse, boldly refuses, and he too is killed. The mother then leaps off a roof to her death.

The Midrash (Eichah Rabbah 1:50) describes a heavenly dialogue that takes place in response to this act of martyrdom:

Indeed, the suffering and martyrdom of the Jewish people through the ages always evokes these dual responses. On the one hand, we react with horror and revulsion and ask how G-d could allow them.

Yet, on the other hand, there is awe for the sacrifice that righteous Jews have made in order to protect, promote, and honor their heritage throughout history. We admire the sacrifice of the loving mother who raised seven children with such clarity of vision and devotion to their identity that even the youngest would not compromise those values.

Human suffering is a burning fire that both destroys and creates; it blackens and it purifies. It touches at the very mystery, the very contradiction, of human existence where meaning and meaninglessness confront one another face-to-face. Challenging our very relationship with G-d, it forces us beyond the platitudes and easy answers that suffice in less rocky times. The journey through hardship is an exceedingly treacherous one, and not everyone makes it through intact.

Which brings us back to the story of Chanukah. More so than other holidays, this story allows us a sort of “poetic license” in telling the tale: where to begin, what to omit.

When I was a child in the 60s, in a post-Holocaust world that had seen the founding of the modern state of Israel, it was popular in some circles to see Chanukah as imparting the lesson that we should never go “as sheep to the slaughter.” The emphasis thus would be on the resulting victory of the “few over the many.” Needless to say, that narrative is not as popular today as it once was.

In the 90s, I heard surlier folk argue that Chanukah should be banned by those with modern liberal sensibilities because “the wrong side won.” Why should they commemorate the victory of the religious zealots over those who were willing to assimilate into the wider culture?

Our current sensitivity to the benefits of diversity and the evils of cultural appropriation are rapidly making this form of the story passé as well. Millennials find it more comfortable to relate to the themes of tolerance and religious freedom, the flames in the darkness suggesting the ultimate triumph of good over evil. These are non-challenging ideas, easy sells, universal values that all of us should be able to agree on.

What role does the story of Chanah and her seven sons have in the Chanukah message? Can it just as easily be omitted? Is it time to retire it, given its uncomfortable discussion of martyrdom—especially of the young? Even if it has historically been associated with Chanukah, the story’s accuracy is questionable. What would we lose if we cut it out of the Chanukah narrative?

Even if adults are willing to accept the fact that our history is bloody—that even our victories have often come at a steep price—is this kind of fare appropriate for children? Won’t they find it too gory? Too frightening? Won’t it make Judaism something negative that they may then grow up to reject? Might it make them feel unsafe to see a grieving mother whose only solace in her children’s death is that they gave their life for G-d? How are they to understand her failure to protect them from harm? Might they worry that their parents might one day allow them to be sacrificed as well?

And what about Chanah herself? Had she really fulfilled her obligation as her mother? Wouldn’t she have done better to teach her children to lay low when confronted by tyrants so that they might live to see a better day? One need only check the comment section on the story of Chanah posted to Chabad.org to see evidence of the fact that large numbers of Jewish parents today feel that this story is not appropriate fare for their children.

Power to the Children

As a parent, an educator, and a developmental psychologist, the first rule I was taught was never to talk down to children. Everything could be explained to children if only one took the time to frame it in terms that they could understand. And the first and most powerful form of instruction is storytelling. Through this lens, children are capable of grappling with deep philosophical ideas—often without the obfuscating vocabulary that mars adult discourse, promoting circular conversations that say more and more about less and less.

The best children’s literature, like the best adult literature, is subversive. It lays out assumptions and asks us to question them; it tells us what to expect and then defies our expectations. No one is interested in the story of the obedient little girl who eats all her vegetables and grows up to be good and healthy. Nor are children particularly drawn to stories where kids are weak and helpless until their mommies swoop in to protect them.

What happens if we stop thinking of the story of Chanah primarily as one in which the grown-ups failed to protect the children? What if, instead, we thought of it as a story about children finding their own power? The tale of Chanah and her seven sons is one in which no one “talks down” to children. The tyrant who brutally murders the eldest son—in many acccounts by slow and gory torture—does so in order to show his courtiers his absolute power. His goal is to intimidate and break the spirit of the younger brothers. But as the second and third sons are unmoved by his threats and theatrics, the tables gradually start to turn. We discover that it is the tyrant who is weak, not the children. By the time the ruler reaches the youngest child, he is practically begging the child to play along, offering an easy out that will allow the ruler to save face.

A mighty general should surely be able to trick or cajole the child into following his bidding. But the child refuses to be reasoned with. And as in all great subversive children’s literature, we let our children know that sometimes, being stubborn and unreasonable is the most powerful thing one can do. When we tell our children the story of Chanah, we teach them that young as they are, they can speak truth to power, can right an unjust course of action, and can incite a rebellion that changes the course of history.

The hardest audience for a performing magician is young children. Adults see what they think they are supposed to see. The performer can anticipate their reaction, lead them to make unwarranted assumptions about what is happening, and thus fool them. But children ignore conventions and will react in unexpected ways. They, unlike adults, have not yet learned the “right” way of responding to a given situation. Most of the time, this lack of experience disadvantages them. But at times, it allows children to look where no adult would think to look, to see what no one else allows themselves to see.

As I tell my version of the Chanukah story to my grandchildren, I might omit the part where the Maccabees spear the elephant on which the Syrian-Greek generals rode. (Poor elephant.) I certainly won’t drum up detailed pictures of the idols that littered the Temple before they were removed. (Too risque.) But the story of Chanah and her seven sons? I trust I can tell it to them in a way that is not frightening, but inspirational.

And while some adults reading the story may be nervously hoping beyond hope that Chanah’s youngest child might find a way to slither the ring over to the despot with his toe without actually bowing—or that they can pretend the end of the story has been ripped out of the book by some older siblings—in my telling, I will lead them to gleefully expose the king’s machinations: “He can’t fool me with that silly ring trick.”

Agree? Disagree? What does your version of the Chanukah story include? Email editor@lubavitch.com or join the conversation on Facebook: @ChabadLubavitch.