When Kids Are The Lone Menorah

When they're a minority in their school, how do these kids celebrate Chanukah? 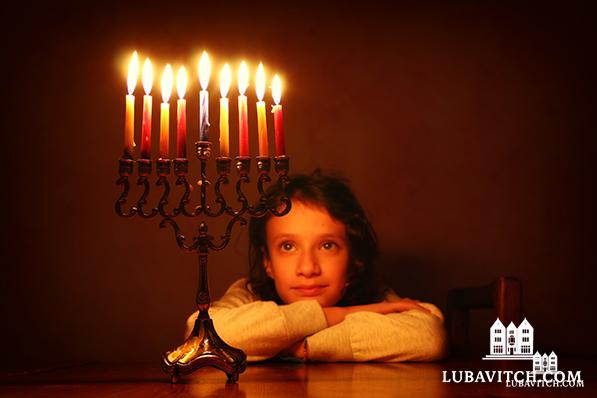 “When I grow up, I’m going to marry Matt. Then we’ll have an Xmas tree in our house,” five-year-old Emma Goodman declared, as her mother, Rebecca, picked her up from school one day in December.

Emma, now seven, and her brothers, five-year-old Isaac and two-year-old Aaron, attend a small Montessori school in West Lafayette, Indiana, where only five other Jewish kids are enrolled.

Like Jewish students at secular primary schools all over the country, these eight children represent a small minority of their student body, and therefore face daily challenges to their cultural and religious identities. These challenges become especially pronounced during the winter holidays.

“On the one hand you know you’re different, and on the other hand, all you want is to fit in with your peers,” explains Shachar Peleg, who attended public school in her elementary years in Dallas, Texas. Shachar says that she never cared to celebrate Xmas, but like Emma, she wanted the decorations.

Fellow Texan Katherine Belilty, who was one of ten Jewish kids among a total of 2,500 students at her public high school in Frisco, it wasn’t so much the decorations but the gifts. “My friends had this notion that we get eight nights of gifts, but I was just envious of the outrageous bounty they’d receive on that one day,” she says.

For both Katherine and Shachar, it was the isolation that was most difficult. In years when the holidays collided, everyone had something to celebrate, but when Chanukah came out on school days, Katherine and Shachar were celebrating alone. “At home you’re celebrating, but at school, there’s no one to acknowledge it,” says Shachar. “It doesn’t feel like much of a holiday when you’re so busy with homework,” Katherine says. Both agree that it’s difficult to value something when you feel you’re missing out on something else.

According to a 2014 AVI CHAI Foundation census of Jewish day schools in the U.S.A., only 255,000 out of the country’s 55 million school children were enrolled in Jewish schools that year. The majority of Jewish kids, like the three Kunsberg kids, Shachar, and Katherine, find themselves in the minority. How do they make it work? “What saved me was getting my friends involved,” says Katherine. In her sophomore year of high school, she invited friends over for her family’s menorah lighting. Her mother prepared latkes and doughnuts and Katherine led a game of dreidel. She even found some pamphlets she had kept from the few times she had attended the local Chabad Hebrew School. “My friends were fascinated by the fact that the game, the food, and the candles each commemorated something.”

Shachar, who now serves in the IDF, says that her Israeli-raised parents initially weren’t sure how to support their children whose childhood experience was so different from their own. They just knew they didn’t want Chanukah to be secularized. “They sat us down and told us, ‘We’re Jewish. Your friends’ holiday is great, but we do things differently,’ and then they put in extra effort to make Chanukah a very positive experience,” Shachar explains.

Sitting around the menorah with the family each night, telling stories, and enjoying the special foods and family time did the trick for Shachar. “They taught us to appreciate the beauty of the menorah without all the popular flashy decorations,” she says. “We were enthused by their positivity.”

Some parents have taken it a step further, empowering their children to share Chanukah with their peers. A few years ago, then-six-year-old Sammy Husmann adamantly refused to sing the Xmas songs at his school’s winter concert in Olympia, Washington, only brightening, and waving his arms proudly when they came to the song ‘Oh Chanukah, Oh Chanukah.’ His mother, Celia, read a Chanukah book to his class and educated his friends about the holiday. She distributed chocolate coins and a dreidel with playing instructions to each child. “In public school everything is themed around Xmas, the kids know there is another holiday called Chanukah, but they were shocked to hear that there are people who don’t celebrate Xmas,” Celia says.

And her efforts paid off. When her younger son Jacob arrived in first grade this year, he told his teacher that he doesn’t celebrate Xmas because he is Jewish. The teacher emailed Celia asking how she can help Jacob celebrate and so Celia did the same as she had done for his older brother and his classmates. “The teacher was sweet and made time for Jacob to celebrate with his class. Jacob felt so special and unique,” Celia says.

Rebecca Kunsberg, who directs her town’s Conservative Hebrew School, was deeply hurt by her daughter Emma’s declaration. “I explained to her that we are respectful of everyone’s faiths and lucky to learn about all different cultures, but Chanukah is ours and it doesn’t involve a tree.”

For the last two years, Rebecca has worked with her children’s teachers to bring Chanukah into the classroom. The three Kunsberg kids each choose their favorite menorah to bring to school. “They stand on a chair at the front of their classroom and tell their friends about their holiday,” Rebecca explains. “They are so proud, it makes my heart burst.”

Katherine Belilty, now eighteen and studying in Israel, finds herself especially looking forward to Chanukah this year. “It adds a whole new meaning to the holiday when you’re celebrating with others,” she says. “On Rosh Hashanah and Yom Kippur, I was in awe as I walked the streets. I was no longer the only one celebrating. It’s a far cry from my Texas hometown.”

Related Articles
View All
Chanukah
Is This Chanukah Story Too Violent For Children?
“Chanah and Her Seven Sons” is a classic Chanukah tale. It is a story of faith, courage, and resilience. But is also a story of…
Chanukah
How To Chanukah
The Menorah On each of the eight nights of Chanukah, this year beginning November 28 through December 6, we light the menorah. Here, in a…
Chanukah
Traditional Meets Unconventional: The World’s First Ever Chile Menorah Inaugurated in Santa Fe, New Mexico
Jewish tradition fuses with authentic New Mexican flavor in the “chile capital of the world”
Chanukah
Helicopters, Firetrucks, and Menorahs – Oh My!
For Chabad Rebbetzin Sarah Barash, dropping chocolate coins from a helicopter creates powerful educational moments
Get Inspiration to your inbox!
Newsletter
Join our weekly newsletter for inspiration and updates
Donate
Find Your Local Chabad Center
Subscribe
|
Log In
Chabad
About Chabad-Lubavitch
About Chabad Lubavitch
The Rebbe
Headquarters
Magazine
Magazine
News
News & Updates
In The Media
Impact
Social and Humanitarian
Social and Humanitarian
Education
Education
Community
Community