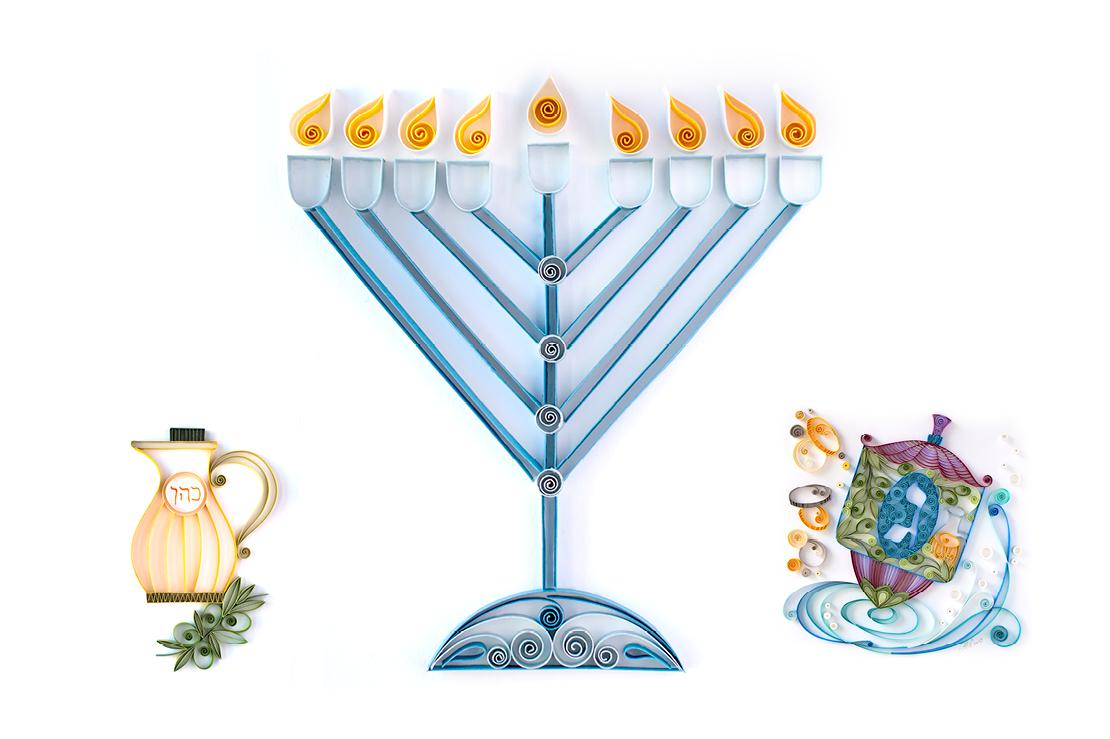 On each of the eight nights of Chanukah, this year beginning November 28 through December 6, we light the menorah. Here, in a nutshell, is how it works:

Though meant to recall the seven-branched candelabrum that once stood in the Temple, our modern-day menorah has eight lights, plus one more, known as the shamash, or “servant”, that serves to kindle the other lights and is set slightly apart from them. On the first night, close to nightfall, we use the shamash to light one lamp; on the second night, we add one more; and so we continue, adding another light each night so that by the end of the holiday we light all eight lights of the menorah.

Ideally, the lights must comprise fuel and wick—that includes candles, cotton wicks in olive oil, or paraffin lamps, but not gas or electric lights—and need enough fuel to burn for half an hour after nightfall. On Friday afternoon, the menorah is lit before the Shabbat candles, which are lit earlier than usual, before sundown, so make sure to use more fuel or longer candles. After Shabbat, be sure to wait until after nightfall and the Havdalah ceremony to light.

There are two blessings to be recited before lighting the menorah each night, and on your first time lighting this year add a third, the Shehechiyanu, a generic blessing for special occasions. After lighting, while watching the candles burn, the Haneirot Hallalu prayer is recited, along with other traditional songs.

The blessings provided here can be recited in Hebrew, transliterated Hebrew, or English. Recite all three before lighting for the first time this year, but only the first two on subsequent nights.

After sunset, recite blessings 1, 2, and 3* then kindle one light on your menorah.

After sunset, recite blessings 1 and 2, and kindle two lights on your menorah.

After sunset, recite blessings 1 and 2, and kindle three lights on your menorah.

After sunset, recite blessings 1 and 2, and kindle four lights on your menorah.

After sunset, recite blessings 1 and 2, and kindle five lights on your menorah.

After sunset, recite blessings 1 and 2, and kindle six lights on your menorah. The menorah must be lit before lighting Shabbat candles. Light Shabbat candles 18 minutes before sunset.

After night falls and Shabbat ends, recite blessings 1 and 2, and kindle seven lights on your menorah.

After sunset, recite blessings 1 and 2, and kindle eight lights on your menorah.

When is a spinning top not just a spinning top? When it’s a dreidel. The beloved Chanukah game—especially popular when played for chocolate coins—was popularized in eighteenth century Europe, although accepted attribution places its origin squarely in the Chanukah story. In this account, the four-sided top served as a pretense for Jewish children to gather and study Torah under Greek oppression.

A hundred more mystical, homiletic, and symbolic explanations dance atop the top’s little handle. The four letters inscribed on its sides (Nun, Gimmel, Hay, Shin) reference the historic Chanukah miracle; their numerical value is the same as that of Moshiach, pointing to our future Redemption; and, in a way, the dreidel tells the story of everything in between: As the centuries have turned, we Jews sometimes fall over, but then we persevere, get up again, and keep on spinning.

Everyone knows about Purim’s Scroll of Esther, but have you heard of the Chanukah Megillah? Many of the details of the Maccabees’ exploits come to us by way of a somewhat obscure text more commonly referred to as “The Scroll of Antiochus.” More details appear in other ancient sources, like the writings of Josephus and the Books of the Maccabees, but they have not survived as Jewish texts. There were also brief mentions by Greek and Roman historians of the ancient world like Diodorus and Tacitus.

Although, unlike Esther’s Megillah, the Scroll of Antiochus is not part of the Tanach—our holy Scriptures—it is however cited in Jewish sources going back to the Gaonic era. Rabbi Saadiah Gaon, a pre-eminent tenth century Babylonian Sage, traces the work back to the days of the Hasmoneans, although others contend it was composed closer to the Gaon’s day. Some communities have had the custom to read the Scroll aloud, and it has even been printed in some prayer books.

The two most famous, albeit brief, rabbinic accounts of the Chanukah story appear in the Talmud and in our liturgy. A few lines in tractate Shabbos explain just what the holiday is commemorating, while the V’al Hanissim prayer is inserted into the holiday prayers, and Grace After Meals gives a synopsis of the Chanukah miracles for which we give thanks to G-d.

Interestingly, these two sources emphasize different aspects of the Chanukah story: V’al Hanissim makes much of the Maccabees’ defeat over their foes, while the Talmud scarcely mentions the battles, and instead focuses on the miracle of the menorah.

All of which raises the question: Which of these miracles is more significant: The astonishing upset in war, or that marvelous oil that lasted for eight days? What do you think?

Along with the latkes, the doughnuts, and the chocolate coins, another important culinary custom on Chanukah is to eat dairy foods. As the story goes, the brave Yehudit (Judith) had the enemy general Holofernes let his guard down by posing as a collaborator, and then fed him salty cheese and plenty of wine. The wine went to his head, which—once he fell asleep—he promptly lost to her sword. The story is commonly placed in the Chanukah context, which is why it became an excellent reason to enjoy some cheese over the holiday, as well as the source of a special custom for women to take a break from doing work for at least the first half-hour of the menorah lights burning.

The scene of Yehudit, decapitating the general has also become a much frequented subject for artists since the Renaissance. From a sculpture by Donatello, through paintings from Baroque artists Carvaggio and Artemisia, to more modern interpretations by Kehinde Wiley (more famously known as President Obama’s portraitist). Judith on Red Square, by Russian-born Jewish artists Vitaly Komar and Alexander Melamid, reimagines Holofernes as Stalin and Yehudit as a young girl. There are even menorahs depicting the Chanukah heroine and the hapless Holofernes.

Related Articles
View All
Chanukah
Is This Chanukah Story Too Violent For Children?
“Chanah and Her Seven Sons” is a classic Chanukah tale. It is a story of faith, courage, and resilience. But is also a story of…
Chanukah
When Kids Are The Lone Menorah
Jewish students at secular primary schools all over the country face daily challenges to their cultural and religious identities.
Chanukah
Traditional Meets Unconventional: The World’s First Ever Chile Menorah Inaugurated in Santa Fe, New Mexico
Jewish tradition fuses with authentic New Mexican flavor in the “chile capital of the world”
Chanukah
Helicopters, Firetrucks, and Menorahs – Oh My!
For Chabad Rebbetzin Sarah Barash, dropping chocolate coins from a helicopter creates powerful educational moments
Get Inspiration to your inbox!
Newsletter
Join our weekly newsletter for inspiration and updates
Donate
Find Your Local Chabad Center
Subscribe
|
Log In
Chabad
About Chabad-Lubavitch
About Chabad Lubavitch
The Rebbe
Headquarters
Magazine
Magazine
News
News & Updates
In The Media
Impact
Social and Humanitarian
Social and Humanitarian
Education
Education
Community
Community