Millions Exposed to Holiday’s Message via the NFL 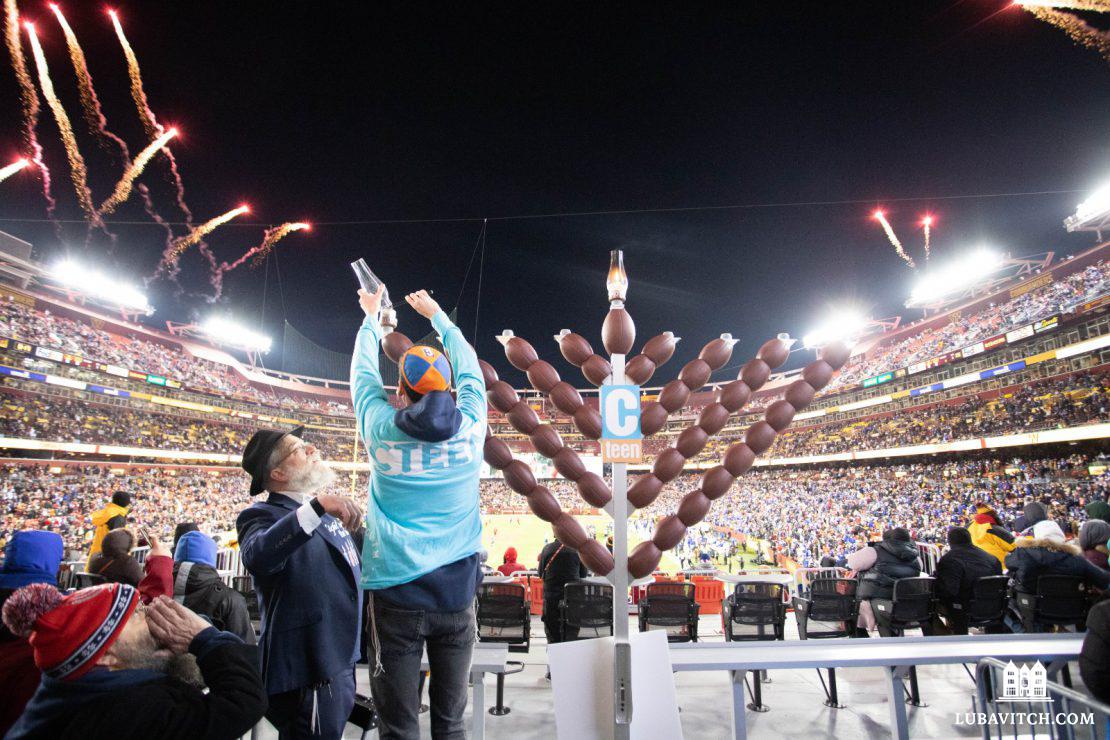 When the Washington Commanders took on the New York Giants at Maryland’s FedExField on Sunday, the stadium’s high-intensity lights received some assistance from a smaller, though significant source: a group of young people kindled a menorah on the field during halftime.

Over on the West Coast, where the Los Angeles Chargers battled the Tennessee Titans at Inglewood’s SoFi Stadium, CTeen youth leaders descended from the stands to help light the first Chanukah flame. Both lightings were broadcast live to millions of Sunday Night Football fans from coast to coast.

With hundreds of Jewish teens in the stands at both venues, Chabad’s teen network seized the moment to celebrate Chanukah’s message of freedom, unity, and pride.

In fact, he adds, an “anemic” game had been tied 7-7 at the fourth-quarter timeout when the menorah was lit. But then, Rabbi Yossi Mintz of Chabad of the Beach Cities, who helped coordinate the event, half-seriously “guaranteed” that within sixty seconds of the spreading of the menorah’s light, more points would be scored. In fact, the Chargers shortly scored a touchdown, and an ultimate 14-14 tiebreaker with a field goal.

At the Giants-Commanders game, CTeen chapters from across the Eastern Seaboard coordinated with Chabad of Maryland’s Rabbi Sholom Raichik for the on-field lighting of a giant menorah. Proud CTeen participants also gathered on the field post-game for a group photo.

Before the game, a parade of menorah-topped automobiles made its way to FedExField’s parking lot for a kosher tailgate party. In true Chanukah form, Chabad shared gifts of menorahs, latkes, and donuts.

The Chargers-Titans match-up was illuminated by a menorah lit by members of CTeen’s regional contingent during a late-game timeout. That event was coordinated by CTeen and Chabad of the Beach Cities’ Rabbi Mintz.

Inspired by the Lubavitcher Rebbe’s mission of bringing the light of Jewish pride to every corner of the world possible, grand menorah lightings in the most public of places have long been a staple of Jewish outreach activity by Chabad centers worldwide. The broad and diverse reach of Sunday’s NFL menorah lightings make them an impactful extension of this well-loved tradition.

The first menorah lighting at a major U.S. sporting event took place in 1987 in Hallandale, Florida, as Chabad emissary Rabbi Rafael Tennenhaus presided over a halftime menorah lighting at the arena then known as Joe Robbie Stadium (today Dolphin Stadium).

Related Articles
View All
Chanukah
Kindling Faith With The Chanukah Lights
Do miracles get in the way of your faith? Do you find them an obstacle to making a deeper commitment to Judaism? Many people find…
Chanukah
Is This Chanukah Story Too Violent For Children?
“Chanah and Her Seven Sons” is a classic Chanukah tale. It is a story of faith, courage, and resilience. But is also a story of…
Chanukah
How To Chanukah
The Menorah On each of the eight nights of Chanukah, this year beginning November 28 through December 6, we light the menorah. Here, in a…
Chanukah
When Kids Are The Lone Menorah
Jewish students at secular primary schools all over the country face daily challenges to their cultural and religious identities.
Get Inspiration to your inbox!
Newsletter
Join our weekly newsletter for inspiration and updates
Donate
Find Your Local Chabad Center
Subscribe
|
Log In
Chabad
About Chabad-Lubavitch
About Chabad Lubavitch
The Rebbe
Headquarters
Magazine
Magazine
News
News & Updates
In The Media
Impact
Social and Humanitarian
Social and Humanitarian
Education
Education
Community
Community