Ruminations on the Parsha: Shoftim 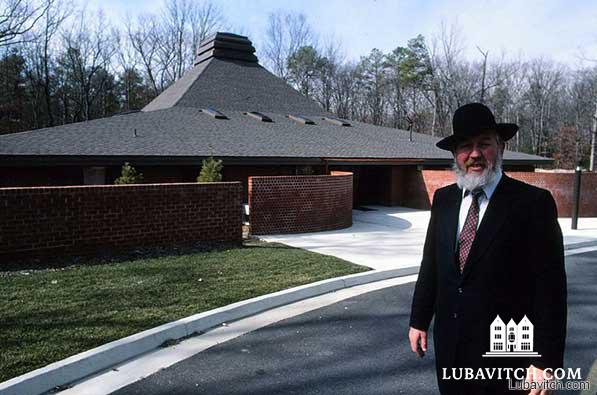 Rabbi Yankel Kranz, of blessed memory, in front of Chabad of Richmond, VA.

Today marks the yartzeit of my beloved father, Rabbi Yankel Kranz, of blessed memory. As you read this, I am on my way back from NY, where I prayed at his grave site and marked the Yartzeit with family. This year is special for us, as the yartzeit falls out on a Friday, exactly how it was when he passed away, 24 years ago on a Friday morning in Richmond. He was buried before Shabbat in the Chabad cemetery in New York.

This week’s Torah reading is the same as we read that Shabbat, the day after the burial. At the end of the portion of Shoftim, there is a deeply moving expression of communal responsibility that was at the heart of my father’s life. It is the story of a body found mysteriously at the edge of a city and of the eglah arufah, the broken heifer that is slaughtered as a sin offering by the city’s leaders. The elders of the closest city are commanded to verbally establish their innocence and yet, afterwards are also told to atone for their sin.

My father was once asked by a Federation leader what he hoped to accomplish in Richmond. His response was simple: “I want to sit down with every Jewish family in their living room,” he said. His goal was to meet the Jews of Richmond one by one and to ask what he could do for them. In the end, he found that the needs were diverse. Yes, he put up Mezuzahs on people’s doors. But he also started the Jewish News, a dating service called “The Chosen People,” and an innovative Jewish retreat center. He was many things to many people but his goal was always the same. He wanted to meet the needs of the Richmond Jewish community. He was the consummate Jewish leader.

The story of the eglah arufah, or broken calf, resonates personally with me as I remember my father today. In the dramatic biblical story of Jacob and his son Joseph, there is a reference to the eglah arufah. When Joseph sends a message to his father that he is alive and well and living in Egypt, he does so with wagons, filled with food. The Hebrew word for wagon, agalah, is similar to the word for the broken calf, eglah. In this way, Joseph was hinting to his father that he remembered that the last time they studied together, they learned this story about communal responsibly. It was this shared secret knowledge that made Jacob sure that the wagons were indeed from his long lost son.

A story of a father named Yaakov (Jacob) who shares Torah study with a son named Yosef (Joseph) is one that is deeply poignant for me. My father studied Torah with me and my brothers every day during the years we studied at the Richmond Rudlin Torah Academy. For my father, communal responsibility encompassed his family as well. As busy as he was, he put the spiritual needs of his children first.

I am grateful for what I learned from him then, and for what I continue to learn from him through the stories I hear from Richmonders every day. Ironically, I am now the senior rabbi in Richmond, the only rabbi who has stayed with his synagogue for all the years since my father’s death.

He had big shoes to fill, but I am determined to continue to work towards his goal and his vision of leadership.

Related Articles
View All
Chabad of NOVA Celebrates Sixteen Years
When Chabad of Northern Virginia celebrated their 16th anniversary with a black-tie dinner and concert, two weeks ago, more than 350 people came to pay…
Chabad of Richmond, Virginia, Celebrates
Chabad of Richmond, Virginia, recently celebrated the renovation of its center. Founded by Rabbi Yaakov Noach Kranz, of blessed memory and his wife Fay (Kranz…
Jewish Life in Michigan Booming At the 50 Year Mark
(lubavitch.com) Back when Detroit churned out gas guzzlers with fins and chrome and President Eisenhower started building the interstate highway system, a young couple–married just…
Richmond Celebrates New Mikveh
“A mikveh is the most vital institution in Jewish life. It takes precedence over the building of a synagogue or the writing of a Torah…
Editorial
Not by Fear But by Faith
The Rebbe’s Vision for a Just Society
Editorial
A Time to Heal
When the doors of Chabad Houses closed, and shluchim adopted social-distancing guidelines, we wondered how this edition of the magazine would take shape. More importantly,…
Editorial
Do We Need Anti-Semitism To Keep Us Jewish?
Swados asked the Rebbe whether it was his opinion, then, “that the tragedy was not a unique visitation upon the Jewish people, and that it…
Editorial
Soul Lights
Sitting with the Rebbe’s shluchim at the closing session of the Annual International Conference of Chabad Lubavitch Emissaries near the end of November, I felt…
Get Inspiration to your inbox!
Newsletter
Join our weekly newsletter for inspiration and updates
Donate
Find Your Local Chabad Center
Chabad
About Chabad-Lubavitch
About Chabad Lubavitch
The Rebbe
Headquarters
Magazine
Magazine
News
News & Updates
In The Media
Impact
Social and Humanitarian
Social and Humanitarian
Education
Education
Community
Community