Jewish Life in Michigan Booming At the 50 Year Mark 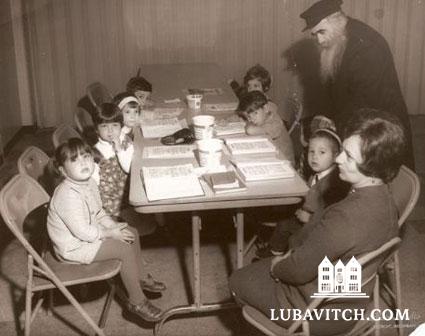 An early photo of a Chabad class in Detroit, Michigan.

(lubavitch.com) Back when Detroit churned out gas guzzlers with fins and chrome and President Eisenhower started building the interstate highway system, a young couple–married just twelve days–arrived in Michigan with a mission: reach and teach Jewish people before they were swallowed up in the glories promised by Americanization.

Rabbi Berel and Batsheva Shemtov set off a driving force for Jewish life that, at the half century mark, has no signs of slowing down. From very humble beginnings, Chabad centers in the state can now be found in 18 cities under the direction of 30 representatives.

At a recent gala to celebrate the half-century mark, announcements regarding $7 million worth of initiatives and campaigns demonstrated some of the breadth of Chabad’s work in the state. The elementary school and high school will undergo major renovations and expansions, a new 14,000 square foot building will house the Michigan Jewish Institute, a four year college in West Bloomfield; and new facilities will be built at the 500-campers sleep-away camp in Kalkaska.

Nearby is the Daniel B. Sobel Friendship House. Its programs and services assist people, regardless of religious backgrounds, on the road to recovery from addiction.

“It’s amazing how Chabad has penetrated the community, across all lives. They’ve increased the visibility of the Jewish community, and made everyone feel welcome,” said community member and supporter, Michael Leibowitz of Bloomfield Hills.

The story of Chabad in Michigan is an American epic. No matter what trend swept the United States, Chabad innovated and expanded to keep Judaism a priority. Throughout postwar prosperity of the 50s, anti-establishment 60 and 70s, and today’s openness to issues once swept under the rug, Chabad’s programs manage to be both of their times and timeless.

Rabbi Shemtov, who arrived in Detroit unable to speak English, remembers standing at the doorway of the Pullman car, watching the train station coming into view, and mulling over his instructions from the Lubavitcher Rebbe, Rabbi Menachem M. Schneerson, of righteous memory. “I was responsible for the 100,000 Jewish people in Michigan. I had no idea what I was going to do.”

They got to work right away, contacting Jewish community members. The clacking of their typewriter late into the night cost them their first home, a room rented from a Jewish widow for $18 a month, because of the noise.

The Shemtovs moved, because they were determined to make a lot of noise, bring Jewish pride out of hiding during the fifties, when conformity was king. On Sukkot, they built Michigan’s first truck mounted Sukkah booth, and some local Jews had a fit, a while later other Jewish groups adopted the idea. That was the pattern in the early days–push the envelope, stir up emotions, and watch the idea gain acceptance.

At the start, Chabad’s growth was organic, meeting needs as they were perceived. In the summer, the Shemtovs started a camp for Jewish children. It’s now 500 campers strong with an overnight component ushering in another 500 children.

“Our school is a source of energy for our future leaders, and now they will have a beautiful home,” said Rabbi Bentzion Stein, head of the elementary and high schools. Over the past decade, 200 of the school’s alumni have gone on to become Chabad representatives around the world from Oslo to Shanghai.

From the nucleus in Oak Park, and the newly acquired Congregation Mishkan Israel-Lubavitch Center, led by Rabbi Yankel Kranz, Chabad’s influence and activity spread. One of the initial expansion efforts brought Chabad to the University of Michigan in Ann Arbor, when peace and love and fighting the Power were still in the air. Informal classes run by Prof. Nissim Heyward, and later Rabbi Yitzchok Meir Kagan and Rabbi Yitzchok Mayer Lipszyc were brought to the attention of the Lubavitcher Rebbe who encouraged their efforts.

In 1975, Rabbi Aharon and Esther Goldstein arrived at U of M when campus activism and the inquisitive nature of the age primed students to seek Chabad as a resource. Located in a former frat house, selected with the advice of the Rebbe, Chabad’s work expanded to the community, but not before overcoming obstacles.

Despite the dearth of Jewish infrastructure in Ann Arbor–no Federation, no JCC were to be found–local Jews in the college town were “nervous about Chabad coming to town,” Rabbi Goldstein recalled. “My approach is to overcome confrontation with love. I never challenged. I smiled and invited them for Shabbos.”

With time, Chabad’s strategy yielded fruit. Adult educational classes, synagogue services, a preschool run throughout the year, with a day camp in the summer. The community also welcomed and supported 150 Russian-Jewish former refusenik families when they arrived in Ann Arbor.

U of M campus work continues as a separate division, now run by Rabbi Alter and Chanchi Goldstein. Growing up in Ann Arbor gave the younger Rabbi Goldstein a “head start” in understanding college students’ mindset. “Students are focused on studying, landing a good job, and it’s our job to help students see Judaism as something they want to incorporate into their lives and their future.”

Recently, Rabbi Goldstein saw evidence that the message is getting through. Chabad’s offer to lead a Birthright Israel – Mayanot trip was accepted by 100 U of M students. It’s the summer lull on campus now, but when classes resume, the Goldsteins will be hosting their usual 50 to 80 students at Shabbat dinner each week and 40 students at weekly classes with still more participating in the Sinai Scholars program of intensive study.

Some 25 minutes away, in West Bloomfield, another group of college students are served even more directly by Chabad. Students of the Michigan Jewish Institute are working toward their bachelors degrees in computers, business or Judaic studies at the accredited four-year college.

MJI is located on the 40-acre parcel of land that has been arguably the most fertile source of Chabad’s growth in the state in recent years. The $15 million Chabad Lubavitch Campus is also home to a synagogue, a center for children with special needs, and a center for addiction recovery.

“We are taking the mall approach. People come to the campus to volunteer with special children and find they can fulfill their religious needs, their educational needs at the same place,” said Rabbi Kasriel Shemtov, director of MJI and The Shul.

From camp to education, special needs to recovery services, synagogues to college campus work, Chabad has served 40% of Michigan’s Jewish population in one way or another.

“As Lubavitch reaches beyond serving its own, opens its doors to all, people look at the Jewish community with greater warmth,” said Leibowitz.

Rabbi Shemtov and the network of Chabad of Michigan representatives have no plans to slow down. They are determined, they say, to fulfill the Rebbe’s instructions and reach every Jew in the state.