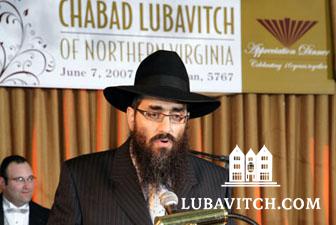 When Chabad of Northern Virginia celebrated their 16th anniversary with a black-tie dinner and concert, two weeks ago, more than 350 people came to pay tribute to the honorees and to Chabad for transforming Jewish life in Northern Virginia.

“The event was much more than a dinner – it was a simcha for our community and a reaffirmation of what we can do when we all work together” says Rabbi Sholom Deitsch, director of Chabad of NOVA.

During the last sixteen years, Chabad has made deep inroads into the Northern Virginia communities that lie just outside of Washington, D.C.

Today Chabad boasts three centers including its headquarters, the 5-acre community campus on Prince William road in Fairfax, Virginia. The redesigned facility features a synagogue, classrooms, outdoor pool and play area and a brand new Mikvah scheduled to have its grand opening in September.

The Fairfax campus has attracted dozens of area families who have purchased homes near the site and Shabbat afternoons are now characterized by families walking to shul and wishing each other a ‘good shabbos.’

In recent years Chabad of NOVA has branched out with satellite centers in
Arlington/Alexandria and Tysons Corner which are flourishing under the direction of Rabbi Mordechai and Yehudis Newman and Rabbi Levi and Miriam Deitsch respectively.

A fourth center is scheduled to open this fall in the Western Fairfax area under the direction of Rabbi Laibel and Nechama Fajnland.

Chabad of NOVA offers a host of programs for the Jewish community. They have become famous for their innovative Shalach Manos project; outstanding adult education and holiday programming; missions to Israel; a unique Midrasha high school program for teenagers; the annual Chanukah Wonderland; a pioneering Gan Israel Preschool and successful summer and winter camps.

The announcement that a new kosher take-out store is soon to open at the Fairfax campus was greeted with animated applause by the dinner participants.

Rabbi Deitsch paid tribute to the evening’s honorees: Gesher Jewish Day School, Carol and Richard Bronowitz and the Lamplighter Awardees, Irv and Darren Bernstein who dedicated the synagogue sanctuary in memory of their parents and grandparents, Hyman and Edith Bernstein.
In accepting the award, Darren Bernstein recalled the first time he met Rabbi Deitsch. “We were in the emergency room, completely devastated by the passing of my grandfather, when suddenly a young man, dressed in black, appeared seemingly out of nowhere to console us in our time of need”
“That was my introduction to Chabad and was the start of a magical relationship that has become more and more important over the years to my life and to my family’s life.”
Richard Bronowitz also articulated the impact Chabad has made on his family.  Sixteen years ago, he and his wife Carol were seeking a more Jewishly committed lifestyle and were planning to relocate. They had already put their house on the market when they met Rabbi & Chanie Deitsch who impressed them with their enthusiasm and warmth as they passionately laid out their plans for creating a Jewish atmosphere in Northern Virginia.

“Chabad showed us a path to practice and to spirituality that we had never felt before” said Bronowitz. “We took our house off the market and I was privileged to become the first president of Chabad of NOVA and just like that, our lives changed.”

Barely containing his tears, Bronowitz said “my three children today are observant and committed Jews and my grandchildren are continuing on that path.”

“Chabad showed us that Judaism can flourish wherever there is  even a tiny spark that can be ignited.”

Mrs. Chanie Deitsch invoked the memory of her father, Rabbi Yankel Kranz, founder of the Richmond-based Chabad of the Virginias, in her welcoming remarks.

“Sixteen years ago, my father heard that there were individuals in Fairfax who were looking for a traditional rabbi” said Chanie. “That was enough for my father – he offered us the position and in a few weeks, we were there.”

Chassidic superstar Avraham Fried, electrified the audience with his masterful and poignant opening rendition of G-d Bless America and “Jerusalem of Gold” and continued with his trademark of energetic and spirited tunes which had everyone up on their feet and dancing around the room.