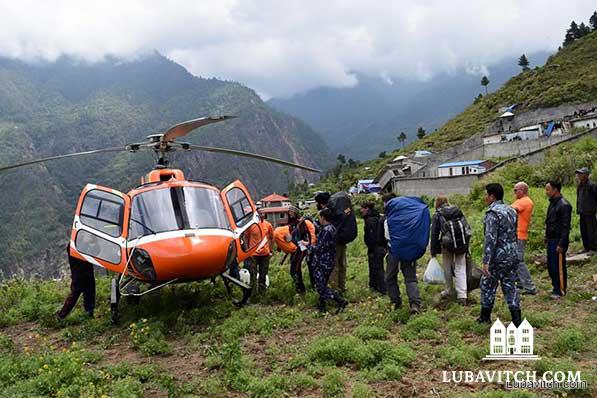 A helicopter lands in a remote area to rescue stranded trekkers.

After days of exposure to the elements following Saturday’s 7.8 earthquake, 25 Israeli backpackers were airlifted to safety by Rabbi Chezki Lifshitz and volunteers who reached them by helicopters on Wednesday morning. Exhausted, they arrived at Chabad to a home-cooked meal, warm, clean clothing, and a very emotional welcome by friends who were praying for the safe return.

The Chabad House in Kathmandu, Nepal, has been a magnet for people seeking food and refuge since the quake left the country without power and basic necessities. Chabad representatives and volunteers participated in search and rescue missions by motorbikes and helicopters. They also searched among the dead for Jews, with the intention of ensuring they would have a Jewish burial.

As the search continues for missing Israelis, three of them, Alin Gaon, Shagei Rakhvoakh and Amit Tsangut, walked into the Chabad House on Thursday morning, after a five-day trek from the Langtang National Park. “We were desperately searching for them for days,” Rabbi Chezki says. “We will make sure to help them regain their strength here.”

Many of the stranded survivors, were located by Lifshitz through the satellite phones provided by Chabad before their trip.

The phones transmit the locations of the trekkers to the computer back in Kathmandu, making it possible for Lifshitz and volunteers to rescue them. The idea, to provide trekkers with satellite phones, implemented last week in response to incidents in which backpackers were lost and had no way of communicating, proved a lifesaving one as soon as the earthquake struck.

By local tradition, the remains of those who were killed in the calamity are cremated. “We are racing against time to ensure that no Jewish remains will face that destiny,” says Chani Lifshitz, According to Jewish law, human remains need to be buried in the ground.

Over the past few days, many Israelis have made their way back on El Al flights that brought Israeli rescue teams to the country. The flights also brought provisions for the Chabad House, where Israeli and Nepali volunteers are making food for the many Nepali survivors whose homes were destroyed by the earthquake.

Chabad rabbinical students and stranded Israelis then brought the food to a local refugee camp and served bowls of rice and distributed bottled drinks.

“What you are doing for the entire society and surely for the Israeli citizens that are there is outstanding,” the President told the Lifshitzs. “The way you opened your home to these people in their difficult times is tremendous.”

Speaking to her mother from the President’s residents, six-year-old Rivky wanted to know how long before she goes back home. Her mom, indefatigable Chani Lifshitz, reassured her that as soon as the crisis is over and the people who need their assistance are ok, they will be reunited.

Israel’s president promised Chani that her children are in good hands: “The same way you opened your home to all, we have opened our home to your children,” Rivlin said. “Through your kids we want to say thank you.”

Related Articles
View All
Nepali Locals, Travelers, Find Food, Solace at Chabad
“Our greatest worry now is to make sure that anyone who comes to the Chabad House should have a hot meal,” the Chabad representative says.
Nepal Jewish Leaders Appeal For Help As Crisis Deepens
“The country is devastated, buildings that once proudly stood are now rubble, streets that once were bustling are now deserted,” says the Chabad representative.
Chabad Provides Himalayan Trekkers With Satellite Phones
The breathtaking views from mountain precipices and jagged cliffs beckon, but with real danger, and invariably, Chabad is called in on rescue missions when hikers…
Survivor of Nepal Bus Accident Grateful For Chabad Rabbi
The Nepalese man arrived at the Chabad House last Monday “looking for the man with the white shirt and the beard.”
Bim, The Boy From Nepal
He’s the good looking, buoyant 12 year old Nepalese boy who greets visitors to Katmandu’s Chabad House with a huge smile: “Hi I’m Bim, the…
Nepal Earthquake Survivors Flock To Chabad
In the midst of Shabbat morning prayers at the Chabad House in Kathmandu, Nepal, a 7.8 magnitude earthquake hit the country. The death toll is…
Get Inspiration to your inbox!
Newsletter
Join our weekly newsletter for inspiration and updates
Donate
Find Your Local Chabad Center
Subscribe
|
Log In
Chabad
About Chabad-Lubavitch
About Chabad Lubavitch
The Rebbe
Headquarters
Magazine
Magazine
News
News & Updates
In The Media
Impact
Social and Humanitarian
Social and Humanitarian
Education
Education
Community
Community