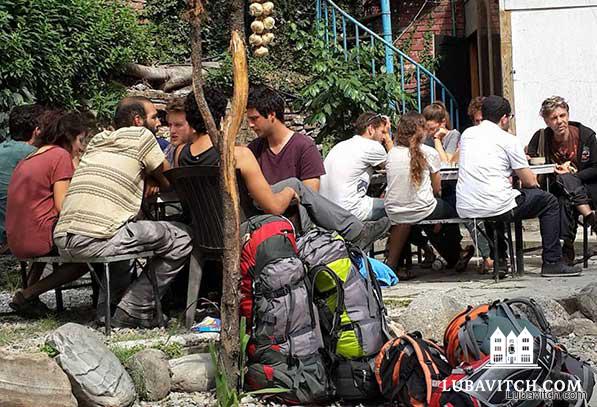 The courtyard at the Chabad center in Kathmandu, Nepal, has turned into a gathering place for Israelis, seeking food and shelter.

As the death toll rises to over 2500 in Kathmandu, Nepal, after a 7.8 earthquake on Saturday and equally terrifying aftershocks reaching magnitudes of 6.7, rescue and medical teams from across the globe are heading towards the country. With the Nepalese airports in disarray, two El Al planes of Israeli rescue teams were delayed—but finally left Israel on Sunday night.

The flights will bring home Israelis stranded in Kathmandu—a popular destination for young Israelis who now find themselves stranded far from home, without means of obtaining food or shelter, and no way of getting onto a commercial flight home.

“It is dangerous to remain inside buildings, an aftershock could cause the building to topple on its inhabitants,” says Chezki Lifshitz, who stops in middle of the call to run outside of the Chabad Houses, as aftershock tremors begin, some being felt as far as New Delhi, India. “The Chabad House has a huge open space outside, uncommon in the city,” he explains, which has now become a relatively safe place for survivors to wait the crisis out.

With over 180 Israelis still unaccounted for in the country, the Chabad House in Nepal has continued to be the central location many of the two-thousand Israeli backpackers. Chani Lifshitz reports that the city is in the dark, the Chabad House, is running off generators and the phones are working sporadically.

“The country is devastated, buildings that once proudly stood are now rubble, streets that once were bustling are now deserted,” says Chani. “Our backyard has become a refugee camp and people are in a daze.”

The Chabad representatives are serving meals every hour on the hour, but supplies are running low according to Chani. “With food low and difficulties obtaining food from local sources, we need to bring food from out of the country,” she says. “And we need funds to make this possible.”

Among those who’ve made their way to Chabad, many have nothing but the clothing on their back. Many are injured. The need, say the Lifshitzs, for clothing and basic medical provisions is urgent. “At this time we need all the help we can get to help those on the ground to survive the current destruction,” the rabbi says.

Related Articles
View All
Chabad Provides Himalayan Trekkers With Satellite Phones
The breathtaking views from mountain precipices and jagged cliffs beckon, but with real danger, and invariably, Chabad is called in on rescue missions when hikers…
Search and Rescue Mission for Israelis in Himalayan Storm
The mood is somber at the Chabad House in Kathmandu, Nepal, after a storm in the Nepalese Himalayan region last week left four Israelis dead.
Survivor of Nepal Bus Accident Grateful For Chabad Rabbi
The Nepalese man arrived at the Chabad House last Monday “looking for the man with the white shirt and the beard.”
Bim, The Boy From Nepal
He’s the good looking, buoyant 12 year old Nepalese boy who greets visitors to Katmandu’s Chabad House with a huge smile: “Hi I’m Bim, the…
Nepal Earthquake Survivors Flock To Chabad
In the midst of Shabbat morning prayers at the Chabad House in Kathmandu, Nepal, a 7.8 magnitude earthquake hit the country. The death toll is…
Get Inspiration to your inbox!
Newsletter
Join our weekly newsletter for inspiration and updates
Donate
Find Your Local Chabad Center
Subscribe
|
Log In
Chabad
About Chabad-Lubavitch
About Chabad Lubavitch
The Rebbe
Headquarters
Magazine
Magazine
News
News & Updates
In The Media
Impact
Social and Humanitarian
Social and Humanitarian
Education
Education
Community
Community