Bim, The Boy From Nepal 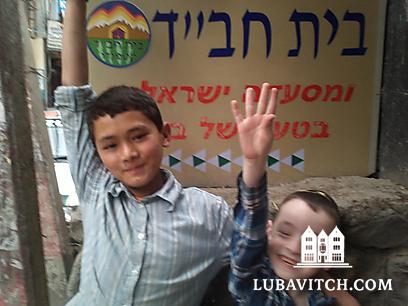 He’s the good looking, buoyant 12 year old Nepalese boy who greets visitors to Katmandu’s Chabad House with a huge smile: “Hi I’m Bim, the boy from Beit Chabad,” he offers happily. He’s also quick to provide unsolicited bits of useful information, like candle-lighting time on Friday, or that Shabbos is not out until three stars are spotted in the sky.

Bim arrived at the Chabad House last year, naked but for a plastic bag that he used for some cover. One of hundreds of children exploited for profit on Kathmandu’s dangerous streets, he fixed his eyes on a Chabad rabbinical student, and asked for help. He wouldn’t leave go until the student brought him back to the Chabad House.

Chezki and Chani Lifshitz, Chabad representatives here have become beloved figures in Kathmandu, especially to thousands of Israeli backpackers who flock to the Himalayas after completing their service in the IDF. (The Lifshitzs were the inspiration for a wildly popular Israeli TV series based on their day-to-day lives as Chabad Shluchim who set up a Chabad House in this third world backwater.)

After 13 years of living here, the Lifshitzs have not become hardened to the poverty and the human suffering that are everywhere in this slum city. “My grandmother is a Holocaust survivor,” Chani says. “I learned from her not to ignore the pleading eyes of a child in need. Bim was not going to survive—that much was obvious,” she says.

Saving the Life of A Child Beggar

The boy screamed in pain as Chani and Chezki gently washed his lacerated, severely malnourished body. Scars and bruises—from beatings by his traffickers disappointed in his take home after a day on the streets—were raw. They brought a doctor in to administer first aid. They cut his long, matted hair and uncovered a beautiful face. They fed him, clothed him and made him comfortable.

What made Bim know to ask for the Chabad House?

“He had heard of the Chabad House, the Jewish place where people find help,” Chani explained in a phone conversation with lubavitch.com.

Bim had no normal socialization. “He was not raised as normal children are, and he had to learn basic behaviors.” He also needed psychological therapy and professional help to wean him from a substance dependency (inhaling glue) that many of the street children cultivate in Kathmandu. Then his traffickers, unwilling to give Bim up as a source of income, began to harass and intimidate the Lifshitzs.

With five of their own young children to care for, and long days filled anticipating and answering the needs of an endless stream of visitors to their Chabad House—the address for every exigency arising among the young and restless Israelis traveling dangerously in remote mountain ranges, were these Chabad representatives getting in deeper than they meant to?

It was a question that surely crossed their minds those first days with Bim. Adopting a Nepalese child is not exactly what Chani and Chezki expected they’d be doing as Chabad Shluchim. “But we asked ourselves, ‘what would the Rebbe advise us to do?’” Chani says. “There’s no question he’d tell us to do whatever we can to save his life.”

Chezki and Chani paid Bim’s handlers for his release, and gave him a new life in the bosom of their family. The Lifshitz children surrounded him with warmth and acceptance, and he integrated quickly. “My children have been amazing, full of love and appreciation for Bim. They’ve learned so much from him—gratitude for the things in life they never had to think about before . . . like having parents.”

“Ima Chani” and “Abba Chezki” as Bim likes to call his adoptive parents, enrolled Bim in a private school where he is proving to be a fast learner and a high achiever. “Last year he did not know how to read or write. Now he’s reading and writing in three languages. He’s skipped two grades since he started formal schooling,” says Chani, kvelling like any good Jewish mother. “He’s incredibly bright.”

Bim is not Jewish, but that’s not relevant, Chani says, and converting him is not on the agenda. “We did not adopt him to make him Jewish. We adopted him to save his life, to give him the opportunity to grow intelligently, with happiness and love.”

But Bim has something more in mind. Precocious and very proud of his adoptive Jewish family, he tells visitors that he’ll be having a bar mitzvah next year just like his “older brother” did. He insists that his Jewish name is Binyamin. And he’s learning Hebrew.

The Passover Seder in Kathmandu—with about 2,000 guests—is one of the largest and most popular worldwide. Chezki and Chani invest weeks of preparation. Speaking from Israel where she is adding Passover provisions to a shipping container that will arrive in Kathmandu for Passover, Chani is clearly the skilled multi-tasker. Back home, her husband is taking care of logistics at the Chabad House. Reservations for the legendary Seder are quickly filling up, and Bim and his siblings are pitching in as well.

The Lifshitzs never sought to publicize Bim’s story. “Bim’s been with us for a year and a half now,” says Chani, and we never thought about bringing this to anyone’s attention.” But with so many visitors making their way to the Chabad House, the story about the Nepalese boy who seems to know more about Judaism than many of the Israeli travelers who come there, finally made Israeli news.

The story then garnered attention in Nepal as well. “We’ve had representatives of various agencies and organizations, most recently from the UN who come to our Chabad House wanting to learn more.”

“I hope this will raise awareness of the plight of Nepal’s street children,” Chani says. “Imagine if more children like Bim would be saved.”