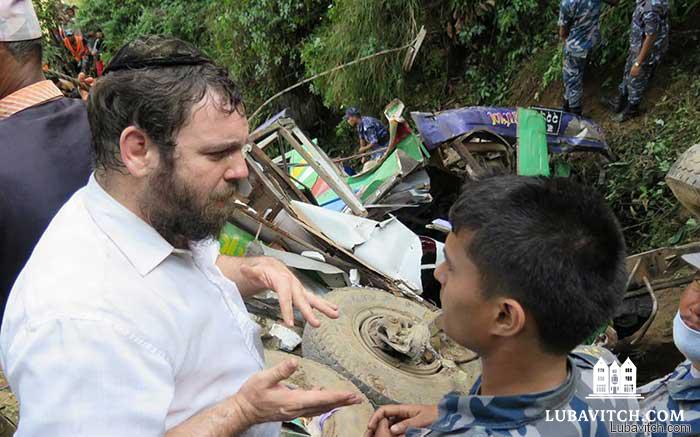 Rabbi Chezki Lifshitz on the site of the accident (above). Below is Nirmil in from of the Chabad House.

The Nepalese man arrived at the Chabad House last Monday “looking for the man with the white shirt and the beard.”

Nirmil traveled a difficult distance, taking several buses to get to the rabbi. “That was the man who poured water on me, woke me from my faint and helped me stand on my feet,” he said pointing to Rabbi Chezky Lifshitz.

Nirmil was a passenger on a private tour bus that fell of a cliff on Friday while traveling a hilly route from Kathmandu to the Langtang national park in Nepal. The accident followed another the week before, when unusual weather caused some thirty-nine deaths. Still in the throes of the chaos of that first tragedy, Rabbi Lifshitz, Chabad representative to Nepal made his way by helicopter to the bus site, just outside of Kathmandu, to see how he could assist.

At the scene of the accident, Lifshitz spoke to those who survived and helped see to it that they were getting the proper care before heading back to the Chabad House to prepare for Shabbat.

Nine people died and twenty-seven were injured in that accident. Among them were Israeli tourists, two who died and four who were injured. The Chabad representatives arranged for their bodies to be transported to Israel and followed up with those recovering in the hospital.

With tears in his eyes, Nirmil told the rabbi that he wanted to thank him. “Only yesterday, I finally found out that it was you who saved my life,” he said. The Nepalese citizen asked to be photographed outside the Chabad House, so he could hang the photo in his room and always recall who saved him.

“To reach the Chabad House he had to travel on four buses for three hours,” says Chani Lifshitz, touched at the pains he took to express his gratitude. “We could all learn from him.”

Related Articles
View All
Search and Rescue Mission for Israelis in Himalayan Storm
The mood is somber at the Chabad House in Kathmandu, Nepal, after a storm in the Nepalese Himalayan region last week left four Israelis dead.
Nepalese Prime Minister Meets With Chabad Leadership
The Prime Minister pledged to strengthen his government’s relationship with Chabad in Nepal. He also affirmed his country’s long-standing support of the Jewish state.
Bim, The Boy From Nepal
He’s the good looking, buoyant 12 year old Nepalese boy who greets visitors to Katmandu’s Chabad House with a huge smile: “Hi I’m Bim, the…
In Nepal, Israelis Examine Jewish Identity
Dhulikhel, a resort village with panoramic views of the famous Himalayan mountain ranges, is an idyllic setting for soul searchers. Here, Chezi Lifshitz, the Chabad…
Finding Judaism in Nepal, Celebrating in Israel
It was meant to be a small reunion of Israeli backpackers who had spent time with Rabbi Chezky and Chani Lifshitz at the Chabad House…
Get Inspiration to your inbox!
Newsletter
Join our weekly newsletter for inspiration and updates
Donate
Find Your Local Chabad Center
Subscribe
|
Log In
Chabad
About Chabad-Lubavitch
About Chabad Lubavitch
The Rebbe
Headquarters
Magazine
Magazine
News
News & Updates
In The Media
Impact
Social and Humanitarian
Social and Humanitarian
Education
Education
Community
Community