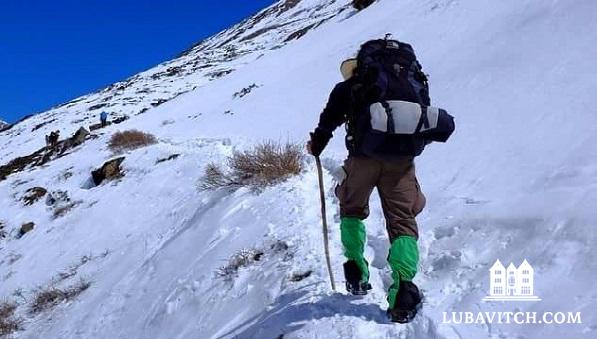 Trekking up the Himalayan mountains. Below: Hikers as seen on the computer in the Chabad House in Kathmandu and Rabbi Chezki Lifshitz reviews hikers on their routes.

It has become a rite of passage for IDF soldiers: relieved of their army service, thousands trek the Himalayan mountain ranges and find relief from the stresses of their military service.

The breathtaking views from mountain precipices and jagged cliffs beckon, but with real danger, and invariably, Chabad is called in on rescue missions when hikers go missing. With limited or no cellphone reception in these remote areas, just trying to locate them them in the mountainous region consumes precious time when immediate life support is needed.

The problem, all too familiar to Rabbi Chezki and Chani Lifshitz, leaders of the popular Chabad House in Kathmandu, has compelled them to come up with a solution: they will now be providing satellite phones for trekkers to take with them when they go backpacking.

“The phones let us know exactly where trekkers are when a tragedy hits,” says Chani Lifshitz. This, she says, will allow them to be located and save precious time “guessing where they may be in this huge region.”

The phones transmit the locations of the trekkers to the computer back in Kathmandu, where Lifshitz and volunteers could follow their movements to see if they are hewing to designated paths or if they’ve gotten lost. Satellite access makes it possible to reach out to anyone they feel is in trouble.

Lifshitz points to the Israelis who were trapped in the October blizzard while hiking in the Himalayas. One trekker wrote a note about their dire situation and gave it to a local Nepali who knew the terrain and got it to an Israeli who had access to a phone. The note alerted the Israeli embassy, who turned to Chabad for assistance in assisting in the rescue.

“We want the families of those who were so tragically killed last year to know that we will never forget their loved ones. This project will prevent more casualties,” Lifshitz says. “We also want to assure parents of trekkers that if they are ever worried about their children, we will now have a better way of accessing them.”

Related Articles
View All
Search and Rescue Mission for Israelis in Himalayan Storm
The mood is somber at the Chabad House in Kathmandu, Nepal, after a storm in the Nepalese Himalayan region last week left four Israelis dead.
Survivor of Nepal Bus Accident Grateful For Chabad Rabbi
The Nepalese man arrived at the Chabad House last Monday “looking for the man with the white shirt and the beard.”
Bim, The Boy From Nepal
He’s the good looking, buoyant 12 year old Nepalese boy who greets visitors to Katmandu’s Chabad House with a huge smile: “Hi I’m Bim, the…
Finding Judaism in Nepal, Celebrating in Israel
It was meant to be a small reunion of Israeli backpackers who had spent time with Rabbi Chezky and Chani Lifshitz at the Chabad House…
Get Inspiration to your inbox!
Newsletter
Join our weekly newsletter for inspiration and updates
Donate
Find Your Local Chabad Center
Subscribe
|
Log In
Chabad
About Chabad-Lubavitch
About Chabad Lubavitch
The Rebbe
Headquarters
Magazine
Magazine
News
News & Updates
In The Media
Impact
Social and Humanitarian
Social and Humanitarian
Education
Education
Community
Community