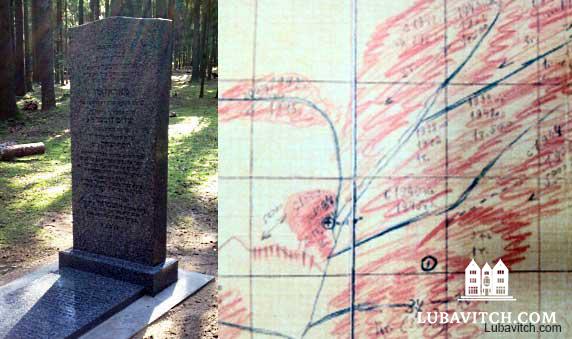 The new tombstone and the old map with the exact location of the mass grave.

After years of digging through the files of the KGB—the communist state security agency formerly known as the NKVD—a mass grave with over a dozen Chabad-Lubavitch followers murdered at the hands of the Soviets in 1938, was located and marked with tombstone last week.

Today, Rabbi Mendel Marosov, 98, takes a break from studying a scholarly Jewish book to recall those days when his father and brother were taken away. “For many years we did not know what happened to father. The NKVD told us that they cannot divulge any information about his whereabouts,” Morosov told lubavitch.com.“We did not know that he was executed until many years later.”

Upon his release he settled in St. Petersburg, then called Leningrad, and resumed his activities, organizing clandestine adult education classes in Jewish studies at night. The NKVD put out a warrant for his arrest and thus his life on the run began. To evade them, he changed his name to Duber Posner and disguised his appearance. But in 1938, at age 61, he was among at least a dozen leaders of the Chabad underground who were arrested, their fate unknown for years.

In 2008, with the family still in the dark, one of Morosov’s great-grandchildren visited the city. He turned for help to Rabbi Ifrah Abramov, an educator in the local Chabad school. Abramov began searching the NKVD archives.

Since then he uncovered thousands of pages of testimony given by the victims during their interrogation. “He came to my home and presented me with the documents,” says the 98-year-old son. “I made one request: if he finds my father’s gravesite, he should erect a tombstone.”

Abramov continued his search. In 2012 he learned that all those rounded up on that spring night in 1938 were summarily executed. They were buried in the Levasovskoj government cemetery. Now the date of their deaths was finally known.

When Abramov came to the cemetery to find out where the group was buried, he was brushed off. He persisted, negotiating an obstacle course of bueraucratic red tape, until, in the spring of 2014, cemetery clerks pulled out old maps and Abramov found the exact location they were buried.

Recently, permission was granted to erect a marker on the site, a development late in coming for the nonagenarian rabbi who has difficulty getting around inside his home.

“I myself can’t travel to the cemetery. But at least now my family can go and pay their respects. There is finally a matzevah, [tombstone] and for this I am grateful.”

Related Articles
View All
Scion of Chabad Musical Family Passes Away
Rabbi Shamshon Charitonow, an expert on Chasidic melodies and a survivor of Soviet oppression, passed away last Thursday, Nov 26, in Brooklyn. He was 91…
In Conversation: Natan Sharansky
Mr. Sharansky met with Baila Olidort at his office at the Jewish Agency’s headquarters in Jerusalem, where he talked about his vision, his respect for…
Russian Jews and The Matzah Factor
It’s a yearly ritual that has a mysterious tug on hundreds of Russian Jewish families across New York City. Shortly after loads of matzah boxes…
PROFILE: Rabbi Dovid Okunov, Noted Chabad Personality Remembered
It was 28 years ago this week that Rabbi Dovid Okunov, a bold Russian activist for Judaism who risked death defying communist authorities by teaching…
Defying Her Tormentors: A Survivor’s Legacy
Defiance marks her face with hundreds of little wrinkles, each etched into her skin by trials and tribulations of a saga that begins at the…
Features
Our Most-Read Articles Of 2021
The following were the 10 most-read originally produced articles that published on Lubavitch.com
Features
Should I Let My Kids Go Caroling?
My kids are part of a local choir, can I let them join their friends to go caroling around the neighborhood? If I add some…
Features
Reb Yoel: Reflections On A Chasidic Prodigy
He shaped the contours of Chabad scholarship over the course of seventy years
Features
Remembering Chabad’s Beginnings, 223 Years Ago
It is the date on which, in 1798, Rabbi Schneur Zalman of Liadi, the founder of Chabad Chasidism, was released from Czarist imprisonment.
Get Inspiration to your inbox!
Newsletter
Join our weekly newsletter for inspiration and updates
Donate
Find Your Local Chabad Center
Subscribe
|
Log In
Chabad
About Chabad-Lubavitch
About Chabad Lubavitch
The Rebbe
Headquarters
Magazine
Magazine
News
News & Updates
In The Media
Impact
Social and Humanitarian
Social and Humanitarian
Education
Education
Community
Community