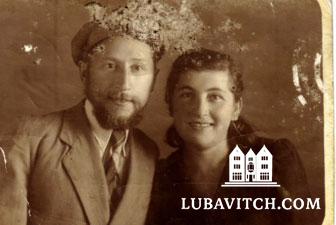 Rabbi Dovid Okunov and his wife, Bassia, in an early photo.

It was 28 years ago this week that Rabbi Dovid Okunov, a bold Russian activist for Judaism who risked death defying communist authorities by teaching Jewish children Torah, was gunned down on a Brooklyn street. .

In 1979, Okunov, a free man in the U.S., and a world away from the dark, oppressive forces of the former Soviet Union, was still working to assist Jews who were trapped there. On Thursday, October 25, as he walked to morning services near his home in Brooklyn, a young black man seized his blue velvet bag containing his talit and tefillin, and shot him in the head, instantly killing him.

Born in Ukraine in 1911, Rabbi Okunov grew up in repressive times for Jews.  The Russian Revolution, a series of severe political upheavals begun in 1917, made it dangerous for Russian Jews to study Torah and be observant.  Yet Okunov’s parents hired a teacher to tutor him at home.

After bar mitzvah, at 13, Okunov wanted to continue his studies at the underground Tomchei Temimim Yeshiva founded by the sixth Chabad-Lubavitch Rebbe, Rabbi Yosef Yitzchak Schneersohn, in Kremenchuk, Ukraine.  His parents, however, refused, due to the perils associated with such activities.

Okunov went on a hunger strike for two days, and his parents relented.  Risking his life to become a Torah scholar, a rabbi, and a Chabad-Lubavitch chasid, Okunov went on to teach others in underground classes.

In 1947, the KGB discovered that Okunov was a follower of the Lubavitcher Rebbe in America and began to pursue him. Friends alerted him and Okunov fled to his parents’ home in Ukraine. Three years later, Rabbi Okunov made aliya with his four children. His wife, Bassia, had passed away a few years earlier.

During the shiva for Rabbi Okunov, the Rebbe instructed that a yeshiva be built in his honor, to serve the needs of boys whose families hailed from the Soviet Union.  Thus the fledgling yeshiva run by the Friends of Refugees of Eastern Europe (FREE) expanded and was renamed Yeshivat Ohel Dovid.

F.R.E.E, whose raison d’etre was to provide Eastern European refugees with their material, educational, and spiritual needs, was established in 1969.  The organization founded the first Jewish high school for Russian-American boys in the U.S.

In 1974, F.R.E.E expanded the yeshiva by creating the first elementary school in the U.S. for Russian immigrants.  The yeshiva provides boys with a foundation in both Torah studies and secular subjects.  Classes are offered in Russian for students who are not proficient in English.

Fully accredited by New York State and the Board of Regents, Yeshivat Ohel Dovid has shepherded more than 7,500 students through its halls.   More than 1,000 students from the school have entered college and become teachers in Jewish day schools, doctors, lawyers, and engineers, among other vocations.

Rabbi Okunov was laid to rest in Old Montefiore Cemetery in Queens, not far from the resting place of the Rebbe.  A black teenager, Caroll Miller of Crown Heights, was tried and sentenced to 22 years in prison on charges of pre-meditated murder, with the motive of robbery.