Russian Jews and The Matzah Factor 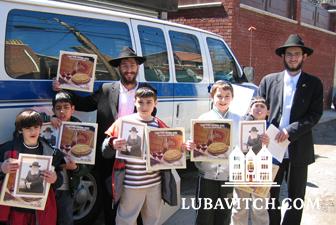 Russian Jews who otherwise assimilate into every other aspect of American life, will put business calls and college courses on hold to get their matzah for Passover.

It’s a yearly ritual that has a mysterious tug on hundreds of Russian Jewish families across New York City. Shortly after loads of matzah boxes are shifted, by truck and minivan, to their pick up points in Brighton Beach, Gravesend and Crown Heights, Russian Jews who otherwise assimilate into every other aspect of American life, will put business calls and college courses on hold to get their matzah for Passover.

Russian Jews’ love affair with matzah is evident on a cold spring morning. Cars pull up to Friends of Refugees of Eastern Europe, double park, and drivers scramble up the steps to retrieve the allotment – several boxes of matzah and a holiday guide printed in Russian. Still more have lined up in the lobby, waiting their turn with the patient air of those who recall old Soviet food lines. They come because they’ve heard the Passover advertisements on 620 AM radio. They come because this is what they’ve done ever since they reached America. The scene – stacks of matzah, Passover pamphlets, invitations to massive public Seders, Russian Jews in lines – is repeated from the backwater towns of Siberia to the Russian enclaves in Israel, Chicago, Los Angeles, Toronto and beyond. Across the former Soviet Union, the 450 communities that comprise the Federation of Jewish Communities anticipate the distribution of over one million pounds of matzah.

Where other Jewish practices got squeezed from the collective memories of Soviet Jews by force of the Communist fist, the imperative of eating matzah on Passover survived. Perhaps it’s because their experiences parallels in some way, the biblical Exodus. Crunching into a piece of matzah, bubbles of singed gluten snapping, evokes the images refugees on the run, future unknown. Who else would accept the staff of life in the form of a cracker that rakes the vulnerable flesh of the palate?

Devotion to the mitzvah of matzah runs deep in the history of Jews behind the Iron Curtain. It’s hard to picture the septuagenarian Rabbi Berel Zaltzman, spiritual leader of Bris Avrohom in Fairlawn, NJ, gunning the engine of a motorcycle, but that’s what he did. In the late 1950s, as Passover approached, the underground Lubavitch community in Moscow swung into covert matzah production beneath the watchful eye of the KGB. Rabbi Zaltzman, then a daring twenty-something, rode off to a distant Russian village with a respected rabbi riding shotgun. A wheat farmer bought Rabbi Zaltzman’s story that Jewish wedding bread needed supervision from the time of the wheat harvest. Plied with some vodka and rubles, the farmer drove the combine across the field with the two rabbis perched on its sides, watching and designating the harvest for matzah. Ten sacks of kosher for Passover kernels generated from the adventure were distributed to the secret matzah bakeries across Moscow and Leningrad (now S. Petersburg). Specially cleaned meat grinders were pressed into service to mill the flour. “Everyone received 750 grams of matzah for the entire Pesach. The rest of the week no one had any matzah,” said Rabbi Zaltzman.

As a child growing up in Kiev in the 1970s, Ross Furman remembers eating matzah. “I thought it was Jewish crackers. I didn’t know it had any connection to Passover.” Discovering the holiday and everything else that came with the Zhid designation on his passport came only after Ross and the rest of the Furman family immigrated to the United States. “As a whole, my Jewish roots started with the Lubavitch community through F.R.E.E.,” said Furman. Passover and its story of plagues, a miraculous escape and the birth of a nation were easier to swallow than the accepting the importance placed on having a brit milah, circumcision, he said. Furman, now a member of a young philanthropist committee headed by Michael Steinhardt and Edgar Bronfman, sees the fondness of Russian Jews for matzah as an outgrowth of old Soviet oppression. “Our spiritual lives were constrained so now we take advantage of the freedoms we have been given. In the same way, Russian Jews strive financially because now they have that freedom.”

Showing up to collect matzah brings Russian Jews in contact with Chabad’s other Passover activities. Last year, 250 Jews turned up for a Seder in Irkutsk, an outpost in Siberia’s eastern flank. In Moscow, 17 simultaneous community Seders brought Passover’s significance to thousands. Similar programs take place across Israel. The twenty-first edition of F.R.E.E.’s Russian language Haggadah, the Seder’s book of readings and ritual, is used by Russian Jewish communities in the U.S. and Canada. “My mother still uses the Passover guide we got when we first came to the States,” said Furman. The organization also runs a “Passover 101” class in Russian for those interested in understanding the details and reasons for the traditions.

In the United States where vast menus of matzah are available  – handmade, gluten free, whole wheat – Rabbi Zaltzman maintains that they don’t quite have the taste he remembers from Russia. Instead of buying matzah, he and his family rent a matzah bakery for a few hours to roll and bake their own matzahs, recapturing a hint of the self-sacrifice that flavored the matzahs behind the Iron Curtain.

Related Articles
View All
One Million-Plus Pounds of Matzah To Be Distributed in FSU
(FJC.ru) More than one million pounds of matzah and 150,000 bottles of wine are being distributed to Jewish communities of the fifteen republics. The matzah…
Holiday & Shabbos
Sweet and Sweeter
Rosh Hashanah, Yom Kippur, Sukkot, Simchat Torah . . . the holidays in the Hebrew month of Tishrei are chock-full of traditions uniquely symbolic of…
Holiday & Shabbos
Remembering Sinai, Reliving the Experience
A survey by Kelton Research found that less than six in ten Americans knew the sixth commandment, “Thou shalt not kill”
Holiday & Shabbos
Rabbi Dovid Olidort: Behind The Iron Curtain
These are the personal Shabbos stories of an eclectic group of influential personalities
Holiday & Shabbos
Tu B’Shevat: Where’s the Fruit?
This plant-based holiday takes place in the middle of winter. Considering that the fruits of the trees haven’t yet begun to grow, why celebrate the…
Get Inspiration to your inbox!
Newsletter
Join our weekly newsletter for inspiration and updates
Donate
Find Your Local Chabad Center
Subscribe
|
Log In
Chabad
About Chabad-Lubavitch
About Chabad Lubavitch
The Rebbe
Headquarters
Magazine
Magazine
News
News & Updates
In The Media
Impact
Social and Humanitarian
Social and Humanitarian
Education
Education
Community
Community