Defying Her Tormentors: A Survivor’s Legacy 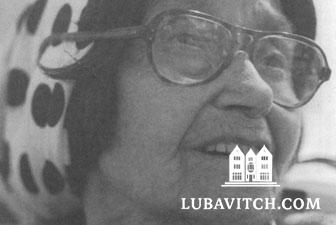 The passing yesterday, of 106-year old Maryasha Garelik was reported in news outlets internationally. Survivor of Czarist, Soviet and Nazi persecution, Maryasha was an exemplar of the Chasidic spirit, and leaves four generations of descendants, numbering over 700, many of whom are serving in leadership positions in Jewish communities worldwide. In Brazil, Australia, China, England, Canada, and in numerous cities in the United States, her grandchildren carry the torch of Chasidic devotion she kept aflame. The following is from a photo essay under the title, Keeper of the Flame,  published 12 years ago, in the Wellsprings journal.

Defiance marks her face with hundreds of little wrinkles, each etched into her skin by trials and tribulations of a saga that begins at the turn of the century. The shrunken, hunched figure of Rebbetzin Maryasha, which seems to Crown Heights residents almost a permanent fixture of the community, appears deceptively fragile. Beneath a frail exterior, Maryasha is a feisty woman, undiminished by brutal years of hunger and persecution.

Maryasha was five when her father was killed in pogrom. As a young mother of six, she watched her husband being led away from her kitchen table one sunny morning in 1937. His unknown fate would haunt her prayers and dreams as she fled communist authorities, raised her children, married them off, welcomed new generations into the world, and grew old. In 1987, the KGB files were opened and Maryasha finally had confirmation of her husband’s execution 50 years earlier.

We have come to visit and photograph Maryasha outside her home, on Eastern Parkway. She is in no hurry, and keeps us waiting while she reads from the siddur. Henya, her granddaughter, pleads with her to continue praying after the pictures. Reluctantly, she pauses long enough to allow Henya to wrap a shawl around her. But she insists on taking her siddur and her magnifying glass with her.

Maryasha tells us about one of her children who died at eight months. She recalls immersing herself in an icy river before becoming pregnant with him. Those inspirational stories about women going to profoundly painful lengths to preserve the mitzvah of mivkah, are not apocryphal after all. “The goyim used to wash their clothing there,” she explains, “and when the river froze, they’d break some ice so that they could get to the water under it.” Maryasha used that opening in the frozen river as a mikvah. Nine months later, she gave birth to a son. It was after waiting on a bread line with the baby that he developed scarlet fever and died.

Maryasha speaks only in Yiddish. So speaking in English, I ask Henya how old her grandmother is. The centenarian's riposte cuts the speculation: “My years belong to G-d alone.”

We talk a bit more and then Maryasha begins to sing an old Jewish melody, something about her father’s golden Kiddush cup. She eyes the photographer carefully. “Er is a Yid?” [Is he a Jew?] she asks Henya.

Henya responds affirmatively. “Vu is zein yarmulke?” [where is his yarmulke?] she demands. Someone goes into the house to find a yarmulke for Saul Lieberman, the photographer, who just rode the subway in from the East Village. Obligingly, he props it on his head. Maryasha then tells him a story—translated by Henya—about a young man who nearly strayed from the path when, suddenly, his fringes—his tzitzit, flew into his eye to remind him that he is a Jew. He too, should be wearing tzitzit, she advises.
The mitzvahs, she says with absolute conviction, “have the power to save a Jew.”

In both the bitter and the sweet, Maryasha discerns G-d’s providence. Her relationship with Him seems exquisitely personal and concrete. In the cruelest of times, she held on to G-d, and that, she says, is the reason for her personal triumph against Stalin: generations of descendants, all proudly identifying Chasidim.