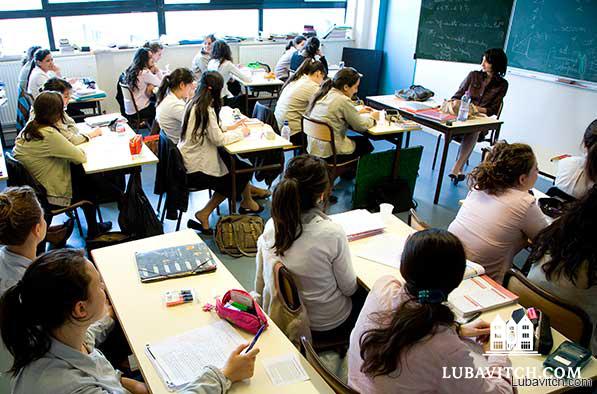 A class at the Beth Hanna High School in Paris, France. Below: The Beth Haya Mouchka school complex.

From his modest office in the magnificent 22 million dollar Beth Haya Mouchka school complex in central Paris, principal of the Beth Hanna High School, André Touboul, remains undistracted by the publicity and accolades the school has recently garnered. Ranking at the top of Le Parisien’s list of the nation’s schools earlier this year, the school also got recognition last week with the release of the results of the matriculation exam of French schools: Beth Hanna took the highest score, with the students scoring 100% on this year’s tests.

The real reward of these achievements, says Touboul, is that they prove that even an institution which, as a matter of principle, does not reject students who come to the school with poor academic performance, can provide students with the kind of education that gives them more than a fighting chance to succeed as adults: academics and Jewish values in an environment that demonstrates love and respect for students and teachers.

“We are celebrating that even the weaker students continued their education in the school and most of them had greater academic success than when they arrived at the school,” Touboul says. In contrast, a 2014 study by Insee, France’s national statistics agency, found that just over 70 percent of French adults have a high school diploma.

Parents and teachers praise Toubol for the school’s strong individual focus and rigorous academic standards. Skalli Cohen, whose daughter Anat, 18, graduated high school this year, says that teachers pay close attention to the strengths of each student, building on that to bolster them in those areas that demand more effort. Teachers, she explains, see it as their personal responsibility to provide students with the necessary reinforcement so that they make strides in those areas where they are weakest.

Herself a mathematics teacher, Cohen says that when she was looking for a school for her daughter, she heard about the good academics and the school’s diverse student body. She is particularly pleased with the way the school manages to blend good character values, a spirit of unity among its students, and high academic performance. This, she says, “has made Beth Hanna a model day school that other French Jewish schools are now trying to emulate.” 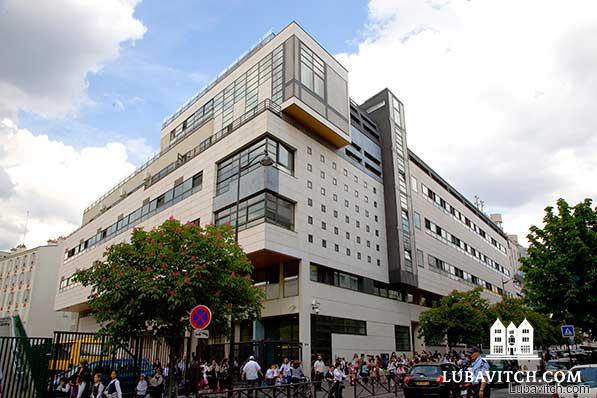 In their rating, the French daily, Le Parisien gave its highest rating to the school, based on several criteria: the students’ high marks on their government tests, the number of students from each grade who took the tests, dropout rate and class attendance rate.

As well, the Parisian Jewish weekly newspaper Actualite Juive gave high praise to the school for this year’s 100% success rate in the students’ matriculation exam. According to the newspaper, France’s high schools average is 78.8%, with many other Jewish schools receiving in the 90% range.

Today 1600 students attend the Chabad-Lubavitch school, the largest Jewish school in France, from preschool through high school. The school was founded by Rabbi Shmuel and Batya Azimov shortly after their arrival in the city to open the first Chabad House there in 1972. The school works closely with the many Chabad Houses in Paris and its suburbs, and has a large enrollment of students from those districts, as well as from the center of Paris.

Yael Lusky, who graduated from the school two years ago, confirms what the others say: that the unity in the school is what gives the school its success. “The classes are mixed with students from different backgrounds, and while at first it is difficult academically for all the students to stay on the same level,” she says that teachers encourage the students to work and assist each other in their studies.

“We all worked together and after a short while we all excelled, creating a strong atmosphere of unity in the classroom.”

Related Articles
View All
France: In Face of Anti-Semitism, Jews Deepen Identity
Friday's terror siege on a kosher supermarket in France, in which four people were killed, is the most recent of anti-Semitic violence that has targeted…
While Some Lament The Decline of French Jewry, A Jewish Community in France Blossoms
Few communities with 3500 Jewish families today have no Jewish community center. But this one in France’s 77th District, home to Euro-Disney, had not, until…
A Day School Grows in Brooklyn Heights
Opening a private school in 2015 is a risky business. As the most intensive form of Jewish education, a day school is also by far…
Founder of Mazel Day School To Receive Jewish Education Award
Mrs. Chani Okonov, a Chabad emissary to Brighton Beach and co-founder of the Mazel Day School, will receive the 3rd annual Jewish Education Project Young…
Nevada’s Jewish Day School Opens New Building
As schools across the country open their doors this September some 180 students of the Desert Torah Academy will be entering a brand new, state-of-the-art…
Lubavitch Girls School in London Receives Coveted VAS Status
The Ruth Lunzer Lubavitch Girls Primary School in the London borough of Hackney, recently received the coveted status of a Voluntary Aided School. The VAS…
A School, A Community, Grows with Chabad in Houston
The number of Jewish Day Schools in the U.S. has been on the rise for some time now.  The AVI CHAI Foundation’s census of Jewish…
Chabad School Second Time Winner of United States Blue Ribbon Award
Representatives of the Hebrew Academy in Huntington Beach were on hand, on Friday, October 31, in Washington, DC to receive the U.S. Blue Ribbon Award…
Education
Remembering Rebbetzin Chana: Jewish Feminine Role Model
A feminine role model of Jewish activism and proponent of Jewish scholarship, is being remembered today, on her yahrzeit.
Education
I Will Learn It on a Train, I Will Learn It in the Rain
What was once the province of an elite few is now available for free online in every language
Education
Vienna Springs into Action to Take In Ukrainian Students
The Lauder Chabad School in Vienna is going to extreme lengths to accommodate 700 Ukrainian refugee families—free of charge.
Education
110 Schoolchildren Show Off Jewish Knowledge at Championship Game Show
On March 13th, one hundred and ten Jewish schoolchildren marched into a Princeton, New Jersey ballroom for CKids’ annual JewQ International Torah Championship 5782 and…
Get Inspiration to your inbox!
Newsletter
Join our weekly newsletter for inspiration and updates
Donate
Find Your Local Chabad Center
Subscribe
|
Log In
Chabad
About Chabad-Lubavitch
About Chabad Lubavitch
The Rebbe
Headquarters
Magazine
Magazine
News
News & Updates
In The Media
Impact
Social and Humanitarian
Social and Humanitarian
Education
Education
Community
Community