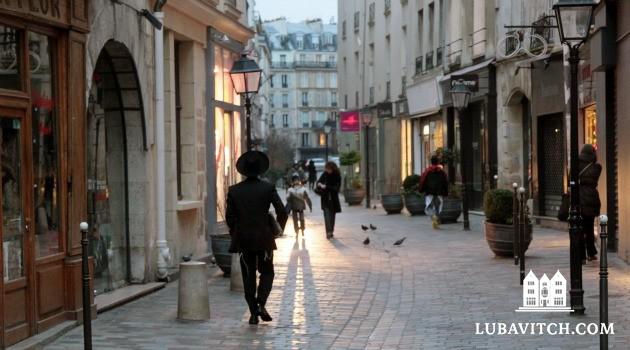 Editor’s Note: Friday’s terror siege on a kosher supermarket in France, in which four people were killed, is the most recent of anti-Semitic violence that has targeted the country’s Jews. The old scourge refuses to die, but this time around Jews refuse to hide. Instead of intimidation, anti-Semitism is eliciting defiance. Jews are declaring their identity with greater visibility on the streets and in social media. Following the attack on Friday, many who don’t usually, wore kippahs in the street and went to shul on Shabbat. And if once they cowered and hid their identity, they’ve now taken to twitter, declaring with pride, #je suis Juif” –I am Jewish.

The attack on a kosher supermarket in Paris as Jews were making their Shabbat purchases, may well prove to be the tipping point; larger numbers yet, of Jews with deep roots in France will leave the country, refusing to remain in a place that has become so inhospitable to them.

In July, Muslim protestors attempted to storm two synagogues in Paris. With a substantial Muslim population, far-right National Front party, and widespread anti-Israel sentiment among French leftists, France is seeing many Jews emigrate. But others are digging their heels in, deepening their Jewish identity. With the largest Jewish population in the EU, many of France’s Jews will remain.

But this time, they will not cower. If anything, recent anti-Semitism has provoked Jews to affirm and augment their Jewish identity. Many already have, and many more will likely pull their children out of public schools and enroll them in Jewish schools. And many more will gravitate to the Jewish community, taking strength in their unity. In this repost from July, lubavitch.com takes a closer look at how Jews are responding.

After switching her children from a public school where they were subjected to anti-Semitic abuse, to a Chabad Jewish school, Sarah Fitoussi, a mother of three living on the outskirts of Paris, said she felt “like we went from hell to heaven.”

The move, she said, brought her relief and peace of mind. “The school didn’t just save our kids, they saved our entire family.”

According to a 2012 report by the Service de Protection de la Communauté Juive (SPCJ), the local Jewish Community Security Service, 2012 saw an 84 percent increase in physical and/or verbal public attacks on Jews—up from 171 in 2011 to 315 cases in 2012. The number of Jews who left France for Israel in the first quarter of 2014 almost quadrupled as compared to the same period in 2013, according to figures released this May by the Jewish Agency.

In a symposium this past December at the EU Parliament, Roger Cukierman, president of the CRIF (Conseil Représentatif des Institutions Juives de France), an umbrella group of French Jewish communities, explained that France’s Jewish community – Europe’s largest at around 500,000 – faces a trio of challenges: an increasingly radicalized Muslim immigrant population, growing popularity of the far-right National Front party, and widespread anti-Israel sentiment among French leftists.

“It’s not so pleasant living there as Jews in this period,” Cukierman said, pointing to startling statistics that show forty percent of violent hate crimes in France target Jews.

Despite these dire figures, the majority of France’s Jewish population are staying put and with them, Chabad Shluchim—some 400—serving Jewish communities in all of France, from Perpignan to Lille. In many of these areas, Chabad has doubled down its activities, making Jewish schools more accessible and available to families who cannot afford private school tuition. Like Mrs. Fitoussi, many have taken their inspiration from Chabad’s assertive presence and have subsequently decided to become more actively involved in Jewish communal life.

A Jewish School for All

There are 27 Chabad day schools in France, the first established nearly 70 years ago by the Lubavitcher Rebbe. Many of these schools are mobilizing to increase security. École Chneor, a Jewish school in Aubervilliers, has started a campaign called École Juive Pour Tous (“A Jewish School for All”), to make Jewish schooling available to as many Jewish students as possible.

Mrs. Miriam Kalmenson, an administrator at the school, explains that Aubervilliers, a northern suburb of Paris, is home to a large Muslim immigrant community from North Africa and parts of the Middle East.

“The neighborhood is definitely not friendly to Jews,” said Kalmenson. “We have had students who were in public schools and had to hide the fact that they were Jewish for fear of getting beat up. Parents have told me how they would wait by their windows at home to see if their children would come home safely, without cuts and bruises. They suffered through it because they didn’t have the money to pay for a private school or because the Jewish school was too far from home.”

Rabbi Chalom Gurewitz, principal of Ecole Beth Menachem in Lyon-Villeurbanne, with some 520 students, observed that fear is constant among Jewish community members. “Everyone is worried. Whether you are walking the street in a residential neighborhood, or riding the subway by yourself—you never know what is going to happen.” The rabbi noted that the school has enhanced security measures by installing more cameras and safeguards. At the same time, there’s also been more interest in Jewish engagement. More parents, he says, are expressing an interest in giving their children a Jewish education.

With this same goal in mind, Kalmenson and fellow administrators at Chneor have offered generous scholarships.

“We will accept any Jewish child to our school, regardless of his or her parents’ ability to pay,” Kalmenson said. “Finances should not be a deterrent to a Jewish education. Neither should location—we have added 7 new bus lines in the past year to transport children from around the city, no matter how off route it is.”

So far, the program has been a success. During the 2013-2014 academic year 150 new students joined Chneor from surrounding public schools and Catholic private schools, bringing Chneor’s student population to over 500 students. With the swelling number of new students, the school has had to move to a larger facility. More importantly, school faculty found itself working to help students from very diverse backgrounds acclimate to a Jewish school environment.

For Chneor’s staff, the importance of the mission helps them meet the challenges. “The children who come here from public schools recount shocking stories,” says Kalmenson. “Parents constantly tell us they how fortunate they feel to know their children are now safe from bullying, and are happy and smiling.”

Ten-year-old Chai Bensimon says switching schools has proven to be a life-change for him. “It feels great to have Jewish friends. When I wake up in the morning, I want to go to school.”

In some cities, anti-Semitism seems to be less threatening. At Kerem Menachem Habad in Nice, student population has grown steadily over the past few years to 260 students in 2014. With parallel boys and girls classes through junior high school, Kerem Menachem serves a large segment of Nice and the surrounding area’s Jewish population. The school’s reputation as a place of academic excellence is what attracted most parents.

Mrs. Sara Pinson, principal of the Hebrew department, founded the school in 1979 with her husband.

“When we first opened a school here, people thought it was a very strange idea,” she said. ‘”Parents worried about sending their children to a school that they thought was not on par. But we have proved ourselves both in our Judaic program and our government accredited secular studies.”

The school has grown in recent years. “With the large number of immigrants joining public schools, the rigor of these institutions has gone down,” Pinson states. “In comparison, our school has been rated academically one of the top private schools in the city. Our dual curriculum of Judaic and secular studies is a highly competitive option for parents looking to give their child a solid education.”

Like its counterpart in Aubervilliers, Kerem Menachem established a “no child left behind” program that will not reject a Jewish student because of lack of funds.

Marjorie Baram is a mother of two living in Nice with her husband, Amar. She does not consider herself religious, but two years ago, when looking for a school for her now 5-year-old daughter Lea, she chose Chabad.

“Our Jewish tradition is very important to me,” says Baram. ““The fact that Lea knows the Jewish holidays, knows the songs for Pesach, it makes me so proud. The importance of transmitting our Jewish legacy was the root of my decision to send her to this school.”

Baram’s daughter never attended a public school, so she does not know if anti-Semitism is a factor locally. “I don’t really feel any anti-Semitism here in my normal life.”

Her choice of a Jewish school for her daughter, she explained, “was not to avoid the negative in the public schools, but to benefit from the many the positive things that are in the Jewish school.”

Most parents, said Pinson, reflect a similar sentiment, and while she’s aware of the problem Jews are facing in other cities, she hasn’t noticed a corollary between anti-Semitism and growing enrollment in her school.

For some, the change is prompted by fear of anti-Semitism; for others, it is in spite of anti-Semitism. Either way, Chabad leaders are noticing a growing desire among France’s Jews to strengthen their identity, and for many, like Shirel Meimoun, a high school student, the decision to move to a Jewish school is something to celebrate.

“I finally found a place where I fit in. School now feels like a warm home,” she told lubavitch.com.

Related Articles
View All
A Teacher in Paris: Rabbi Shmuel Azimov
Emissary of the Rebbe to Paris since 1968, Rabbi Shmuel Azimov, who passed away Wednesday, November 5, 2014, was credited by many for the sweeping…
STATEMENT BY CHABAD-LUBAVITCH HEADQUARTERS
Prime Minister Valls was right in acknowledging that France will be judged a failure if its Jews are forced to flee. We urge Paris’s city…
France
France’s Ministry of Youth Recognizes Chabad CTeen Program
Teens help seniors struggling to secure Covid vaccine
France
Despite Emigration, A Jewish Center Opens in France
The rise of anti-Semitism in France has been driving many Jews from the country. Most leave for Israel. Others are fleeing the bigger cities and…
France
Jews of France Cautiously Optimistic After President’s Remarks
While reaffirming France’s secular character, the President acknowledged the need to ensure that Laïcité does not infringe of the freedom of religious expression.
Get Inspiration to your inbox!
Newsletter
Join our weekly newsletter for inspiration and updates
Donate
Find Your Local Chabad Center
Subscribe
|
Log In
Chabad
About Chabad-Lubavitch
About Chabad Lubavitch
The Rebbe
Headquarters
Magazine
Magazine
News
News & Updates
In The Media
Impact
Social and Humanitarian
Social and Humanitarian
Education
Education
Community
Community