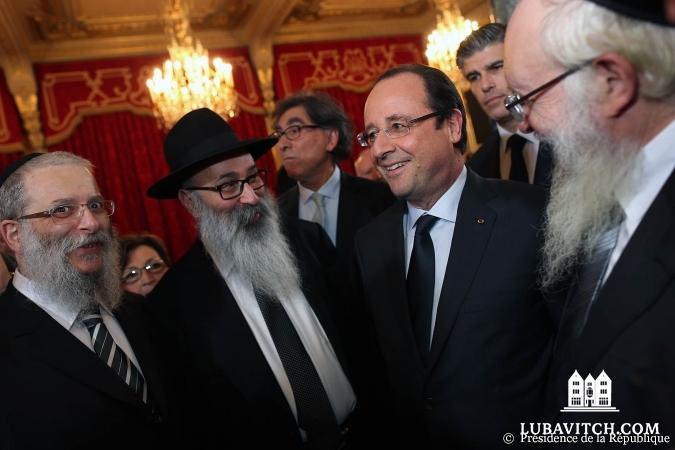 In his remarks at the 70th anniversary of CRIF, the representative council of French Jewish institutions, President Francois Hollande spoke to his vision of a French Republic more friendly to Jews and religious expression.

Several hundred representatives of French Jewry were invited to the event hosted earlier this week by Hollande at the Élysée Palace, the official residence of the President.

While reaffirming France’s secular character, the President acknowledged the need to ensure that Laïcité—the Republic’s idea of separation of church and state—does not infringe of the freedom of religious expression. Often criticized as a disguised form of anti-clericalism, Laïcité is different from the American notion of separation of church and state. The policy insists that religious expression is a matter of private life and should not be manifest in the public sphere, thus contributing to a culture intolerant of observant Jews.

That, and with the sharp rise in anti-semitism and violence against Jews, many have left for Israel and elsewhere. Its numbers now diminished, France still has the largest Jewish population in Europe with an estimated 480,000 Jews.

Rabbi Chaim Nissenbaum, the spokesperson for Chabad-Loubavitch in Paris and a board member of CRIF, was among guests invited by President Hollande. The President’s warmth towards France’s Jews and towards Israel, Nissenbaum told lubavitch.com, was, he hoped, a sign of a positive shift in France’s Jewish future.

Recalling some horrific acts of violence against his country’s Jews, the President said: “The Attorney General, the Minister of the Interior are fully mobilized. Anti-Semitism is not limited to the Jewish community, it is the responsibility of all the people of France.” He recalled the murder of 24 year-old Ilan Halimi in 2006, and of the teacher and three young children at the Otzar HaTorah school in Toulouse, in 2012.

Rabbi Yosef Matusof, Chabad representative of Toulouse, spoke with lubavitch.com after the CRIF reception. Since the terror in Toulouse, the government, he said, “has invested in security measures to ensure the safety of children at the Jewish schools here, and at our Chabad center.”

Matusof, who met with President Hollande several times following the 20012 tragic terror attack, said the President has reached out to the Toulouse Jewish community of 15,000, especially to its children, visiting on various occasions.

Several months after the murders, in a session closed to the media, President Hollande spoke to the still traumatized students at the  school. “The students expressed fear, and a concern that perhaps they should leave France,” Matusof recalled. “The President told them that he seconds my own words: running away is a triumph for anti-Semitism.”

The resurgence of anti-Semitism in Europe has many arguing that Jews should leave for friendlier destinations. But while expat communities of French Jews are growing in Israel and elsewhere, no one expects a mass exodus from France. In Paris and its surrounding areas more than 40 Chabad centers serve Jews hubs; Shluchim take the position that leaving the country would be a triumph for anti-Semitic intimidation.

“We need to stem anti-Semitism, not reward it,” Rabbi Matusof said.

Like Rabbi Nissenbaum, he also noted the President’s embrace of Jews, his support of Israel, and his pronounced interest in ensuring the security of Jews and Jewish life in France.

In his closing remarks, President Hollande said, “France needs all its citizens and the Jews of France in particular.”

Related Articles
View All
France
France’s Ministry of Youth Recognizes Chabad CTeen Program
Teens help seniors struggling to secure Covid vaccine
France
Despite Emigration, A Jewish Center Opens in France
The rise of anti-Semitism in France has been driving many Jews from the country. Most leave for Israel. Others are fleeing the bigger cities and…
France
France: In Face of Anti-Semitism, Jews Deepen Identity
Friday's terror siege on a kosher supermarket in France, in which four people were killed, is the most recent of anti-Semitic violence that has targeted…
Get Inspiration to your inbox!
Newsletter
Join our weekly newsletter for inspiration and updates
Donate
Find Your Local Chabad Center
Subscribe
|
Log In
Chabad
About Chabad-Lubavitch
About Chabad Lubavitch
The Rebbe
Headquarters
Magazine
Magazine
News
News & Updates
In The Media
Impact
Social and Humanitarian
Social and Humanitarian
Education
Education
Community
Community