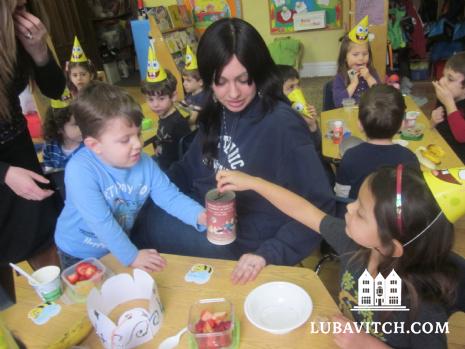 Children at the Brooklyn Heights Chabad’s preschool do acts of kindness.

When the Brooklyn Heights Jewish Academy on Atlantic Avenue opens this fall with its first kindergarten class, the vision nursed by Rabbi Aaron and Shternie Raskin over 23 years, will finally take shape.

Aliza Surut, a local parent whose five-year-old son has attended the Brooklyn Heights Kiddie Korner preschool for the last several years, is thrilled with the prospects the new school will offer her son. “I am expecting this school to continue teaching with the same methods that they do at the Kiddie Korner.” Her son, Ori, she says, “will learn about Judaism and all of the same values we appreciate now. But there will also be good academics and the school will one day help him get into a good college.”

A college education is still many years off from what Rabbi Raskin hopes will be his first 15-student class, but, with the addition of a new class each year, he anticipates the school will grow with the children and their families. “We saw this as an opportunity to fill a need by offering something that no one else was offering.”

In 1992, when the Raskins opened Kiddie Korner, there was nothing of its kind in Brooklyn Heights. Two decades ago, this historic neighborhood was largely populated by older families, set in their ways. It took a long time, says Shternie, director of Chabad’s Kiddie Korner, to earn the credibility that it enjoys today. She recalls that the school, which now has 130 children and a waiting list, began with two children, and grew from there by word of mouth.

Once they graduate from Kiddie Korner, the children either move on to public school or to other private schools in the area. But these don’t offer the educational experience so unique to Chabad, explains Rabbi Raskin, who bided his time waiting until the area’s demographic turned younger and more affluent. With parents taking a proactive role in their children’s education, the time was ripe to move ahead with the opening of BHJA.

Dr. Ethan Ehrenberg, a children’s clinical psychologist, serves on the newly formed school board and is helping to inform its curriculum. A follower of American psychologist Martin Seligman, Ehrenberg speaks of three aspects that make up a healthy worldview: kindness, gratitude and capacity to love.

“I think these three aspects correlate very neatly to our three Jewish pillars: Torah, prayer and loving kindness,” says Ehrenberg, noting that absorbing these messages as reflected in Chabad’s philosophy at a young age, can impact an entire generation of children.

Incoming principal Faige Spritzer is developing a curriculum in consultation with Ehrenberg. Academics will go hand-in-hand with building positive character traits, she insists. “We want to help shape children with strong ideals, not just knowledgeable ones.” The school will work with an individualized program that allows each child to explore and grow in a sound, optimal environment, while forming a rich Jewish identity.

Opening a private school in 2015 is a risky business. As the most intensive form of Jewish education, a day school is also by far the most expensive vehicle for delivering such an education. And although reports that the economic downturn that caused many private and Jewish day schools to shutter their doors over the last decade is now subsiding, tuition typically accounts for only 70-80 percent of the school’s operating budget.

The shortfall, says Rabbi Raskin, will come from local donors and supporters. Brooklyn Heights parents are accustomed to paying for private school, and as with the preschool which has become so popular, he expects the new school’s reputation to grow similarly, making it a desirable option for parents. Scholarships will be made available based on need.

A survey by The Partnership for Excellence in Jewish Education (PEJE) found that parents generally select a Jewish day school because it promotes their children’s Jewish identity; they feel it will academically prepare students for high school and/or college and, because they feel the school is responsive to parent concerns.

Surut, who has become active recruiting for the school, says she is confident it will exceed her expectations in meeting these needs. She sent her older daughters to public school and admits that she has been disappointed. They don’t have the love of Judaism her five-year-old son has developed through Kiddie Korner. She cites the values of helping others, giving charity, visiting the sick, and celebrating Jewish holidays by sharing with friends as “a way of life you cannot get anywhere else.

“Bringing up a Jewish child is not something you can do in public school or even Hebrew school,” says Surut. “I sent my daughters to public school. Now I regret it.”

Related Articles
View All
Nevada’s Jewish Day School Opens New Building
As schools across the country open their doors this September some 180 students of the Desert Torah Academy will be entering a brand new, state-of-the-art…
New Building for Growing Moscow School
Hundreds turned out last week to mark the dedication of a new building for Moscow’s Cheder Menachem Jewish day school. Standing near the Marina Roscha…
Seattle Jewish Day School Secures $3.5 Million Property
A Jewish day school near the University of Washington has left the Chabad center it has called home for the last 35 years, for a…
A School, A Community, Grows with Chabad in Houston
The number of Jewish Day Schools in the U.S. has been on the rise for some time now.  The AVI CHAI Foundation’s census of Jewish…
Education
I Will Learn It on a Train, I Will Learn It in the Rain
What was once the province of an elite few is now available for free online in every language
Education
Vienna Springs into Action to Take In Ukrainian Students
The Lauder Chabad School in Vienna is going to extreme lengths to accommodate 700 Ukrainian refugee families—free of charge.
Education
110 Schoolchildren Show Off Jewish Knowledge at Championship Game Show
On March 13th, one hundred and ten Jewish schoolchildren marched into a Princeton, New Jersey ballroom for CKids’ annual JewQ International Torah Championship 5782 and…
Education
Tuesdays With Steve
Berger’s pomegranate trees are so verdant that every student picks his own glossy red fruit to bring home each Rosh Hashanah
Get Inspiration to your inbox!
Newsletter
Join our weekly newsletter for inspiration and updates
Donate
Find Your Local Chabad Center
Subscribe
|
Log In
Chabad
About Chabad-Lubavitch
About Chabad Lubavitch
The Rebbe
Headquarters
Magazine
Magazine
News
News & Updates
In The Media
Impact
Social and Humanitarian
Social and Humanitarian
Education
Education
Community
Community