A School, A Community, Grows with Chabad in Houston 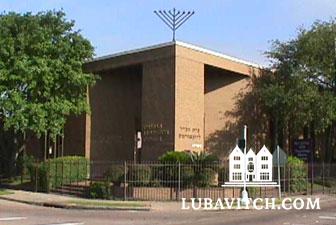 Torah Day School of Houston (TDS), the school of the Chabad Lubavitch Center—Texas Regional Headquarters, was one of the trail-blazers.  Having opened its doors in 1977, TDS is celebrating its 30th anniversary this year.

Mrs. Chiena Lazaroff, Director and Judaic Principal, and her husband, Rabbi Shimon Lazaroff, Head of School, founded TDS.  At the time, they had “a little apartment Chabad House” and were in the process of building a shul.  Their children were attending a local Jewish school, as were the children of Carol and Stuart Nelkin, a couple who were becoming observant with them.  Since both families were unhappy with that school, they teamed up to open a new Day School.

The Nelkins financed the project.  The Lazaroffs taught Judaic studies and hired secular teachers to teach secular subjects.  “It was like a one-room schoolhouse,” says Mrs. Lazaroff, “with five of our children and two of theirs.  We were in a little trailer.  A year later we were in a new building.  It turned out to be the foundation of our community.”

Today, 120 students, 30 in the pre-school and 90 from kindergarten through eighth are at TDS.  More than 800 children have passed through its doors since its humble beginnings. The younger classes are co-ed.  From 5th to 8th grade, classes in Judaic studies are separate for boys and girls, while for secular subjects some are separate and some co-ed.

Being involved with Torah Day School brought powerful change to her family, Carol Nelkin admits.  “Before that I was not able to give my kids the kind of Jewish education that we came to know and want for our kids. Before we met Rabbi and Mrs. Lazaroff and became familiar with Chabad, we were like a lot of other American Jewish families on our way to getting totally lost.”

Carol and her husband grew up in Conservative synagogues, but their family became Orthodox through their relationship with the Lazaroffs.

Presently, TDS  is under renovation to enlarge it to twice its original size.  “The school has been in a very cramped situation that has reached its capacity,” says Rabbi Chaim Lazaroff, Mrs. Lazaroff’s son.  Rabbi Chaim and his wife Chanie run the Center’s Hebrew School.

The expansion will add eight new classrooms, Judaic and general libraries, dedicated computer and science labs, a new assembly hall, a teachers’ resource room, and a sheltered rooftop playground.  A new early childhood program for 18-month-old toddlers is part of the plan.  The modernized building double its capacity to allow comfortably for 280-students.

Challenges Then and Now

In the beginning, “Our challenges were getting people to support us and getting children to join our school, because we were the new kid on the block,” Mrs. Lazaroff recalls.  An Israeli woman with a two-year-old asked Rabbi Lazaroff if he would start a pre-school class for the child.  He said yes, if she would find six children, and she did.  The Lazaroffs hired an early childhood professional and that got the ball rolling.

TDS was the first Jewish pre-school in Houston that accepted two-year-olds, says Mrs. Lazaroff.  The other schools began at three, giving TDS an advantage.  The other Jewish schools later followed suit.

Mrs. Lazaroff believes that people in the neighborhood who were not observant were afraid to enroll their children in a Day School.  These parents weren’t interested in a strong Jewish education, but they were not concerned about their kids learning a bit of Hebrew at the pre-school level.

At that time, most students left after pre-school.  Those who stayed were the children of mothers who participated in adult Torah classes offered by the Lazaroffs, and could appreciate the education their children were getting.

In the early years, parents were afraid to keep their children in the school at higher grade levels.  They didn’t keep kosher at home, so they wondered how their children would feel in a school run by kosher, religious people.  If his friends wouldn’t eat in their home, how would he have friends over?  Would the child be told that his family was bad?

Americans don’t want to be separated from their friends; they tend to enroll their children in the school where their social group goes, says Mrs. Lazaroff, but over time, parents realized their concerns were unfounded.

Today, children at TDS have an active social life, with  after-school enrichment programs offered by the school, such as Tai Kwon Do, a basketball team, art, and a girls’ organization run by students.

To Have a Jewish Identity

TDS, explains Rabbi Lazaroff, “inspires people to become more religiously connected to Yiddishkeit, to Judaism, to Torah, to have a Jewish identity.” Many of the families now keep the highest standards of kosher. The trend is such that even the Reform school now offers strictly kosher (chalav yisrael) pizza.  TDS participates in Jewish Federation meetings and lunches and “everyone feels more united because we can all eat together,” says Chienna.

“Our graduates teach in the Hebrew Schools of the community:  Reform, Conservative, Modern Orthodox, as well as in the Chabad Hebrew Schools.  Our students are visible with their yarmulkes and tzizis, and this has instilled Jewish pride in the overall community.”
A 2007 study funded by Partnership for Excellence in Jewish Education (PEJE) and conducted by Brandeis University, finds that “Former Day School students express a stronger sense of responsibility towards addressing the needs of the larger society by influencing social values, helping those in need, volunteering their time to social change efforts, and finding careers that allow them to be of service to the larger community as compared with their public and private school peers.”

The children of Carol and Stuart Nelkin are no exceptions.  Their TDS educations led to professional careers:  Jay is a lawyer; Dov—who has a doctorate in Jewish Ethics—teaches at Rutgers; and Sarah Nelkin Schreiber works with the American Jewish Joint Distribution Committee, a world-wide charity.  All of their eight children who are school-age attend Jewish Day Schools.

Mrs. Lazaroff attributes TDS’s success to the faculty’s focus on the positive.  Teachers talk about the joy of Shabbos and Jewish life, and teach good character traits.

“It’s not what you’re not permitted to do,” she says. “It's what kind of person you want to be.”