While Some Lament The Decline of French Jewry, A Jewish Community in France Blossoms 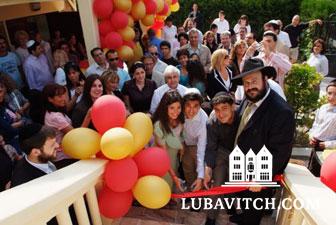 At the ribbon-cutting of the new Chabad Jewish Community Center in Pontault-Combault.

Few communities with 3500 Jewish families today have no Jewish community center. But this one in France’s 77th District, home to Euro-Disney, had not, until recently, a single hub of Jewish community life.

French Jewry may be atypical among the rest of Diaspora Jewry, and lately, some Jewish leaders have been expressing concern. In an interview with an Israeli paper last week, Dr. Joel Mergui, president of the umbrella organization of Paris’s Jewish community, spoke of his fear that the between the recent increase in aliyah by French Jews and the high rate of assimilation, “fewer people are passing through our synagogues in Paris and fewer use the community services.”

So the news that a newly dedicated building—a Chabad Center—in Pontault-Combault will formally open for Rosh Hashana services is a bright spot in the pessimistic forecasts of French Jewish life. It's all the more remarkable considering the fact that the 7,000 square foot renovated building is the result of a collective effort by community members who admit that only a few years ago, a relationship with Judaism was decidedly not a point of interest in their lives.

“People didn’t move here from Paris because they were looking for a vibrant Jewish lifestyle,” says Rabbi Amar matter-of-factly.

Of the eight existing denominational synagogues in the area, he says, only one–70 kilometers away–is open daily.

NO DESIRE TO CONNECT

"People felt no desire to attend synagogue with any regularity or any real commitment," he explains, and there was certainly nothing going on in the area to change people's attitude towards their Jewish identity.

In fact, it might be true that many if not most of the Jewish families who live in this highly assimilated area 35 kilometers outside of Paris, could not have been more disinterested in Judaism.

But Rabbi Shmuel Azimov, Chabad’s senior Shliach to France, knew enough not to be deterred, and five years ago he recruited Rabbi Yossi and Tzalcha Amar to Pontault-Combault, an area that attracted many after Euro-Disney opened nearby in 1995.

The Amars knew it would take much more than a first meeting with the area's Jews for any perceptible change to happen. The bearded, black-hatted Chasidic rabbi appeared to them more an apparition from a best forgotten past, than an opportunity to grow, and, as one community member admits, “many of us did not want to have anything to do with him.”

But today, Eric Bitan, a local businessman, is frustrated as he speaks to Lubavitch.com. Nothing he can say, he insists, “really explains how Rabbi Amar has changed my life, and not just my life,” he emphasizes in his thick French accent.

“Rabbi Amar has had a huge effect on so many people, you cannot imagine what an impact he's had here."

Eric credits Rabbi Amar with transforming a disaffected, assimilated segment of the Jewish population to one that is now actively involved in the vibrant Jewish life that has developed here. Where only a short time ago, people were basically indifferent to Jewish life, today, so many, like himself and his family, says Bitan, are participating in Shabbat, Torah study, Jewish life cycle events, with a desire to wear their Jewish identity proudly.

The challenge to the Amars is compounded by the physical layout of Seine-et-Marne, a broad swath in which 35000 Jewish families are spread out within a larger population over 576 counties. But Rabbi Amar has devised his own strategy where he visits 70 Jewish communities every month, one Jew at a time.

His determination and persistence were rewarded, and in the short span of five years, Chabad has contact with 900 Jewish families in the area and has recently recruited another young couple, Rabbi Sholom and Mirel Eidelman, to develop their growing youth activities division.

From the small space of their home which until now has doubled as a Chabad House, the Amars have steadily built up community participation, renting halls for large turnout events like Rosh Hashana and Yom Kippur services, and now, exclaims Eric Bitam who made first use of the new Chabad center with the celebration of his son’s bar-mitzvah, “You should see our Chabad House.”

NON JUDGMENTAL ACCEPTANCE OF EVERY INDIVIDUAL

Asked how he persisted in the face of a poorly promising welcome, Rabbi Amar tells of a lesson he learned at the Chabad-Lubavitch International Conference, when Minnesota’s former U.S. State Senator Rudy Boschwitz spoke there several years ago.

As Boschwitz told it, he was at the time, newly exposed to Judaism by his Chabad representative, Rabbi Moshe Feller.

One Sunday morning he stopped at his favorite burger joint for “the best cheeseburger to be had anywhere in the town.” As he was about to bite into it, he realized that some of the matzah that Rabbi Feller had given him was in his pocket, reminding him that it was Passover, a time when eating leavened bread of any kind, is prohibited.

“I took the cheeseburger out of the bun, and put it in between the matzah pieces that Rabbi Feller had given me,” said Mr. Boschwitz.

Later, the Senator’s regret at having eaten the cheeseburger began to gnaw at him. When he next saw Rabbi Feller, he told him what he did, and waited for his rabbi’s rebuke.

“I think the Rebbe would be very proud that you were careful not to eat the bread,” Rabbi Feller told Senator Boschwitz.

That, says Rabbi Amar, became the litmus test for him in his work as a Chabad Shliach.

“Jewish people who are not involved often feel that they will be judged by the rabbi, and that they are somehow not good enough. But Chabad believes that every Jew is an indispensable part of the whole. We have to act on that conviction.”

Rabbi Amar’s genuinely non-judgmental acceptance has succeeded in disarming even the most resistant Jews he’s met, and has helped them discover their own inspiration to participate in Jewish life.

“With a lot of hard work, and a determination to work patiently and positively with every Jew, they do open up to yiddishkeit, and are then grateful that they did.”

“I am 45 years old,” he says in an introspective moment.

“And until Rabbi Amar came along, I’ve never had a Rabbi.”