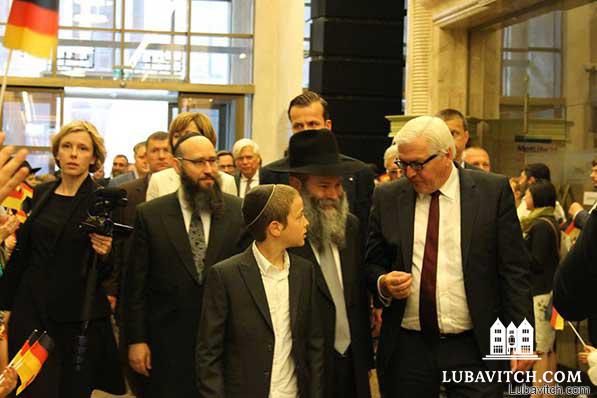 The German Minister met hundreds of community members who were in the synagogue for Shabbat prayers. In a subsequent closed-door meeting, he discussed the escalation of war in Ukraine with Chabad representatives.

A statement released by the center said that the details of the meeting were confidential, but that it was “successful.”

“The Jewish community of Dnepropetrovsk has become a symbol of democracy and a sign of why Ukraine needs the help and support of the entire free world to continue with the democratic process.”

Related Articles
View All
After Firebomb Ukraine Synagogue Sees Growth
Since the fire-bomb attack, the community decided to conduct more of its events than is usual, on its premises, raising awareness of and pride in…
Chabad Representatives in Ukraine Stay Put, Appeal for Help
Chabad Shluchim state-wide are struggling to meet the growing demand on their respective programs and services while funding from local business people has dropped by…
Teenagers Make Their Own Charity Boxes for Ukraine’s Needy
Teenagers in Fairfax, Virginia, created charity boxes that, once filled, will go to the needy in Ukraine. A part of the CTeen program at Chabad…
Ukraine: Construction Begins On World’s Largest Jewish Community Center
(lubavitch.com) Straddling two blocks, a $60 million, 400,000 square foot Jewish Community Center and Holocaust Museum now under construction in Dnepropetrovsk will be a city…
News Briefs
Walnut Creek Welcomes New Shluchim
Community Welcomes Shluchim With Flowers And Gifts
News Briefs
Statement By Chabad Lubavitch World Headquarters
Every day that Jews are barred from entering the synagogue by armed guards is an unforgivable violation of the Jewish people!
News Briefs
IL Governor Rauner Joins Chabad Emissaries in Prayer at Western Wall
Illinois Governor Bruce Rauner was joined by Rabbi Avraham Kagan of Lubavitch Chabad of Illinois on a visit to the Western Wall in Jerusalem Tuesday…
News Briefs
Kathmandu Emissary Organizes Rescue on Yom Kippur
It was the night of Yom Kippur, and Rabbi Chezky Lifshitz was not in shul.
Get Inspiration to your inbox!
Newsletter
Join our weekly newsletter for inspiration and updates
Donate
Find Your Local Chabad Center
Subscribe
|
Log In
Chabad
About Chabad-Lubavitch
About Chabad Lubavitch
The Rebbe
Headquarters
Magazine
Magazine
News
News & Updates
In The Media
Impact
Social and Humanitarian
Social and Humanitarian
Education
Education
Community
Community