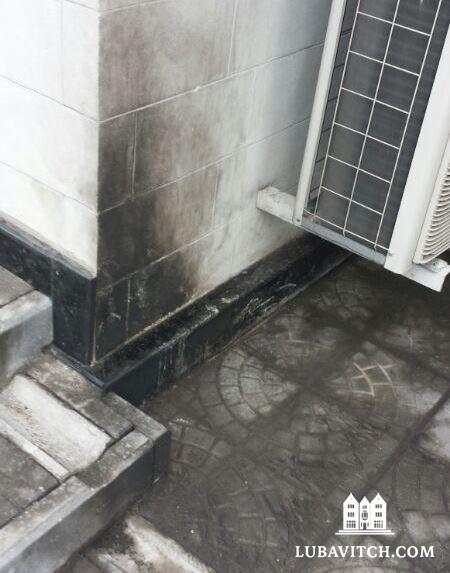 The community center in Zaparozhye after hooligans threw molotov cocktails at its windows.

Although riots and protests have given way Monday to some measure of calm in Kiev, the tension felt by Jews Ukraine-wide has not abated. Many of those who could, fled, but the majority—who do not have the means to leave—are sitting tight, waiting out a period of unnerving uncertainty.

“Jews are not a factor in the politics here, but whenever there’s chaos, Jews become a target and feel vulnerable,” said Rabbi Mayer Stambler, a Chabad representative in Dnepropetrovsk. With most of the protests going on in Kiev, things have been relatively calm in his city but the sense of anarchy struck closer to home for other Chabad representatives.

In Zaparozhye, for example—Ukraine’s sixth largest city, several hooligans threw firebombs at the community’s synagogue Sunday night. The thugs fled before security guards managed to pursue them, but the incident was captured on the synagogue’s security cameras. “We have guards at the building round the clock,” said Rabbi Nachum Ehrentreu, Chabad representative to Zaparozhye, “and thankfully, this happened after we had finished all of our evening classes and programs so no one was hurt.”

Ehrentreu points out that the perpetrators were stragglers who had joined a major protest by some 2000 opposition supporters earlier in the day. But he insists that “the protestors were not here to target Jews; in fact in the four years that the opposition was in power (2006-2010) it maintained good relations with the Jewish community. These were a few individuals looking to make trouble.”

ABANDONING LOCAL JEWS NOT AN ANSWER

Chabad representatives—there are roughly 70 couples serving Jewish life Ukraine, which has an estimated Jewish population of 300,000—are not leaving. In interviews with lubavitch.com, they echoed similar attitudes, saying that their role is to serve the Jewish people there and would not consider abandoning them. “We have nurtured deep bonds with Jewish people here. How can we leave them?” said Rabbi Stambler.

But according to Rabbi Mordechai Levenharts, a Chabad representative to Kiev, that doesn’t mean that he won’t encourage local Jews to make Aliyah. Unrelated to the recent turmoil, he said, “trying to live an observant Jewish lifestyle here is not easy, and if someone has grown in his or her Jewish observance and now wants to live in an environment that is more supportive of Jewish life, of course I encourage them to move to Israel.”

In the four years since Viktor Yanukovych became president, Ukraine’s economy has fallen apart and is now on the verge of bankruptcy, leaving a population angry at the financial abuses by government officials while so many lost their businesses. Chabad representatives say that support by local business people had dropped by more than half since the crisis, but the demand on their respective programs and services has increased sharply, making for a very difficult dynamic.

“We’ve seen so many local Jewish supporters who simply lost their businesses, and others left because the situation worsened,” said Rabbi Levenharts, pointing to his colleagues in some of outlying towns where things are even more difficult than they are in Kiev. Nikolaev’s Chabad representative, Rabbi Sholom Gottleib, said that he and his colleagues are appealing to Jews abroad to help the Jewish people of Ukraine during this critical time.

“Hundreds of thousands of Jews in Ukraine are turning to us to help them during this critical time, when they are increasingly depending on our soup kitchens, preschools and day schools, orphanages and all of our social, humanitarian and educational programs. We are working to bolster Jewish confidence, but we need help to increase security and to respond to the material needs of Jews who are now turning to us for more help and in larger numbers.”

Earmarked contributions made here will be processed by the Jewish community account of Kremenchug, and disbursed through the offices of the Federation of Jewish Communities.