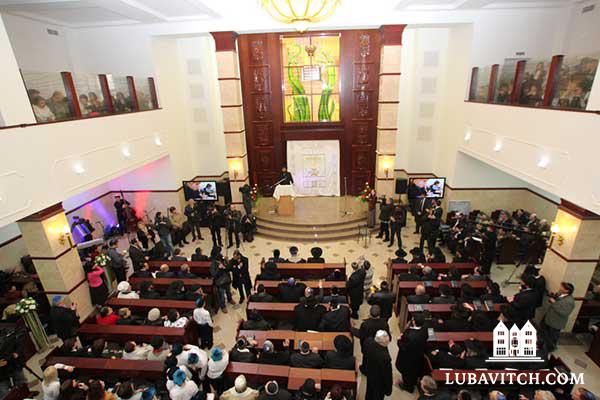 When a fire bomb landed in the synagogue in Zaparozhye, Ukraine in August, many said it was a sign of the times: the current government in the battle for Ukraine is anti-Semitic. For Rabbi Nochum and Dina Ehrentreu, Chabad representatives to the city, it was one time incident, with anti-Semitism in the city – controlled by the current government for the past four years – always a non-issue.

“The Jewish community of the city is a proud one, we are very positive about the future,” says Rabbi Ehrentreu, the city’s chief rabbi. The pride is expressed in their newly constructed synagogue that was the target of the attack. “Immediately after the attack, which caused only some cosmetic damage, the community came together and repaired the exterior. It is now back to its former glory.”

It is not just that the exterior is back to what it was before, local Jews – originally frightened that it was a target – have now returned in larger numbers to the synagogue  at the center of the community. “Many of the ten-thousand Jews who live here, did not hear about the building of a magnificent synagogue in the city. Now that we were in the news, many more began to come to the synagogue. It’s turned into a blessing after all.”

Since the fire-bomb attack, the community decided to conduct more of its events than is usual, on its premises, raising awareness of and pride in its Jewish programs. Over the High Holidays several prayer services were led for more than 800 worshipers. The synagogue now has tight security.

The community has also been reaching out and assisting Jewish families who’ve come to escape the conflict. Community members arranged housing and the Ohr Avner Chabad day school warmly welcomed the children into its classrooms.

Speaking by phone, Ehrentreu told Lubavitch.com, that he just completed building the Sukkah, which could seat over 200 guests. “There will be many programs through the holiday catering to the different segments of the community.”

While the city’s stability has seen improvement over the summer, it is struggling economically.

“Those, who in the past would never ask us for any financial aid, today have no qualms about asking for basic necessities. The middle-class situation has noticeably diminished.”

Yet, he hopes that as the situation gets better, there will be an influx of funds to what was once a stable economy.

“No matter what the situation is, we will try to assist anyone in need – material, emotional or spiritual.”

Related Articles
View All
Chabad Representatives in Ukraine Stay Put, Appeal for Help
Chabad Shluchim state-wide are struggling to meet the growing demand on their respective programs and services while funding from local business people has dropped by…
Features
Remembering The Struggle for Russian Jewry
Ninety-three years ago today, Rabbi Joseph I. Schneersohn (1880-1950), sixth Lubavitcher Rebbe, and the leader of Russian Jewry at the time, was freed from Soviet-imposed…
Features
Wordsmith: Tamim
The tamim is unflappable. He does not sway with the winds of change, nor bend to meet the expectations of others. He is a simple…
Features
Remembering Rebbetzin Chana: Jewish Feminine Role Model
Rebbetzin Chana Schneerson, a feminine role model of Jewish activism and proponent of Jewish scholarship, mother of the Lubavitcher Rebbe and wife of Rabbi Levi…
Features
Defying Religious Stereotypes on Israel’s College Campuses
By the time Zehavit Mohager, a psychology student, began her studies at the University of Haifa at age 23, she had already completed her army…
Get Inspiration to your inbox!
Newsletter
Join our weekly newsletter for inspiration and updates
Donate
Find Your Local Chabad Center
Chabad
About Chabad-Lubavitch
About Chabad Lubavitch
The Rebbe
Headquarters
Magazine
Magazine
News
News & Updates
In The Media
Impact
Social and Humanitarian
Social and Humanitarian
Education
Education
Community
Community