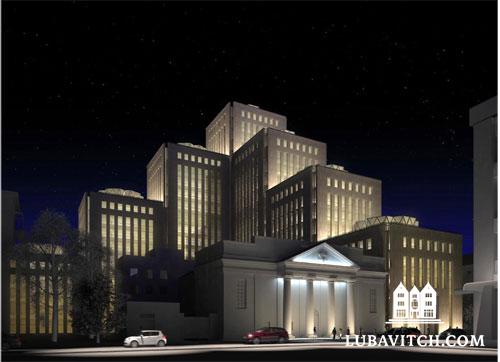 (lubavitch.com) Straddling two blocks, a $60 million, 400,000 square foot Jewish Community Center and Holocaust Museum now under construction in Dnepropetrovsk will be a city within a city, a showcase for a Ukrainian industrial backwater waking up to boom times in Jewish and civic contexts.

The seven-tower, twenty-story museum and center multiplex will stretch around the existing Golden Rose synagogue is sweeping in its scope of programs.

“Any Jewish person, any age and every time of the day will have a reason to spend quality time at the center,” said Dnepropetrovsk’s Chief Rabbi and Chabad-Lubavitch representative, Shmuel Kaminezki. At maximum capacity, the center will hold over 10,000 people, a chunk of Dnepropetrovsk’s 50,000 Jews.

Funded by Gennady Bogolubov, president of the Jewish Community of Dnepropetrovsk and partner in the international industrial firm Privat Group, the center will cement the city’s Jewish renaissance.

A Jewish mall in the center will offer easy access to kosher food and lifestyle necessities on a level unfathomable in the lean days of the communist and immediate post-glasnost era. Kosher restaurants, coffee shops, fast food joints, an Internet café, a bookstore, Judaica store, supermarket and pharmacy will line the first two floors of the center. Currently, ten tons of kosher meat products are produced in Ukraine, including ten different kinds of deli meats, per month. When the center is completed, demand is expected to grow further.

Above the mall, floors of auditoria and suites will become home to programs for children, children with special needs, women’s groups, adult education and seniors. A wing is reserved for Jewish courses offered to the community’s college students and for its on-site business school. Teachers at the school and community workers will live in the 30 apartments within the complex.

Weddings will be held under the stars near a permanent rooftop tent. Festive receptions and banquet will take place in the plush catering halls a short elevator ride away. A massive commercial kitchen will provide all the kosher catering.
In an adjacent space, the museum, planned with direction of Yad Vashem in Israel, will be more than Ukraine’s largest Holocaust memorial. It will also house one of the world’s finest collections of contemporary Jewish art and a museum of modern Jewish life. Igor Kolomoysky, Privat Group partner, is funding the museum complex and collecting the art that will form the nucleus of the museum’s collection.

“The project will provide resources for the Jewish community, but it plays an important role in the development of the entire city,” said Zelig Brez, executive director of the Jewish Community of Dnepropetrovsk. While the center’s stores, hotel rooms, restaurants, and clinic will be open to all residents, Brez is especially committed to seeing all Ukrainians visiting the museum. “Today’s generation has a very limited understanding of the Holocaust, and we must change that.”

Plans for the center received enthusiastic reception from local officials. Mayor Ivan Kulichenko brought the plans along with him when he attended a conference of mayors in Belgium. He shared architectural drawing of the center with Jerusalem Mayor Uri Lupolianski to promote positive ties between the two cities.

For its aesthetic appeal, the center drew approval from the city’s architectural planning board. The outermost of seven towers stand five stories high and climb to ten, fifteen and finally twenty stories at the center. Atop each building is a large spotlight fixture that will give the complex the look of a free form menorah.  Dnepropetrovsk’s municipal chief architect Julia Saenko saluted the building as “good for the image of the city,” a step forward for democracy, freedom of religion and revitalization.

City planners were quick to approve plans for the Menorah center. Ukraine won hosting rights, together with Poland, to the 2012 Union of European Football Association (UEFA) championship games. Doubts about Ukraine’s readiness to host tens of thousands visitors has placed pressure on municipalities to improve infrastructure and increase hotel room capacity. Menorah center and all of its amenities, on track for completion within two years, is a feather in Ukraine’s UEFA readiness cap.

Officials also recognized the job growth potential inherent in a project of this magnitude. Restaurants, stores, food providers, the hotel and catering hall will be managed by independent business owners to provide self-sustaining funds for the center’s endowment. Hard numbers are not available yet, but the service and management sector jobs required to run Menorah center and Holocaust museum are expected provide a boost to the city’s middle class.

Now experiencing a boom, as evidenced by the number of cranes perched atop the steel skeletons of growing high rises, Dnepropetrovsk is faced with a widening gap between rich and poor. Menorah center stores will offer help to financially struggling families and seniors. A discount card will allow them to purchase groceries and prepared food at near or below wholesale costs. Medical clinic services will be provided on a sliding scale, and prescriptions for low-income residents will be subsidized.

To get a sense of how huge the Menorah Community Center and Museum will be, it helps to hear that its seven lights will be viewable by airplane passengers on their way to the international airport. “The largest menorah in the world,” according to Rabbi Kaminezki. Inside the hulking structure, will be programs that keep the spiritual and physical needs of those in need at the forefront.