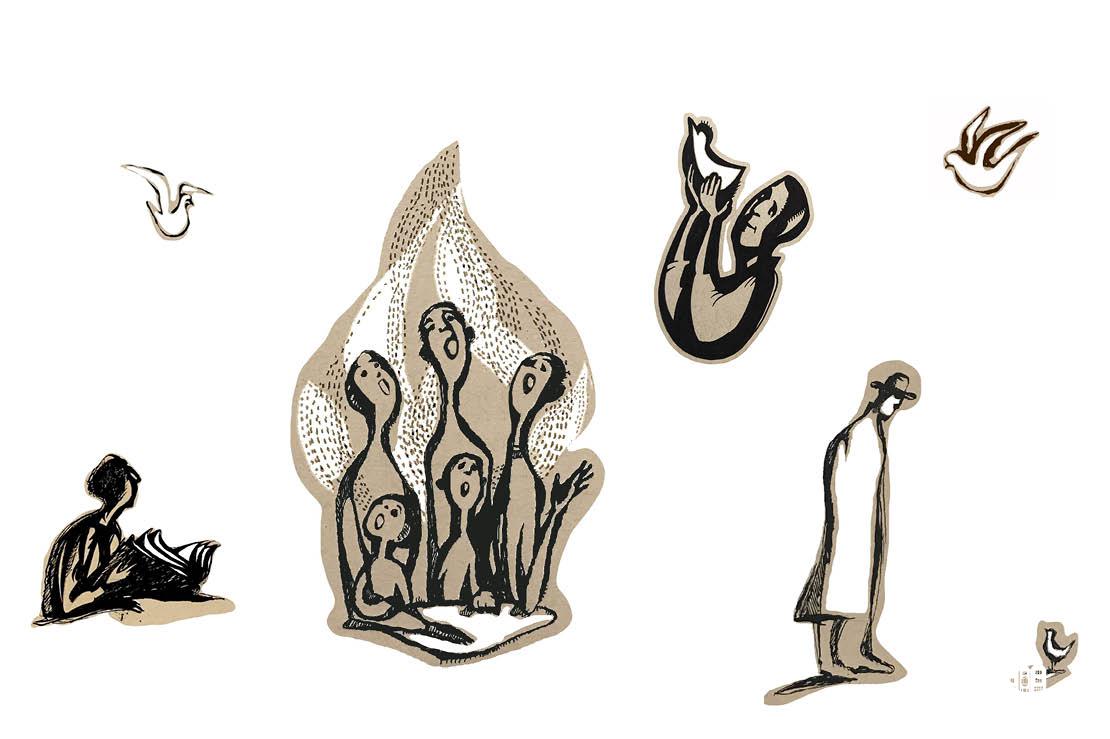 Passover celebrates the national redemption of the Jewish people, liberated from an ancient oppressor in an ancient time. But the theme of redemption is universal, and, perhaps this year more than ever, it resonates on many levels. Here, we invited some writers and poets to share their personal reflections.

Many baalei teshuva come late to the idea of redemption. I do not remember the Conservative Hebrew school I attended ever mentioning it. However, when I think of redemption, an early memory often comes to mind.

Each year my family gathered for two Seders, with several generations seated around a long dining room table. One song we sang remains my favorite. The uplifting, joyful tune of Adir Hu beautifully amplifies what the words express: the praise for Hashem, the longing for redemption, and belief in its imminence.

Some of us had better voices than others; some were more confident in the Hebrew, but all of us joining together, buoyed by that triumphant tune, gave me a sense almost beyond words of what I imagine that final redemption will feel like: a unity and a connection across all generations, rooted in faith and lived experience but transcending nearly anything we could fully conceive of or know.

“May He soon rebuild his house / Speedily, speedily and in our days, soon,” again and again the chorus pleaded. Each repetition added a little more force, as the prayer, insistent and yearning, made that redemption feel tangibly close.

David Caplan is the Charles M. Weis Professor of English at Ohio Wesleyan University and the author of six books of poetry and poetry criticism. This year, Oxford University Press will publish his seventh book, American Poetry: A Very Short Introduction.

Between Dream and Waking

After I lost my mother I went through a period where I felt a sense of meaninglessness: rage, bewilderment, and disconnection.

I called the rabbi I am close to and he told me a story about something that had recently happened. I then felt a sense of calm. I became aware of connections: between dream and waking life, between past generations and future generations, between the next world and this world, and a sense of meaning in our relationship to the classic Jewish texts. Sanity. Depth. Curiosity. Trust. A lightness. Something had shifted.

Here is the poem I wrote afterwards:

The mass of curtains failed

to block out the light which insisted.

I was railing against.

Parallel to a physical pain,

my silences shouted from eyes, from wooden floors and ceilings.

The curtains were against me

and I was protesting,

wanting to seal and bar.

Then a man had a dream:

his grandfather, whose name had been Jonah,

spoke to him from the withheld,

told him to learn from the Talmud a tractate

though the grandfather had never, when here, opened a Talmud.

The dreaming man studied it the next day, leaning over the pages

with his learning partner,

beneath the page, thousands of letters pulsing under letters.

The tractate: a Jewish man blocked on the road

by the Roman man preventing him from moving,

demanding to see inside the bag he carried under his arm.

he held his bag close, but it was pried, wrested, and then,

from inside the bag, feathers,

the birds pushed themselves, released their thick wings,

rose from the emptiness.

And weeks later the dreaming man and his wife

And why, after learning the story

and its afterstory, did the against urge

dissipate into a sadness that didn’t mind the failing curtains

letting the world in?

“Allay” first appeared in The American Poetry Review (Nov/Dec 2016). Eve Grubin is the author of Morning Prayer (Sheep Meadow Press) and The House of Our First Loving (Rack Press). Originally from New York, she now lives in London with her husband and children.

The first month of the pandemic seems like a lifetime ago. At dusk, one of those evenings mid-March, I walked down my suburban New Jersey street to deliver two bags of flour to a couple in their sixties. Because of the lighting at that hour, I could see right into their living room. They must have been playing music on their record player. He must have spontaneously taken her hand and lifted her into a dance.

I left the bags inside the screen door and made the trip back home, a chilly breeze beginning to gust. How exhilarating and fresh, how beautiful to renew love in that way. And how beautiful it was to learn the teachings of the Jewish mystics and then pray alone, at my own pace, for a couple months—my home filled with words of prayer, my children beside me (or escaping up the stairs as I called after them to remain beside me).

One night, in April, I took a walk with my eldest daughter and son. Soon, we stood before a lake, moon and stars reflecting off the black waters. My son—who’d finally emerged from the Zoom cave of our guest room and agreed to join us—imitated the loud squawking of a fleet of ducks. Away from his laptop screen for the first time in a month, he appeared alive and free. His body housing a soul that now called out unimpeded, a mini-resuscitation of the technologically dead.

And how renewed I felt when I finally returned to communal prayer under a neighbor’s oak tree. Was I really seeing, in the flesh, the faces of those I had prayed beside for almost a decade?

A rabbi with a Bronx accent chanted the portion of the Red Heifer through his mask, offering precise instruction on an ancient procedure whose impact transcended reason. The sound of the Torah reading rose over the white garage and potted plants. I recalled that, at Sinai, G-d’s voice was called “Great” because it would continue to flow for all eternity through any voice that would ever read words of Torah. A ladybug landed on my knee.

In the other universe of hospitals, friends’ fathers and mothers were dying. We comforted the surviving loved ones framed by squares on screens too narrow to hold their disorientation, their sorrow. Death was always surreal, but now we could not be sure if we were dreaming. Emails came from the university outlining layoffs. My heart fluttered before I realized I had misread a few important words.

Was it fair—not having lost a loved one—to draw any theological conclusions about what all this meant? Was it selfish and small-minded that I relished the freedom from my commute, teaching poetry from my basement as my students mourned another kind of death—that of their college social lives? People all around the world were dying or struggling to scrape by. Those more fortunate empathized, but the world’s sadness remained in the background, almost unreal.

Many secretly, or not so secretly, felt untethered from the less important things, reborn. Which reminded me of a Jack Gilbert poem about delight in the face of suffering:

at the fountain are laughing together between

the suffering they have known and the awfulness

in their future, smiling and laughing while somebody

in the village is very sick. There is laughter

every day in the terrible streets of Calcutta,

and the women laugh in the cages of Bombay.

If we deny our happiness, resist our satisfaction,

we lessen the importance of their deprivation.

We must risk delight. We can do without pleasure,

Explanations for suffering—or joy in its wake—make me feel uneasy. It’s true, however, that the majority of us remain quite blessed in obvious ways. Allowing ourselves to get caught in a thicket of despair, therefore, “lessen[s] the importance” of all those who have suffered or moved on to the next world. “We can do without pleasure,” Gilbert writes. However, to honor those who have suffered, “we must,” he warns, “risk delight.”

Delight. A sense of wonderment and newness, especially when encountered in the ordinary or familiar, in that which we have overlooked in our habituation. In Hebrew—Ta’anug. A delight, the Jewish mystics say, felt most profoundly not in a departure from daily life, but simply because. We will not understand this chapter of misfortune—like all the other chapters of misfortune—until the one great day when all is explained. Until then we might pursue a form of Jewish delight, tuning in to the wonderment of daily life, revivifying our connection to our heritage, and—the old counterintuitive secret to tasting the deepest delight—inconveniencing ourselves to help others with their struggles.

Yehoshua November is the author of two poetry collections, G-d’s Optimism (a finalist for the Los Angeles Times Book Prize in Poetry and winner of the MSR Poetry Book Award) and Two Worlds Exist (a finalist for the National Jewish Book Award and the Paterson Poetry Prize). His work has been featured in The New York Times Magazine, Harvard Divinity Bulletin, The Sun, Virginia Quarterly Review, and on NPR.

Two summers ago, while my family finalized our aliyah to Israel from the New Jersey suburbs, a few favorite songs found themselves repeating on our Spotify playlist. One was a catchy song by Israeli singer Udi Davidi called “See My Light,” which is in fact filled with rabbinic teachings about redemption. The refrain is a quote from Rabbi Hiyya’s statement in the Yerushalmi Talmud (Berachot 4:2): “This is how Israel’s redemption begins, little by little, everywhere it goes, it goes and multiplies.”

The song gave me a little comfort as I spent the weeks packing up our life in the USA. When we first landed in Israel, and in the ensuing months, I certainly did not hear the bells of redemption ringing. Yet now, more accustomed to daily life and perhaps more sensitive to the spiritual nuances of the atmosphere here, not a few days pass by before I sense a little spark, a frisson, of redemption, geulah. These moments happen when I am out in nature, exploring the historically overloaded landscape of Israel. Vistas which appear in the Bible, were won and lost by numerous civilizations, and still remain a pleasant option for a Jewish family outing.

I feel redemption when my otherwise fully American children recite a verse from the Torah by heart like it is second nature, their natural sweetness blending with the sweetness of our tradition in a way that can’t be separated. Even as shops and businesses are shuttered because of the government’s response to the coronavirus, what should be a glum public mood is elevated by the goodness of the people of Israel. A young, secular smoothie-stand owner brought to his knees in debt still gives a free daily shake to every beggar who approaches his shop. Witnessing such an act of kindness, I looked at him with surprise and he pointed upward, “None of this is from us, you know?” I think I do know, little by little.

Sarah Rindner is a writer and teacher who lives in Israel. Her work can be found on bookofbooksblog.com.