More Questions For The Seder Table 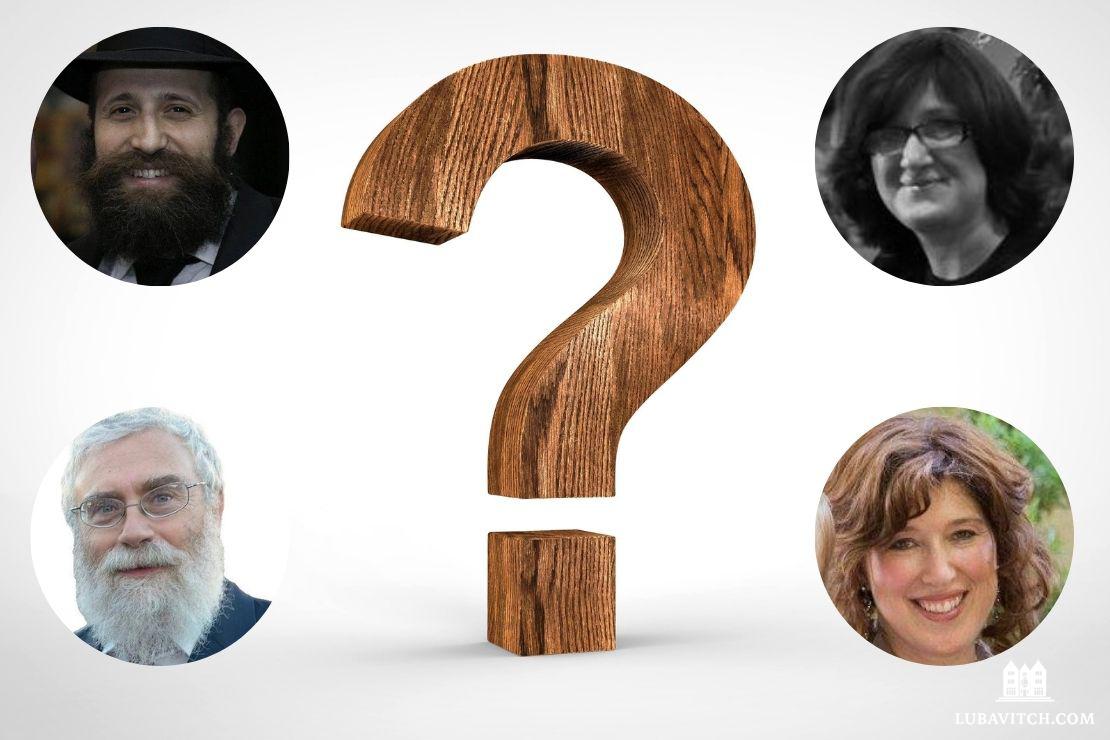 Jewish people love to ask questions. As part of the Passover tradition, we ask four at the Seder table. But if you pay attention, there’s usually a question in every statement and every answer. In honor of Passover, we asked four Chabad representatives our own set of questions:

Abba Perlmutter, The Shul by the Shore, Long Beach, California

1. You have 15 minutes with someone who has never done a Passover Seder before. What part of the Seder do you do with them?

Dinie Cohen: The basics. Matzah and maror and the four cups so they have the opportunity to fulfill their obligation. Then I’d take time to explain the soul of each of the Seder’s 15 steps to personal freedom so we walk away as more G-d-conscious Jews.

Dov Yona Korn: Maggid, I want to tell him who we are!

Abba Perlmutter: The four cups, matzah and marror, but I’d save at least 7 minutes to explore the idea that we are slaves to ourselves and the meaning of true freedom.

Shani Katzman: Matzah. I’d speak about matzah as the food of faith and healing, but mostly I’d try to connect with them in a soulful way so that a fifteen minute encounter becomes a lifetime relationship.

2. The Haggadah speaks of four types of children, and the Rebbe adds a fifth, the child who doesn’t show up. You get to add a sixth. Who is that?

DC: Someone who has never experienced a seder illuminated by the Rebbe’s Chasidic explanations.

DYK: A millennial Jew who can’t relate to all of this and needs to re-contextualize the seder as the mechanism by which we not only remember the past but advance to the future.

AP: The individual who walks among us now, apathetic to Judaism. He grew up observing the traditions and rituals, but has turned his back on all of it. He may come to the Seder, but could care less to be involved. He slouches indifferently at the seder table.

SK: Recently I was playing a game with my granddaughter, when she picked a card that asked “what would you add to the 10 commandments?” She looked at me and said, “that’s ridiculous.” What could we possibly add to the fifth child who doesn’t even show up?

3. If G-d hadn’t redeemed the Jews from Egypt, where would we be today?

DC: We wouldn’t be! Had we stayed a second longer, we as a people would not exist.

AP: Depends. If Moses were with us, we would establish Yiddishkeit in Egypt while acclimating to life in a foreign land. If you take Moses and Torah out of the picture, we’re done. We’re Egyptians in two generations and our history until then, is merely an interesting backstory.

SK: Stuck in a slave mentality without even the vision to know what freedom is.

4. The Torah says that by the time the 10th plague came around, the Egyptians rushed the Jews out of Egypt with gifts. What memento of their sojourn in Egypt would you have wished to take?

DC: The permissible magic so I could help make everyone’s life easier, simpler and faster.

DYK: A selfie proclaiming to future generations: “Righteousness pays off.”

AP: In a slave mindset, I’d grab money and things that would help me survive a journey into the unknown. With hindsight, the historian in me wishes we had preserved the writings and artifacts of our ancestors.

SK: I would just leave and say “get me out of here, I don’t need anything.”

5. You get to add a fifth question to the Four Questions. What is it?

DC: I plead the fifth.

AP: What can I do to make sure my children are so passionately in love with Yiddishkeit, they pass it on to the next generation, and the next, and the one after that?

SK: Why are we still doing this here, in this way? Jews have been doing this for so many years. It’s time we were home, in Jerusalem.