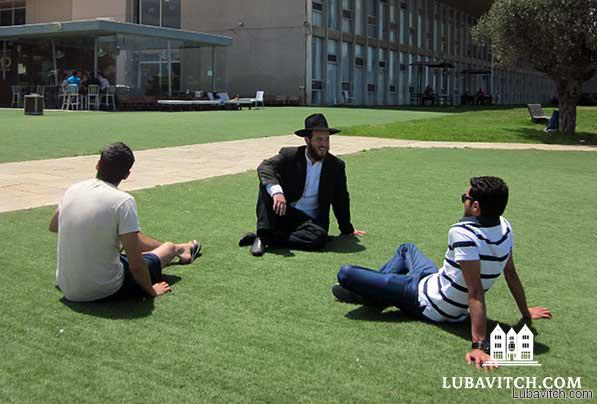 Students with the Chabad on Campus rabbi at the University of Haifa.

By the time Zehavit Mohager, a psychology student, began her studies at the University of Haifa at age 23, she had already completed her army service, done her share of partying and traveled to Mexico. Mature and worldly beyond her years as is so often the case with Israeli university students, she had ambitions, a sense of responsibility and focus.

But raised with minimal Jewish practice, life on a college campus in Israel offered her little in the way of Jewish spiritual opportunity. Lagging behind their American equivalents in Jewish activity, college campuses in the Jewish state are new to the idea of Chabad student centers, a curious irony given that for most Israeli students, being Jewish and knowing how to relate to that are light worlds away.

“Here they all know that they are Jewish,” says Rabbi Dovid Kurtz, director of Chabad on Campus in Israel. But that alone doesn’t work against the indifference and ignorance of Jewish tradition and culture among the nation’s college students. Except for the fact that Hebrew is their native language, many are essentially illiterate in Judaism.

Add to that, as Mohager says, that “when your studies are so overwhelming, Judaism and spirituality take a back seat,” making it easy for the college years to pass without any real spiritual engagement. “It falls to us,” says the Chabad representative, “to help students make the fact of their Jewish identity meaningful to them,” an ambitious objective given the cynicism and suspicion with which many Israelis typically regard religion.

Chabad-on-Campus’s Israel division opened three years ago on 25 campuses in Israel. Mr. George Rohr, the philanthropic pillar of Chabad on Campus International, which counts 246 Chabad on Campus centers serving some 500 campuses in the U.S. and abroad, spearheaded the opening of the division in 2012, when only six college and university campuses were served by Chabad in Israel.

Two years ago, after Rabbi Tanchum and Mushki Rivkin established Chabad at the University of Haifa, Mohager began participating at their activities. “The image the Israeli has of a rabbi most definitely does not include him visiting students, in the lunch room or at student events,” she says. “And here are Tanchum, Mushki and their family, in middle of the dorm celebrating Chanukah with many students who would never go to a religious event.” 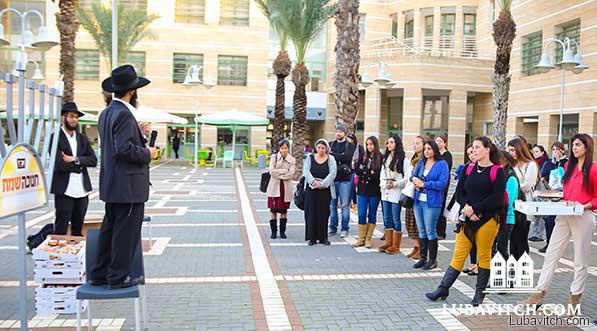 In Israel where Jews tend to marry Jews, campus representatives confront a different set of issues, some that make bringing students to the table in the first place, a challenge. As a country mired in bitter political battles, often around religious issues, many students avoid religious association, say the Chabad campus representatives. Others regard religion with cynicism and suspicion, attitudes that have developed from negative experiences.

So Chabad representatives focus on events that bring people together in shared celebrations and holiday programming. Tanchum’s out-of-the-box ideas had him setting up roulette tables—symbolic of the lottery that Haman the villain made in the holidays story—with Purim masks and noise makers, reminding students that Purim is coming. On the eve of Shavuot, when eating dairy foods is customary, he and his children combed the campus handing out ice creams with an invite to the reading of the Ten Commandments.

Mohager says that the Rivkins have found a way to reach the students with respect, openness and acceptance. “The Rabbi defies the stereotypical image students have of rabbis and religion. He reaches out to us in the student lounges, and brings Judaism to us,” she says.

With 12,000 students, the College of Management Academic Studies (COMAS) in Rishon Lezion, is the largest undergraduate school in Israel. When he began serving on campus, Chabad Rabbi Dotan Korati met with the student union administration to vote on installing a new religious services department.

“There was a tense vibe in the room; it was a new idea and the supporters of the position were frightened of the debate that awaited them,” recalls Korati. Several minutes into the meeting, someone asked the question: “Everyone knows that at times religion is connected to politics. Will you have any political agenda? Do you represent a political party?” 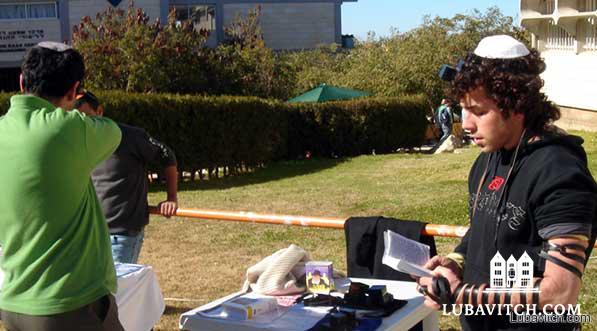 Korati responded emphatically in the negative: “Chabad is here to unite.” The student union unanimously voted to create the new department.

At the Technion, Israel’s equivalent of MIT, Yosef and Devorah Rosenberg moved at a brisk pace, making introductions to students attending this highly competitive environment. It was a difficult beginning, but eventually they got a Torah study class going with a very small handful of students. Today, the Rosenbergs offer a good variety of classes that are attended by several dozen students every week. Two hundred participate in the “organized chaos” of Shabbat dinners where traditional fare, song, storytelling, and Torah sharing appeal to students.

Nationwide, there are some 40 colleges and eight universities, with the largest campuses of about 30,000 each at The Hebrew University of Jerusalem and the University of Tel Aviv. Chabad on Campus expects to grow the number of its representatives over the next year, says its director, Rabbi Moshe Shilat, with an additional ten couples.

Rafi Refolei, an academic counselor at Netanya Academic College, says that many students—particularly those who have backpacked through Asia where Chabad became a second home to them—share respect for and an openness to Chabad. “People know that they are here to help others; they are giving.” He notes that while politics is divisive in the Israeli community, “Chabad is outside of the political circle and has thus earned the respect of” of many admirers.

Bat El Ben Zur, 24, who has a degree in psychology and is now majoring in human resources, had negative experiences with religion as rigid and unwelcoming.

“You could never ask any questions; it was always we do it this way and that’s it,” she offers, as she makes her way to Shabbat dinner at the home of Netanya Academic College’s Chabad representatives, Rabbi Shenur and Musya Landa.

Learning about Chabad when she attended a lecture on employment and Judaism, Ben Zur was pleasantly surprised. The lecture, a part of the Rohr Jewish Learning Institute’s Hebrew division, was developed with the college student in mind. 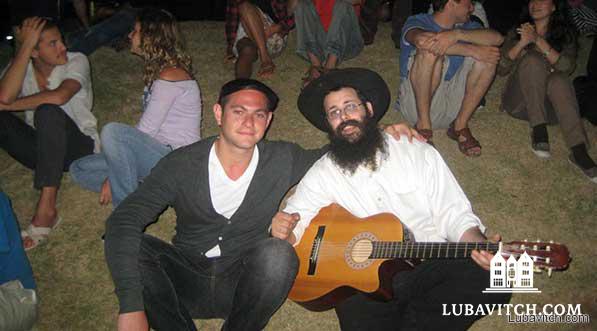 The rabbi’s accessibility, she said, seemed out of character to her. “You could ask questions, you could engage them in conversation and they are always there to answer any of my concerns.” The students who participated reflected the diversity of the Jewish community—religious, traditional and non-religious. The freedom to explore Judaism at Chabad, without “pressure, with acceptance, allows you to grow at your own pace.”

Law student Eran Asiss joined a Chabad class after seeing it advertised on a campus billboard. He too, found the experience refreshing. Growing up, he said, his religious experience consisted of rules and regulations. “I didn’t feel any connection to the observance. At Chabad my questions were welcome and they always have a good explanation.” He hopes, he says, that Chabad on Campus will create a course on Jewish ritual practices and their underlying reasons.

Still a foundling project, few Chabad campus centers in Israel enjoy their own facilities. The University of Haifa has provided Chabad representatives with living quarters for their family where students join for Shabbat services and dinner. At the Ashkelon Academic College, the campus gave Chabad use of an office and space in the dorm building to host Shabbat meals. By and large, say Chabad campus leaders, campus officials and the student unions have been welcoming and supportive.

“Chabad has brought a new atmosphere of Jewish life to campus,” says Nati Peretz, the past head of the Ashkelon Academic College Student Union, who has worked on integrating the local Chabad into the student union since its establishment in 2014. “Chabad began small, offering a lecture series, and has quickly turned into a major force of Jewish life on campus.” It has integrated successfully, he says, because its representatives have found a way to be true to their values while respectful of others.

In their first encounters with Israeli students, Chabad representatives say that Israeli students often project cynicism and a condescending attitude towards anything Jewish. Kurtz practices patience, and knows not to allow that to become an obstacle in his goal of developing a relationship with students.

“The attitude is just a façade built over the many years of negative feelings towards religion. But if you read between the lines of even the most cynical of students, there is a search for the truth about Judaism,” he says. “With a lot of love and respect, you can find the human being, the soul on the other side of the mask.” 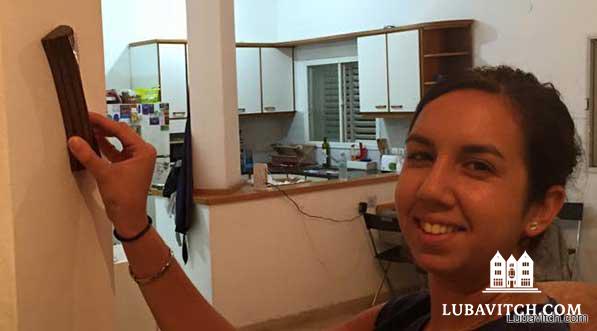 Students concede that once the barrier is broken and they begin to attend programs, attitudes towards Judaism change. Calling it the best thing that happened to her in her lifetime, Ben Zur, says that it opened a new world to her. “My outlook on Judaism is forever changed.”

Rabbi Shmuel Hadad and his wife Bareket lead Chabad activities on the Ashkelon campus. Students on his campus, he found, simply regard Judaism as irrelevant to them, antiquated and suitable for their grandparents’ generation of synagogue-goers.

“In Ashekelon, I do not have to deal with students who want to intermarry; rather I have to make Jewish observance relevant to them.” Hadad’s office has become an address for students seeking him out to discuss any number of concerns. That his views and ideas may be more conservative and traditional than theirs, does not stop them from consulting with him.

Zehavit Mohager does not often share the same ideas and opinions as are presented by Chabad, but the differences, she insists, don’t preclude a personally enriching relationship with Chabad. “The fact is that that they are accepting and open to hear other people’s opinions and difference. Their home is a like my own family’s home. Everyone is greeted and welcomed equally there.” 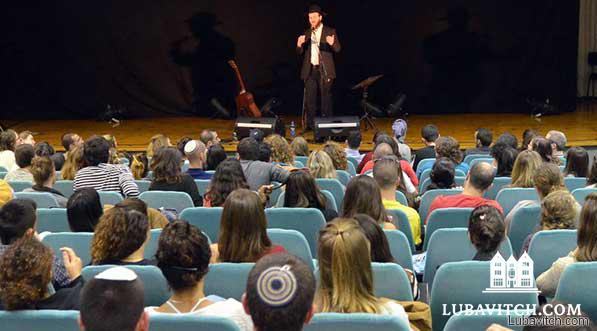 Related Articles
View All
Chabad Opens Student Center At Vanderbilt University
Of the top 20 American universities still without a Chabad-Lubavitch Campus center, only two remained. One was the private Catholic university Notre Dame. The other,…
A Chabad Campus Welcome: Mezuzah Season
As students move back into their dorms on campuses nationwide, Chabad is doing its thing, welcoming them with opportunities to make it a spiritually enriching…
Chabad on Campus Hosts Law Shabbat
Missouri Supreme Court Judge Richard B. Teitelman was the featured guest speaker at a recent Shabbat dinner hosted by Chabad on Campus, for Jewish students…
Chabad Rabbi Inspired South Carolina’s Anti BDS Law
South Carolina passed a historic bill into law that will make businesses think twice before boycotting Israel. Representative Alan Clemmons, Chairman of the South Carolina…
Students Pack the House at Chabad of UVM
Burlington, the largest city in Vermont, was named as the “best college town in America” by Travel and Leisure last year.
How Does She Do It?
It’s that time of year when hosting an endless stream of guests over the Sukkot holiday becomes a breathless marathon. Although men are often helpmates…
Campus
Students Surprise Refugees with Busload of Food
Students touring Poland with Chabad on Campus responded to an unexpected chance to assist Ukrainian refugees
Campus
On Board With COCI
"I wanted to create an environment so that the communal Jewish world would see Chabad for the powerhouse that it is, in terms of its…
Campus
Wounded Warriors Bring Jewish Pride To Campus
COCI has been bringing wounded Israeli soldiers to college campuses in the US to help boost Jewish pride among students
Campus
A Bridge Built In Buffalo
Fifty years of Chabad at SUNY Buffalo
Get Inspiration to your inbox!
Newsletter
Join our weekly newsletter for inspiration and updates
Donate
Find Your Local Chabad Center
Subscribe
|
Log In
Chabad
About Chabad-Lubavitch
About Chabad Lubavitch
The Rebbe
Headquarters
Magazine
Magazine
News
News & Updates
In The Media
Impact
Social and Humanitarian
Social and Humanitarian
Education
Education
Community
Community