Students Pack the House at Chabad of UVM 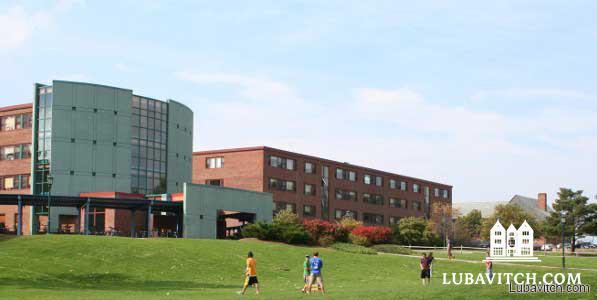 A snapshot of the University of Vermont campus. Below: The Wilhelms greeting studnets at their stand on campus; Chani Wilhelm with students.

Burlington, the largest city in Vermont, was named as the “best college town in America” by Travel and Leisure last year. The city’s numerous bike paths, coffee shops and music venues together with, arguably, the best skiing on the East Coast just a half hour drive away, are clear incentives for prospective students. It is a town that prides itself on its progressive and liberal attitudes—an environment that might seem unlikely for the flourishing and vibrant campus Chabad House that has become a favorite for Jewish students at University of Vermont.

Chabad of UVM opened in 2006, with Rabbi Zalman and Chani Wilhelm catering to the needs of the 1,500-strong Jewish student body. It started off in a small apartment where, as Rabbi Wilhelm admits, “students were climbing over each other to find a space to sit,” but has since moved into a three-story property, situated conveniently in the heart of student housing, offering more space and visibility.

Despite their Chasidic appearance and their down-to-earth, pragmatic personalities—atypical of the average Vermonter—they feel at home in Burlington. Rabbi Wilhelm is quick to point out that students are very accepting. “There is a hippie culture here. People make their own laws; they don’t eat this and that, and so they are accepting of Jewish laws because they are used to it. There is a spiritual openness here that doesn’t exist in other places.”

As many as 50 students participate at Friday night Shabbat meals, and over 350 students join Chabad of UVM’s yearly mega-Shabbaton. A remarkable achievement, considering that fewer than 10 years ago only a handful of students had any involvement with Judaism. The city’s Jewish population was disparate with no accessible community for students to be a part of.

Nowadays, many students turn up at the Chabad House after encountering the Wilhelms Friday mornings on campus, where, for the past six years, they have been religiously handing out 200 challahs each week. “It has become a ‘thing’,” Chani says. “Everyone knows that Chabad gives out challah on Fridays.”

The challahs come with an invite to a hot meal later on that evening but, more importantly, they let students know that Chabad is approachable. Getting to meet the Chabad representatives in a neutral location, students take away a clear message: Chabad is here for you.

The message is warmly reinforced when students walk into the Chabad House. The first time Michael Sharf, a post-baccalaureate pre-medical student at UVM attended a Shabbat meal, he asked Chani her goal. “She said, ‘to make you feel at home.’ It has been home ever since.”

The Chabad House doubles as the family home, and with six young children, daily Torah classes, student social events and a kitchen that is constantly operational, the environment is dynamic and alive.

“Students come to learn, but they also come for the family atmosphere,” says Chani. Sharf, a member of the Chabad student board, agrees. “The children are always around to play with and teach us fun lessons in Judaism. The Wilhelms are a second family to me.”

The primary goal at the Chabad House is teaching. Students “are not going to hear about concepts in Judaism if we don’t tell them,” says Rabbi Wilhelm. Every opportunity, whether through one-on-one learning or group classes, is taken to ensure that students gain exposure to the depth of Torah and its outlook.

Many students, such as Matthew Segil, a sophomore at UVM majoring in neuroscience, have had little or no Jewish education and aren’t aware of the Torah’s approach to life issues. He explains. “I was initially surprised to see such a large family, and was surprised by certain Orthodox customs I was not familiar with. But, after I came to understand the laws and their purpose, they made sense to me.”

Matthew is currently attending Sinai Scholar classes with Rabbi Wilhelm. “I feel as though Chabad has contributed as much to my learning this semester as any other class I am taking.” This sentiment is shared many students at UVM, some of whom have subsequently gone on to study at a yeshiva.

Chabad of UVM plans to grow their student reach and enlarge on the Jewish educational and spiritual experience they are providing. Their goal is to establish a nurturing and solid Jewish community at UVM. As Chani says, “our students should know that the only reason we are here is for them.”

Related Articles
View All
At Texas Tailgate Lots to Give Thanksgiving For
It was football Thursday at A&M University, a rare occasion, when most of the games are on Saturday. Chabad at the university together with the…
Arizona’s Mountain Range Jewish Community on the Rise
With views overlooking the San Francisco Peaks, the future home of Chabad of Flagstaff will sit on a central road, close to Northern Arizona University—the…
Chabad at WVU Opens New Space on Campus
Location, location, location. For Chabad of Morgantown, West Virginia, that was at the top of their wish list in their search for a new home.
Chabad Opens Lehrhaus at Cambridge University
Cambridge, England, home to one of the world’s oldest and most prestigious universities, has for centuries provided students with access to some of the best…
For Law Student at Chapel Hill, A Circle Closes
When Kathryn Kushner first walked into Chabad at the University of North Carolina in Chapel Hill, her grandfather Abraham Kushner, a Lieutenant in the New…
Chabad Houses Go Pink For Breast Cancer Awareness
October is Breast Cancer Awareness Month, dedicated to raising awareness of the disease and many Chabad centers from the Bronx, New York to Austin, Texas,…
Rabbi Ranked Top Teacher at Colorado University
Rabbi Yerachmiel Gorelik, adjunct lecturer in the Liberal Arts Department of Philosophy at the Colorado State University, was ranked among the top six teachers by…
Campus
A Place At The Table
Friday Night @Chabad on Campus
Campus
Kugel for Culinary Students?!
New Shluchim to the Culinary Institute of America and Marist College
Campus
Torah Learning for College Students, Redefined
New JewishU program offers high-quality Torah courses
Campus
Jewish Pride on the Field
Chabad at UCF Celebrates Students’ Soccer Victory
Get Inspiration to your inbox!
Newsletter
Join our weekly newsletter for inspiration and updates
Donate
Find Your Local Chabad Center
Subscribe
|
Log In
Chabad
About Chabad-Lubavitch
About Chabad Lubavitch
The Rebbe
Headquarters
Magazine
Magazine
News
News & Updates
In The Media
Impact
Social and Humanitarian
Social and Humanitarian
Education
Education
Community
Community