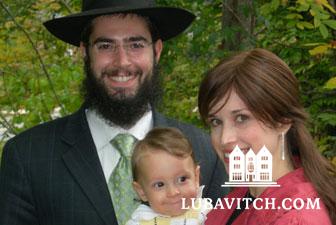 Of the top 20 American universities still without a Chabad-Lubavitch Campus center, only two remained. One was the private Catholic university Notre Dame.

The other, Vanderbilt University in Nashville, TN, joined rest of the Ivies and exclusive colleges this week when Rabbi Shlomo and Nechama Rothstein were named Chabad campus representatives.

“Shlomo and Nechama are personable, open, intellectual and full of energy. I think they will be the perfect match for Vanderbilt,” said the director of Chabad of Tennessee, Rabbi Levi Klein.

The Rothsteins will be moving into their apartment, which is shouting distance – literally – from freshman housing, at the end of November, right before Chanukah. The opening of Chabad center at Vanderbilt is in merit of Rabbi Zalman and Rebbetzin Risya Posner and is under the auspices of Chabad of Tennessee.

Both Rothsteins are about the same age as the students they will serve, but they’ve been preparing for this position for years.

Nechama Rothstein grew up in Berkeley, CA, with the community mikvah in her backyard. Both of her parents work closely with longtime Berkeley shluchim, Rabbi Yehuda and Miriam Chaya Ferris. Her mother runs the mikvah. Her father is a kosher supervisor. Having UC Berkeley students at the Shabbat table, listening in to the discussions and offering up her own opinions was part of her upbringing. “The students became part of our adopted family,” she said.

Rabbi Rothstein was raised in Baltimore, MD, the oldest of eight children. He traveled the world for school, living in Chicago, Montreal, Melbourne, and New York before landing in Tennessee.  The Rothsteins’ son Menachem Mendel is 9 months old, and they are waiting to see if his babbling takes on a Tennessee twang.

Like anyone new to campus, the Rothsteins’ first goal is to make friends. “We want to find out what Jewish students are looking for, what their needs are,” said Rabbi Rothstein.

Welcoming Chabad’s establishment of a campus center is another milestone in Vanderbilt’s bid to attract more Jewish students. A 2002 Wall Street Journal cover story trumpeted former chancellor Gordon Gee’s wishes to see the percentage of Jewish students rise above its average 2%. That year, the Ben Schulman Center for Jewish Life opened, with it a kosher-vegan café “Grins.”  Vanderbilt recruiters struck out for Long Island and other schools where Jewish populations are high. Current, Jewish student stats put the percentage in the 12-13% range.

“Not having Chabad on campus was like missing a spice from the cholent,” said Dr. Steve Schach, professor of computer science and computer engineering, referring to the stew traditionally served on Shabbat afternoons. “Students are all away from home and have no family to turn to nearby. Chabad couples are available for students 24/7.”

Students have already made their enthusiasm for Chabad known. On one of the first walks Rabbi Rothstein took around campus, a student bounded over asking: “Are you Chabad? Is Chabad coming to Vanderbilt?”

Jeremy Doochin, a sophomore, started a “Chabad at Vanderbilt” student group last year. Doochin attended Sunday school at Chabad from the age of eight. “Having Chabad on campus will provide more in the way of Jewish intellectual and spiritual life here, in addition to a greater sense of community,” he said. “It will be a great transformation.”