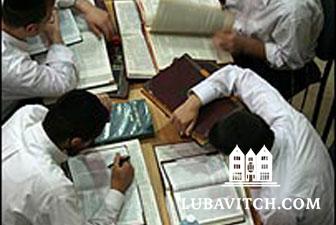 Chabad’s new curriculum is on its way to cracking the Talmudic code for yeshiva students and adult learners. This is part three in a Lubavitch.com series on Chabad's new initiatives in education, social and religious outreach to be launched at the International Conference that formally opens today, at Lubavitch Headquarters in NY.

Long the shibboleth separating the serious scholar from the also-rans, the skills needed to decipher a page of Talmud are being arranged into a comprehensive set of step-by-step lessons by a consortium of Chabad representatives, educators and curriculum experts.

Once completed, the curriculum will be the only one of its kind, filling a gap in Jewish education that was discussed as far back as sixteenth century, (namely by Rabbi Judah Loew, the Maharal of Prague). Project director Rabbi Yosef Rosenblum, principal of Yeshiva Schools in Pittsburgh, recalls when the Lubavitcher Rebbe spoke of the need for a systematic approach to building Talmud skills in a talk in 1985.

“Students have said a page of Talmud looks to them like a bunch of black ants crawling on white paper,” said Rabbi Rosenblum. “If we are looking to create independent learners, we have to improve our success rate in teaching this very tough subject in our schools.”

Taking on a monumental task is a team of educational leaders and one exceptional piece of software. Curriculum expert Rabbi Aharon Fried, Ph.D., an associate professor of psychology and education at Stern College for Women, is a leading member of the group. Rabbi Fried took the mystery out of evaluating Hebrew reading ability when he developed the Kriyah Scan, a test of reading used by yeshivas and day schools around the world. Rabbi Meir Fachler and Rabbi Zalman Salamander from Gemara Berura are deeply involved with and supportive of the project. Yeshiva University’s Rabbi Chaim Feurman has been a vocal supporter of the curriculum’s aims.

Chabad’s Gemara curriculum is a scaffold for teaching with “Gemara Berurah,” a popular computer program that slices and dices a page of Talmud into understandable bites, and then shows how they work together to form multiple cogent arguments. Gemara Berurah’s creators have been eager to see the Chabad curriculum realized. On the user end, news of the project has generated much excitement among Jewish educators within and beyond Lubavitch circles, according to Rabbi Rosenblum.

Available funding will determine how quickly the much needed program moves from R&D to the classroom – and beyond. Jewish Learning Institute, Chabad’s wildly successful adult education courses with 250-plus satellite locations, is seeking to tailor the curriculum until it is fit for grown ups. Talmud’s mystique draws in many curious Jews aware of the subject’s reputation as a training ground for analytical thinkers and great legal minds. The completed curriculum will allow adults to savor the Talmud on their own.

At present, the lucky few learning Talmud with some elements of the future curriculum may be found in Yeshiva Schools in Pittsburgh. There 55 fifth through eighth graders sit in classrooms where the future of Judaic studies has arrived early. A flat panel touchscreen monitor has taken the place of the blackboard. During the lesson, a piece of the text beams up on the screen – eliminating the distractions of sloppy handwriting, broken chalk and adding the visual punch that highlighting the Hebrew words’ roots, prefixes and suffixes brings. At least once a week, the students head upstairs to the computer lab to flex their own mouse clicks as they use Gemara Berura to take on pieces of Talmud for themselves.

Success in the form of dawning comprehension brings smiles, approving nods from the class’s rabbi. Little do students know how much their accomplishments will mean to thousands of students just like them – or much older – who have been waiting for this kind of curriculum for nearly five hundred years.

Related Articles
View All
Initiatives at the Chabad Conference: Smile On Seniors (SOS)
As an outreach activity, visiting seniors is even older than the people it serves. But Chabad’s new “Smile On Seniors” approach to bonding with the…
Jewish Children in Public School: Chabad to Combat Assimilation
A conspicuous 66% of Jewish kids are missing in action. They are, according to National Jewish Population and Avi Chai studies, the number of Jewish…
Chabad Conference Initiatives: Jewish Adult Education Goes Online
If online MBA programs and YouTube got together and had a smart Jewish baby, it would probably bear a striking resemblance to Chabad-Lubavitch’s newborn distance…
Education
Jewish Day Schools Make The Grade
Amid a national discourse about the transformation of America’s school system in the wake of the pandemic, Jewish day schools are enjoying an unexpected boost:…
Education
Ckids International Crowns Australia’s First ‘JEWQ Champion’
Ethan Ickowiz from JEMS Bondi, NSW is the new JEWQ Champion. Ckids International crowned Ethan “Ultimate JewQ champion of Australia” at the JEWQ grand finale…
Education
A Quiet Moment
It is a typical, bustling morning at a middle school in Camarillo, California, and the students are about to take an algebra quiz. But first,…
Education
Remembering Rebbetzin Chana: Jewish Feminine Role Model
Rebbetzin Chana Schneerson, a feminine role model of Jewish activism and proponent of Jewish scholarship, mother of the Lubavitcher Rebbe and wife of Rabbi Levi…
Get Inspiration to your inbox!
Newsletter
Join our weekly newsletter for inspiration and updates
Donate
Find Your Local Chabad Center
Subscribe
|
Log In
Chabad
About Chabad-Lubavitch
About Chabad Lubavitch
The Rebbe
Headquarters
Magazine
Magazine
News
News & Updates
In The Media
Impact
Social and Humanitarian
Social and Humanitarian
Education
Education
Community
Community