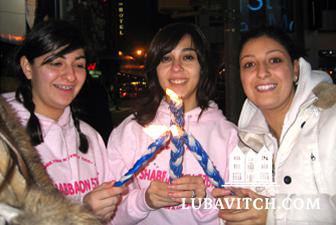 Public school students at a havdalah in NYC

A conspicuous 66% of Jewish kids are missing in action. They are, according to National Jewish Population and Avi Chai studies, the number of Jewish elementary and high school students who attend public schools and are not enrolled in any form of religious education. On the at-risk continuum for the disappearing Jew, these kids are in the red zone.

Chabad-Lubavitch has a 60-year track record of pulling Jewish children in public schools back from the brink of spiritual identity washout, with a host of newer programs gaining momentum. At this week’s International Shluchim Convention, Chabad representatives will be sharing strategies for making the problem – public school – part of the solution.

The 250 students enrolled in Torah 4 Teens, a project of Chabad at Flamingo, Thornhill, Ontario, say Rabbi Shmuli and Chani Nachlas’s approach works. By participating in Torah 4 Teens, students receive high school credits. They can get community service credits when they participate in T4T’s volunteer programs.

School perks may draw students in, but it’s not why they stay, according to participants. Melissa Perez, a T4T graduate recalled that she “started off going because I would do anything for an extra credit. But I went in for the first class, and after that I didn’t care about the credits. I was so intrigued by what they had to offer, I just wanted to go to the next class.” After her T4T experience, Melissa enrolled in a post-high school Jewish seminary.

The prospect of earning college credits drew 45 students to Michigan Jewish Institute, a Chabad-run fully accredited four-year college, this semester. Located in Bloomfield, MI, the students dual enroll in their high school and MJI. Completing courses in Hebrew language, the American Jewish experience, and other Judaic studies subject gives them a boost in the college credit game. Because the school is an accredited college, state funds are available to offset some tuition costs, which removes the financial hurdle for those wishing to study at MJI.

Few Jewish students attend Detroit area high schools, said Paul Levine, director of marketing and student development. Those who come to MJI generally do not have an opportunity for Jewish studies otherwise. MJI “is an opportunity before they go away to college to give them a Jewish experience so they will be strong enough to survive the wilds of college,” he said.

Groundbreaking on a new 14,000 square foot MJI building – with classrooms, offices, and a cybercafé – is planned for the spring.

Chabad’s work with public school students dates back to the 1940’s. It was one of the first priorities of the previous Lubavitcher Rebbe, Rabbi Yosef Y. Schneersohn, of righteous memory, when he arrived in the United States. Released Time laws, permitting students to take an hour a week from the public school day to pursue religious education, were the basis of Chabad’s early efforts in this sphere.

Currently, the National Committee for the Furtherance of Jewish Education’s Released Time program sends 130 teachers to 60 schools across the New York metro area. For the class, students are transported off public school campuses – to avoid church and state issues – to local Chabad centers.

Hannah Gulko, 9, a fourth grader in a Forest Hills, Queens, public school enjoyed “listening to the stories that they told about Jewish times and what happened long ago” at her Release Time program. Her father, Yan, said at Released Time, Hannah “picked up information about the holidays and not mixing dairy and meat. We don’t encourage nor discourage her, but she has the will to do these things. It is interesting for us to see it.”

In Los Alamitos, CA, a court ruling allowing religious clubs in public high school gave rise to Chabad’s Jewish club at the local high school. Rabbi Shmuel Marcus hauls pizza, falafel, hotdogs to a classroom every Tuesday school for a “surprise kosher lunch” and Jewish discussion. Students tell him, “If you are stranded in public school, in a very, very non-Jewish setting, it feels very good to eat lunch with other Jews with a visibly Jewish person.”

Notorious for trying on and discarding identities, teenagers seem to be sticking with the spirit of the Chabad programs after their high school graduation. Rabbi Marcus has helped Los Alamitos graduates apply to spend a year studying in Israel. Recently, a parent stopped him at a grocery store to share news that her son not only brought his tefillin to college, he helped his new roommate put them on with a blessing, too.

Staying on track is helped along because Chabad’s reach extends into college. Every fall Rabbi Nachlas phones Chabad centers at the universities where Torah 4 Teens graduates enroll to make the connection between the teens and the campus’s Chabad representatives. He’s introduced the many T4T alumni matriculating at University of Western Ontario to the Chabad couple on campus, Rabbi Mordechai and Nechamie Silberberg.

Chabad representatives will learn more about this during the Conference of Shluchim this week. Their goal, they say, is to locate Jewish kids missing in action and restore them to active participation in Jewish life.