Initiatives at the Chabad Conference: Smile On Seniors (SOS) 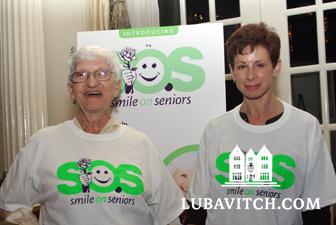 The following is one of the many new initiatives to be launched at the International Conference of Chabad-Lubavitch Shluchim which begins tonight, at Lubavitch Headquarters in NY.

As an outreach activity, visiting seniors is even older than the people it serves. But Chabad’s new “Smile On Seniors” approach to bonding with the elderly is a spry young program, getting ready for its breakout moment at the International Shluchim Convention.

“Smile on Seniors” pairs volunteers with senior buddies for a half hour of interaction each week. Lubavitch Center of Essex County, NJ, under the leadership of Rabbi Boruch and Devorah Klar began taking volunteers to visit nursing homes several years ago. In March of this year, “Smile on Seniors” debuted and quickly attracted 50 volunteers from West Orange, Montclair, Morristown, Caldwell and beyond.

“As successful as our group and holiday programs for seniors were, we wanted to reach people on an individual level,” said Rabbi Mendy Kasowitz Lubavitch Center’s program director who runs SOS with wife Altie Kasowitz. Area assisted living homes made plain their eagerness to answer SOS’s call for permission to visit their residents. “No one refused. All they wanted to know was how soon we could come.”

With a rapidly growing volunteer base and a burgeoning list of seniors awaiting a visit, the Kasowitzes had more on their hands than a simple community program.  With encouragement from Lubavitch World Headquarters, SOS developed its program materials to be easily reproduced in other communities nationwide.

At the International Shluchim Convention, Smile on Seniors will choose ten communities to test pilot the program. SOS of Essex will be providing the pilot communities with starter kits filled with how-to’s gleaned from their early success. Volunteer training materials, access to an SOS website, even stationery, a logo and SOS t-shirts are included in the kit. Throughout this year, the pilot SOS communities will stay in touch to celebrate and share successes and learn from the challenges of running new programs. Should all go as planned, SOS should be seen in more and more of Chabad’s centers worldwide in the coming years – and not a moment too soon.

As the Boomer generation blows out more and more candles on their birthday cakes, demand for services for seniors is growing. In 2000-2001, the National Jewish Population Survey found 19% of American Jews were over the age 65, a percentage that likely skyrocketed in the intervening years. Faced with the prospect of living decades beyond receiving their gold watches, aging Boomers are redefining what it means to be older, retiring with the expectations of a second wind, anticipating more opportunities for study and growth.

The Lubavitcher Rebbe, Rabbi Menachem M. Schneerson, of righteous memory, defined the golden years as a time to increase, not decrease, one’s activity. In the fifties, the Rebbe began Tiferes Zekeinim Levi Yitzchak, a program of Torah study for seniors named for his father Rabbi Levi Yitzchak Schneerson.  More than a few Chabad representatives spend significant portions of their day visiting and studying with seniors in their area. SOS will now enhance and multiply this aspect of their social outreach.

A number of factors prop up the prospects for SOS’s popularity. Seniors living in assisted living settings have plenty of time to receive visitors, freeing up their buddies to come and visit them after work or on weekends. On the buddy side, the value of participating in SOS strikes a chord. “Almost everyone has a senior in their life and they know how much a visit means to them,” said Rabbi Kasowitz. Motivating potential buddies to flip their good intentions into action is the growing trend for bar and bat mitzvah age preteens to choose a “mitzvah project” for their milestone year.

One star volunteer Zachary Kessel, a student at Jacob Kushner Hebrew Academy, became so close with his “bubbe buddy” at Brighton Gardens that he had his bar mitzvah aliyah, the first time he was called up to the Torah, there.

More than a nice thing to do, SOS volunteers may be saving the lives of their senior buddies, studies say. A University of Chicago study found that lonely aging adults had higher blood pressure readings, by as much as thirty points, than the non-lonely. In 2002, a study conducted at UC Irvine uncovered a link between an older person’s risk for heart trouble and social isolation.

Last year, the International Journal of Geriatric Psychology published a study that concluded: “elderly suicide attempters [were] most likely to be a widowed woman suffering from social isolation, loneliness and depression.” However, plopping a senior in the midst of a crowd no matter how friendly was not enough to assuage loneliness. “The number of contacts did not generally influence the reported experience of loneliness… the quality of their relationships did.”

That then, is the focus of SOS as it works to provide seniors with meaningful friendships to brighten their golden years.

Related Articles
View All
Editorial: In the Courtyard of the Rebbe
Rabbi Adin Steinsaltz likes to tell about the time he had seven projects on his table, and felt he needed to drop some of them.…
Features
Remembering Rebbetzin Chana: Jewish Feminine Role Model
A feminine role model of Jewish activism and proponent of Jewish scholarship, is being remembered today, on her yahrzeit.
Features
Holy Folly: Using Humor to Reach for G-d
How humor can make room for a deeper truth otherwise concealed by the apparitions of this world
Features
After The Collapse
At the site of the collapse, they clamored for something, some remains of their loved one.
Features
Tradition, Tradition!
Is Judaism too ritualistic?
Get Inspiration to your inbox!
Newsletter
Join our weekly newsletter for inspiration and updates
Donate
Find Your Local Chabad Center
Subscribe
|
Log In
Chabad
About Chabad-Lubavitch
About Chabad Lubavitch
The Rebbe
Headquarters
Magazine
Magazine
News
News & Updates
In The Media
Impact
Social and Humanitarian
Social and Humanitarian
Education
Education
Community
Community