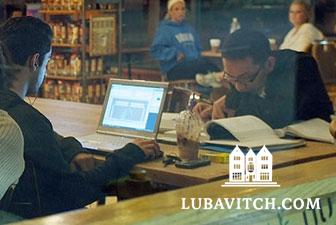 This is part four in a Lubavitch.com series on initiatives in educational, social and religious outreach, announced at the International Conference of Chabad-Lubavitch Shluchim in New York.

If online MBA programs and YouTube got together and had a smart Jewish baby, it would probably bear a striking resemblance to Chabad-Lubavitch’s newborn distance learning venture.

JLI made the leap to cyberspace because of the pervasive use of the Internet as a primary tool for learning about the world, and the advantages of the e-learning environment.

MySpace has over 106 million registered users as of one year ago. If MySpace were a country, it would be eleventh largest in the world between Japan and Mexico said Rabbi Berel Bell who is overseeing the project.

“It is the Rebbe’s mandate to use modern technology to spread Jewish knowledge. We cannot afford to miss out on reaching these people."

JLI's courses have attracted 85,000 students worldwide because of the way information is presented. Along with teaching standbys–a lecturer and a textbook–JLI presents video clips, discussion breakouts, even music when appropriate as part of each lesson.

Students have likened the JLI experience to the charged atmosphere present in their most memorable college classes. Translating the richness of JLI to the web is a challenge that has kept the group from venturing into online courses until now. Online educational software matured rapidly as universities and corporations have capitalized on the web’s power to teach.

In 2004, 87% of four-year colleges offered distance-learning courses, up from 62% in 1998. Corporate e-learning is a $12 billion business. Today’s tools go far beyond fuzzy webcam mini-movies or corny PowerPoint graphics.

JLI Online will be adapting the software and environments that now train tomorrow’s MBA and powerbrokers into a tool for powerful Torah teaching. The JLI Online courses also adapt the best elements of the social aspects of the Internet.

Like Wikipedia, the online user-created encyclopedia, the eLearning courses will be a local maven production. Chabad representatives already delivering the JLI classes will be the stars on the e-learning screens. In the spirit of YouTube, a capacity to pass the class along to friends will be built into the experience.

JLI Online will continue JLI's tradition as a dynamic, pedagogically sound and intellectually stimulating vehicle for Jewish growth, but now it will be available to a whole new group of people. Online, classes will begin whenever and wherever a person is ready to learn. This change welcomes the people interested in JLI’s gifts but are too far, too busy, or too physically challenged to attend a course.

Translating the JLI experience into a click-and-you’re-there site is also a way to reach the most vulnerable link in the chain of Jewish continuity – teens. A Pew Research Center survey published last month found 93% of all teens use the Internet. The dot-com generation is “much more likely to find Jewish learning online than to walk in the door of an unfamiliar Torah class,” said Rabbi Bell.

We are using e-learning as a bridge to reach people we cannot otherwise. We are hoping once people see there is something interesting here, then they will want to gain a personal connection and come through the door.

Related Articles
View All
Cracking the Talmud, New Curriculum Solves 500-Year Conundrum
Long the shibboleth separating the serious scholar from the also-rans, the skills needed to decipher a page of Talmud are being arranged into a comprehensive…
Initiatives at the Chabad Conference: Smile On Seniors (SOS)
As an outreach activity, visiting seniors is even older than the people it serves. But Chabad’s new “Smile On Seniors” approach to bonding with the…
Jewish Children in Public School: Chabad to Combat Assimilation
A conspicuous 66% of Jewish kids are missing in action. They are, according to National Jewish Population and Avi Chai studies, the number of Jewish…
Education
Jewish Day Schools Make The Grade
Amid a national discourse about the transformation of America’s school system in the wake of the pandemic, Jewish day schools are enjoying an unexpected boost:…
Education
Ckids International Crowns Australia’s First ‘JEWQ Champion’
Ethan Ickowiz from JEMS Bondi, NSW is the new JEWQ Champion. Ckids International crowned Ethan “Ultimate JewQ champion of Australia” at the JEWQ grand finale…
Education
A Quiet Moment
It is a typical, bustling morning at a middle school in Camarillo, California, and the students are about to take an algebra quiz. But first,…
Education
Remembering Rebbetzin Chana: Jewish Feminine Role Model
Rebbetzin Chana Schneerson, a feminine role model of Jewish activism and proponent of Jewish scholarship, mother of the Lubavitcher Rebbe and wife of Rabbi Levi…
Get Inspiration to your inbox!
Newsletter
Join our weekly newsletter for inspiration and updates
Donate
Find Your Local Chabad Center
Subscribe
|
Log In
Chabad
About Chabad-Lubavitch
About Chabad Lubavitch
The Rebbe
Headquarters
Magazine
Magazine
News
News & Updates
In The Media
Impact
Social and Humanitarian
Social and Humanitarian
Education
Education
Community
Community