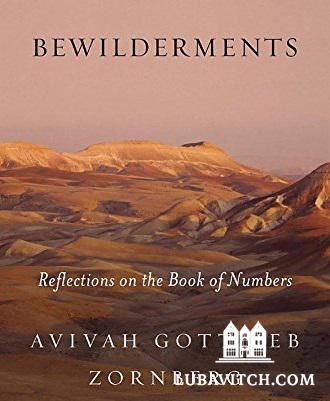 BEWILDERMENTS: REFLECTIONS ON THE BOOK OF NUMBERS
By Avivah Gottleib Zornberg

In Bewilderments: Reflections on the Book of Numbers (Schocken Books), Avivah Gottleib Zornberg introduces her discussion of Bamidbar, the fourth of the Five Books of the Torah, by outlining the dramatic terrain of the “midbar”—a great and terrible wilderness. The book opens and closes with a census (hence the alternate name “Sefer Hapikudim” or Book of Numbers)—but those counted at the end of the book are not the same as those counted in its beginning.

Over the course of forty years, an entire generation dies in the desert because of the sin of the spies who brought back an evil report about the Land of Israel. The word “midbar” also suggest the word “dibbur”—speech. But it is not G-d’s speech that marks this book, but the conversations, the doubts, the fears of the generation that will ultimately vanish without entering the land. The tone of the speech of this book is of bewilderment and skepticism.

The Israelites send spies to scout out the land of Israel. These spies report on the lushness of the land and then negate the positive report with the single word “efes”—but . . . The people who have been redeemed from Egypt and enveloped in G-d’s love cannot fully believe that they are worthy of that love, and continually doubt it. They complain about the manna, they ask for meat, the cry because they have no water. Again and again, they express the fear that G-d brought them out of Egypt only to let them die in the desert.

And yet, this is the generation referred to in our tradition as the “dor de’ah”—the generation endowed with special knowledge—a people seeking conversation with G-d. Zornberg seeks to reconcile these two views, seeing how speech, of necessity limiting and obfuscating, also allows room in the gaps for new understanding and connections to emerge.

Like Zornberg’s other books, Bewilderments is a dense read, citing Midrash as well as the classic medieval commentators and Chasidic masters, and interweaving her discussions with literary and psychoanalytical sources. She does not attempt to resolve questions so much as to allow us to appreciate their full complexity and possible ramifications.

In her discussion of Korach’s rebellion, Zornberg considers his characterization of the “whole congregation as holy.” They are all perfect and complete: why then should Moshe be exalted above them? Moshe attempts to persuade them to reconsider their position but they do not respond: Korach is unwilling to engage in conversation—and thus he becomes irredeemable.

Rabbi Yehudah Loewe, the Maharal characterizes the “ba’alei machloket”—the masters of dissension, as the ones who are unyielding and unwilling to go beyond the “strict level of the law.” Those who build and seek peace, by contrast, accept the inevitability of distance between two positions or perspectives. The Kabbalists see creation as occurring in a space from which G-d retracts his light to create a vacuum; in that emptiness, the world can be created. Likewise, the separations and differences between the ways scholars characterize Torah is the “space” that allows for the creative development of new insight. It is the gaps and insufficiencies in language that ultimately allow room for creative connection.

Zornberg discusses the troubling tale in which after the death of Miriam, the well that sustains the Jewish people in the desert disappears and they cry out for water. G-d commands Moses to take his staff and speak to the people and draw water out for them. Moses reproves them for persisting in their lack of faith, and he hits the rock. G-d is angered by his action and tells him that as a consequence, he will not enter the land of Israel. This tale is all the more difficult because on an earlier occasion, shortly after the Jews left Egypt, Moses was in fact commanded to hit the rock with his staff and bring forth water for the people.

Moshe’s error, then, seems minor and all the more understandable. For why would G-d tell him to take the staff if he was not to use it to hit the rock? Zornberg, citing Ha’amek Davar, explains this by describing the growth process that was meant to have occurred over the course of the journey in the desert. The generation that entered the desert needed to see revealed miracles like the plagues wrought with Moses’s staff and the manna falling from heaven. For them, the miraculous well of Miriam following them on their travels was “natural.”

But now, about to enter a new land, they had to learn to engage with a new mode of interaction. They needed to see that “speaking to the rock,” using soft words of prayer and Torah, could also effect change. In hitting the rock, Moses continues to use the “language of the desert” and the result is that he is unable to lead the Jewish people into the land, where a different mode of leadership will be needed.

Zornberg looks at the speech of the five daughters of Zelaphchad in striking contrast to many of the “words” in the book of Bamidbar. They come before Moses as he begins the assignment of portions of land in the Transjordan, and as daughters of a man who has already passed away and has no sons, they ask for a portion of the land so that their father’s name not be forgotten. Moses is unsure of the law, but G-d tells him that they have spoken well, and that their request is a fitting one. They merit to have the law clarified as a result of their petition.

In having the law of inheritance of the land revealed through women, Zornberg notes the hint of the transition of leadership from Moses to Joshua—and a transition from a more “masculine” style of leadership to a more “feminine” style. As the moon reflects the light of the sun, Joshua’s role is not to innovate but to translate and transfer the teaching of Moses in much the same way that the women “midwife” the clarification of the law of inheritance by approaching Moses with their claim.

The sages point out that although the men who left Egypt died in the desert, the women “loved the land” and thus merited to survive and enter. Where Moses is frustrated by his difficulty in articulating a spiritual reality to the people (and only accepts his role as leader with much difficulty), the women embrace speech and its ambiguities and they are the ones who may cross to a new reality.

Zornberg’s insights are relevant and provocative; like the best psychoanalysts, she is able to uncover meaning in layers, probing deeper and deeper. Yet those who are deeply versed in Chasidic sources may find her approach somewhat disconcerting, for she speaks of psyche, not soul. While it is true that human experience embodies an inherent frustration that lays at the root of the human dynamic, Chasidut, in examining the nature of the soul and its dynamic of “ratzo veshov”—a relationship with G-d that fluctuates between desire and retreat—sees this process as transcendent and redemptive.

The wasteland of the desert creates an unattainable yearning and desire that ultimately must be grounded and realized in entry to the land of Israel: Torah and action. The journeys of Bamidbar must culminate in the instructions in the book of Devarim. Yet the micro-world of personal experience need not stand at odds with the macro-world of majestic meaning, and those who take the time to synthesize the two approaches will find much new food for thought.

Related Articles
View All
Books: Ethics to Live By
(lubavitch.com) Kehot Publication Society, the Lubavitch publishing house, recently announced the publication of Pirkei Avot: Ethics of the Fathers With a New Commentary, Anthologized from the…
Who Wrote the Bible: Reclaiming The Traditional View
According to tradition, Moses wrote the Five Books after the Sinaitic revelation, as transmitted to him by G-d, and gave it to the Jewish people
Books: Meditations on Mitzvot
(lubavitch.com) The face of Chabad in the twenty-first century has been the shliach and the shlucha. Incredibly dedicated and energetic couples have fanned out around…
New English Translation of Genesis With Commentaries by Kehot
(lubavitch.com) Kehot Publication Society, the Chabad-Lubavitch publishing house and Chabad of California have released a new translation of the Book of Genesis. The translation reflects…
Review Essay: The Grammar of Women’s Spirituality
IN SEARCH OF THE GENDER-NEUTRAL It is now standard to include in book introductions a tedious apology for the lack of a graceful gender-neutral term…
Books
A Defense Of Torah Judaism
As a Chabad representative at a major university, I observe that students’ big questions today center on whether the religion delivers on its ethical promise…
Books
Children’s Book Turns Personal Tragedy Into Communal Healing
A new book about Moussia Zaltzman’s life and legacy models the process of discussing painful realities with children
Books
The Tzfat Kabbalists Collection
The rare manuscripts department at Chabad’s Central Library and Archive Center contains many original manuscripts penned by the great Kabbalists. Rabbi Moshe Cordevero (1482-1570), renowned…
Books
Book Notes
The story of the dramatic rescue and emigration of thousands of Iranian Jewish students to America
Get Inspiration to your inbox!
Newsletter
Join our weekly newsletter for inspiration and updates
Donate
Find Your Local Chabad Center
Subscribe
|
Log In
Chabad
About Chabad-Lubavitch
About Chabad Lubavitch
The Rebbe
Headquarters
Magazine
Magazine
News
News & Updates
In The Media
Impact
Social and Humanitarian
Social and Humanitarian
Education
Education
Community
Community