Who Wrote the Bible: Reclaiming The Traditional View 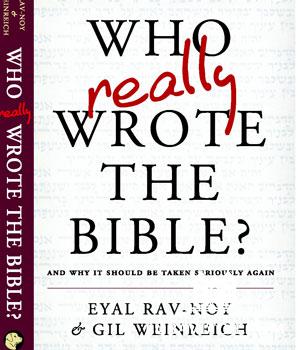 (lubavitch.com) On the holiday of Shavuot, which begins next Tuesday evening, the Jewish people celebrate the Divine revelation at Mt. Sinai and the giving of the Ten Commandments.

According to tradition, Moses wrote the Five Books after the Sinaitic revelation, as transmitted to him by G-d, and gave it to the Jewish people who passed it on from generation to generation.

But with the advent of biblical criticism, which grew out of 17th and 18th century rationalism, some scholars and academics have sought to punch holes in the accepted tradition, and have developed a plethora of theories that undermine faith in direct transmission.

Instead, they say, the Torah is a compilation of writings by many authors, developed over time, for their own political reasons. This view pegs the Bible as worthy literary work, historically interesting, but not a moral compass to live by.

Who Really Wrote the Bible: And Why It Should Be Taken Seriously Again (Richard Vigilante Books)  a newly released book by  Chabad representative Eyal Rav-Noy and Gil Weinreich debunks the debunkers and reduces the crowded byline of the Five Books down to one: Moses.

Taking apart the multi-author theory—known in Biblical criticism circles as the “documentary hypothesis”—can cause “a religious earthquake,” said Rav-Noy, director of the Jewish Learning Academy, a Chabad branch in Los Angeles, CA.

“If the documentary hypothesis is doubted, then people will have to start learning from original sources and not be guided by whatever is socially popular at the moment,” he said.

Chipping away at the documentary hypothesis’s foothold took Rav-Noy the better part of a decade. He combed through traditional sources and current Biblical scholarship to unearth flaws and internal contradictions. In his book, he also examines the motives of those who espouse the many-authors view, and points out where they break their own rules of interpretation. A final section includes examples of literary devices in the Torah that could only be the work of a single writer.

“It is brilliant material,” says Rabbi Moshe Bryski, executive director of Chabad of Conejo in Agoura Hills, CA, of the book. “People who heard Eyal deliver lectures on this topic were absolutely fascinated by it. I strongly recommend studying this book.”

Mayer Khakshouri, Ph.D., an economist and real estate developer, faithfully attends many of Rav-Noy’s Torah classes at the Jewish Learning Academy, and is drawn both by the rabbi’s approach to spiritual topics and by his grasp of “worldly and secular knowledge.”

Rav-Noy was born in Israel, and moved to Los Angeles while in elementary school. His parents (Eyal’s father was a Cal Tech physicist) sent Eyal and his five siblings to the Modern Orthodox Hillel Academy elementary and Yeshiva University of Los Angeles high school. Eyal played guitar and became a brown belt in karate.

When his parents became involved with the local Chabad center. Eyal balked.  “I had nothing to do with Chabad. It was my parents’ thing. I was not on board at all,”  says Eyal.

Eventually, however, Rav-Noy chose to join the beginners’ program at Chabad’s Rabbinical College of America, in Morristown, NJ, and delighted in challenging his teachers. “I wanted to have the answers. I never bought the idea that believers have no questions.”

Adopting a Chasidic lifestyle has not narrowed Rav-Noy’s interests. He still jams on the guitar and has added marathon running to his list of interests. “I try to blend everything I learned in the past and put it into the way I teach,” he said.

His unusual background gave Eyal insight into the mindset of readers who, he hopes, will read Who Really Wrote the Bible. The book’s easy read is largely thanks co-author Gil Weinreich, editor-in-chief of Research magazine.

“It was a difficult subject to present, but we embraced it,” said Weinreich. Weinreich met Rav-Noy when he was looking for someone to help him repair his tefillin.  Later, as a sort of thank you, Weinreich showed up for Rav-Noy’s lecture on the Bible’s authorship, a talk that incorporated seminal ideas now in the book. “I told Eyal, ‘you have to write a book.’” After much prodding, Weinreich signed on as co-author.

Finding an agent and later a publisher proved even more challenging. Battling the documentary hypothesis was too quixotic for most publishers. The pair finally cold emailed Richard Vigilante Books, a boutique conservative publisher, with a 100-word pitch.

Now that the hard work of birthing a book is done, Rav-Noy is looking to take the information to the next level. He envisions a website or perhaps a newsletter that will be a forum for people seeking to further their knowledge about the Torah’s authenticity as a Divine document. It’s a big project, but one that Rav-Noy believes in.

Related Articles
View All
Books
Today in Jewish History: The Victory in Chabad Library Trial
On the 5th of Tevet (Hei Teves) in 1987, the extensive library of the sixth Rebbe, Rabbi Yosef Yitzchak Schneerson, was declared as belonging to…
Books
In Pursuit Of Meaning
We live in an age that is more concerned with self-help, self-development, self-empowerment, self-actualization, and self-care than any other age in history, but we are…
Books
Revisiting R. Schneur Zalman: The Alter Rebbe
As I read through three biographies of Rabbi Schneur Zalman of Liadi, the founder of the Chabad movement, known as the Alter Rebbe. I was…
Books
A Defense Of Torah Judaism
As a Chabad representative at a major university, I observe that students’ big questions today center on whether the religion delivers on its ethical promise…
Get Inspiration to your inbox!
Newsletter
Join our weekly newsletter for inspiration and updates
Donate
Find Your Local Chabad Center
Subscribe
|
Log In
Chabad
About Chabad-Lubavitch
About Chabad Lubavitch
The Rebbe
Headquarters
Magazine
Magazine
News
News & Updates
In The Media
Impact
Social and Humanitarian
Social and Humanitarian
Education
Education
Community
Community