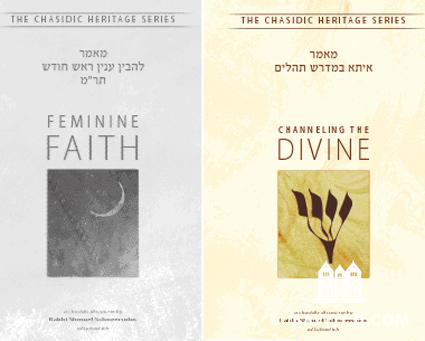 In this advance review, Shmuel Klatzkin looks at Channeling the Divine and Feminine Faith, two new translations of Chasidic works written by the fourth Rebbe of Chabad, Rabbi Shmuel of Lubavitch, and part of the Chasidic Heritage Series.

(lubavitch.com) The face of Chabad in the twenty-first century has been the shliach and the shlucha. Incredibly dedicated and energetic couples have fanned out around the world, bringing Judaism to life in places everywhere from Jackson Hole, Wyoming, to Vientiane, Laos. They get kids to join them baking matza or making a shofar, grown-ups to bake challa or dance at the lighting of a giant menora in a shopping mall.
It is only gradually that most people come to realize that everything Chabad does finds roots in a vast literature that is unique in the world—the literature of Chasidut. At the very time that George Washington was serving as President of the United States, the first Chabad Rebbe was writing books that revolutionized Jewish thought and life.
The literature of Chabad is never remote. No matter how abstract the concepts it may investigate, it is always engaged directly with the life of the reader, challenging, probing, leading deeper and deeper into the mystery and purpose of the life that we actually live.
Chasidic thought is a vast synthesis, pulling together elements from the earliest biblical sources, from rabbinic law throughout the ages, from the storehouse of stories and moral exhortation of the oral tradition, from the great medieval rationalists, and from Kabbalistic mystics. In Chasidic thought, all these elements show themselves to be linked in an organic whole of which we, the readers are equally a part. This literature grips the mind and the heart of its readers as nothing else.
Provided that we have access.
The language of this literature has posed a problem for the modern reader. How many of us are fluent in Hebrew, comfortable enough to use it to explore deep thoughts and mystical concepts? Even if we are conversant in Hebrew, more than likely, this would be in its modern incarnation. Israeli Hebrew mimics modern Western languages in many ways, with their preference for short and straightforward language growing as the years go along.
The Hebrew of Chasidic literature is another creature altogether—long supple sentences that follow an idea around corners and behind walls, or words rolling like a huge ocean swell towards the shore. It’s majestic, magnificent, moving—but only when it is comprehensible. And very few today are conversant in this kind of language.
That’s where the Chasidic Heritage Series has stepped in. The scholars who are the authors and editors of this series of annotated translations have done an amazing job of giving today’s English reader access to the spiritual treasures locked up in these books.
The latest two titles in this series, soon to be released, are entitled Channeling the Divine and Feminine Faith. Both are works written by the fourth Rebbe of Chabad, Rabbi Shmuel of Lubavitch, and both deliver a powerful message.
Channeling the Divine contains a discourse that focuses on the mitzva of tefilin and explores the mystery of how the most profound spiritual realities find expression in the very concrete act of binding boxes containing Torah parchments on one’s arm and head. Composed by the Rebbe for his son’s bar mitzva, the discourse has been repeated by Chabad bar mitzva boys for decades.
In this discourse, the child who is turning into an adult faces the reality that very few can devote their lives entirely to the study of Torah. Nonetheless, even in the midst of worldly reality, we are given a mitzva, the mitzva of tefilin, which affects us in the same way as if we had spent all our time in study.
Feminine Faith turns from a mitzva which is done by men to one celebrated primarily by women—Rosh Chodesh, the celebration of the New Moon in which women alone rejoice by refraining from normal work. The Rebbe’s profound text explores the unique gifts of the feminine—its connection to the undivided essence of G-d’s reality in a way that transcends the masculine drive for mastery and control of nature’s cause and effect. Just as boys learn the Bar Mitzva discourse, girls approaching bat-mitzvah may like the challenge of studying this and exploring the deep chasidic ideas that touch on their own unique identity as they reach the age of mitzvot. The Rebbe’s profound text explores the unique gifts of the feminine—its connection to the undivided essence of G-d’s reality in a way that transcends the masculine drive for mastery and control of nature’s cause and effect.

This discourse is a powerful meditation on the importance of the intuitive and the holistic and a sharp critique of the kind of mind that reduces the world and people to machines—the kind of mind that took power in the years after this was written and brought untold misery to millions, and to Jews especially.
Chasidic Heritage succeeds in these works and in its others simply by opening up a whole new world to the English speaking reader. To be sure, there is room for improvement—it is no small job to find an English supple enough to transmit the great and rapid flow of ideas without some static, some self-consciousness. Overuse of capitalization to express the Importance of Ideas, or of phrases such as “as such” muddy the stream when it is clarity that is needed—these and other infelicities occasionally annoy or distract.
But it is a small price to pay, and the reward is well worth it—the admission to this treasure house of the soul.

The books will be available shortly at the Kehot website www.kehot.com.