“What if I Marry Someone Who Isn’t Jewish?” Chabad-Lubavitch Responds Proactively 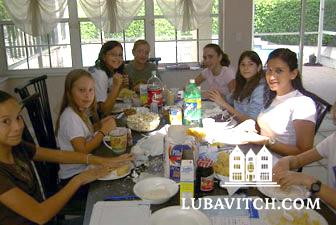 Girls in Weston, Florida, at a BMC session, where the problem of intermarriage is a topic for discussion.

A study revealing that Jewish teens–even those who think it important to raise their chldren Jewish–do not see intermarriage as an impediment, underscores the importance of Chabad's extra-curricular educational programs.

Barely out of the "boys are gross" stage, girls in over 200 Bat Mitzvah Clubs from Copenhagen to Columbus, OH, begin preparing for their entry into Jewish womanhood.

Through art, drama and journal entries they explore the roles of pivotal women in Jewish history, the feminine mystique within Jewish holidays, and quite often why marrying a Jew is important.

Rivky Unsdorfer, leader of Bat Mitzvah Club of Weston, FL, stumbled onto the topic when she was stunned by a club member’s offhand remark. Unsdorfer was demonstrating the care and keeping of a kosher kitchen, “and I mentioned something like ‘when you grow up, you’ll know what to do.’”

A girl asked, “but what if I marry someone who isn’t Jewish?” If someone could be raised “half-Jewish,” could a kitchen be “half-kosher”?

Until then, said Unsdorfer, “I took it for granted that the girls who participated in this club regarded marrying Jewish as a given.”

Studies of Jewish teens’ attitudes reveal that the young Floridian was not alone in her view that intermarrying, or known in scholarly circles as ‘exogamy,’ is not a contradiction to Jewish identity.

A survey of 1300 teens conducted by the Cohen Center for Modern Jewish Studies at Brandeis University found “62% of the teens thought it “very” or “extremely” important to raise their children Jewish – a goal to which they did not see exogamy as an impediment.”

The 2004 study also found, “teenagers from Reform synagogues were about twice as likely than those from Conservative synagogues to say that marrying Jewish is not important and about half as likely to say that it is very important.”

Addressing this hairy topic gets even stickier. Many Bat Mitzvah Club members have non-Jewish fathers.

“We never want to put a parent in a negative light, a child’s relationship with her parents is central to her wellbeing,” said Rosie Weinstein, leader of Bat Mitzvah Club of Bucks County. Weinstein sticks to the positive.

“We definitely say if you marry someone who is Jewish, your children will have one message, and religion won’t be a source of disagreement between husband and wife.”

Related Articles
View All
Jews Who Marry Out Slip Away, Studies Say. Now What?
Two new studies of US Jewry were hailed by the Jewish community as bearing good tidings: they found the US Jewish population to be larger…
Education
Two Universities React as Antisemitism Steps Out of the Shadows
While college administrators debate the limit of free speech, Chabad campus leaders take action.
Education
A Hebrew School Becomes A Community
How has one innovative Hebrew School made the Big Apple the city of choice for Jewish families?
Education
Growing Gains in Toronto
Even as he cut the ribbon on the doors of the Romano Chabad Centre, Rabbi Mendel Bernstein knew it was too small.
Education
Can An Underfunded School Actually Transform a Community?
Small Jewish day schools—those with less than 100 students—occupy a fragile place in our society. Located outside of centralized Jewish communities, these schools must fight…
Get Inspiration to your inbox!
Newsletter
Join our weekly newsletter for inspiration and updates
Donate
Find Your Local Chabad Center
Chabad
About Chabad-Lubavitch
About Chabad Lubavitch
The Rebbe
Headquarters
Magazine
Magazine
News
News & Updates
In The Media
Impact
Social and Humanitarian
Social and Humanitarian
Education
Education
Community
Community