Jews Who Marry Out Slip Away, Studies Say. Now What? 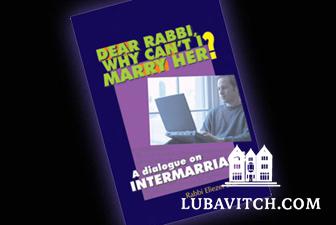 In an age of inclusiveness, can Jewish leaders afford to be coy in countering intermarriage? Studies on the pernicious consequences of intermarriage are conclusive. The response of Chabad, underscored in a new book, is unequivocal.

Two new studies of US Jewry were hailed by the Jewish community as bearing good tidings: they found the US Jewish population to be larger than previously believed, at more than 6 million people. The studies, one in the newly issued American Jewish Year Book, published by the American Jewish Committee, and the other, an as yet incomplete study taking place at Brandeis University, refute a 2001 National Jewish Population Survey whose finding that US Jewry numbered only 5.2 million, sparked concern over the community's future.

But even if the new findings are true — and they are disputed by Israel's most prominent demographer, Sergio Della Pergola, who stands by the lower figure — the AJC study still contains a disconcerting finding: the national intermarriage rate was found to be 48%.  In many communities it is much higher – ranging from 80% in Ames, Iowa to 13% in Palm Beach County Florida.

And no sooner had the jubilation over the AJC findings subsided than another study on Jewish demography delivered a sobering message. The study by sociologists Steven M. Cohen, Research Professor of Jewish Social Policy at the Hebrew Union College Jewish Institute of religion, New York, concluded intermarriage is "the greatest single threat to Jewish continuity." Entitled ""A Tale of Two Jewries: The Inconvenient Truth for American Jews," the study, sponsored by the Jewish Life Network/Steinhardt Foundation, isolated the impact of intermarriage on the Jewish upbringing of the next generation and found it to be of paramount importance. It found that as compared to the in-married, only half as many of the intermarried observe Passover, Chanukah or Yom Kippur, or belong to a synagogue.

The in-married are four times as likely as the intermarried to attend services at least monthly, to have visited Israel, to light Sabbath candles, to keep kosher at home or to volunteer in Jewish settings. While intermarried Jews were found to have experienced far lower levels of Jewish education in their upbringing, choice of a marriage partner was the most decisive factor in maintaining Jewish life.  Prof. Cohen wrote that if two siblings who grew up with equally low levels of Jewish observance and education made different marital choices, one marrying a Jew and the other a non-Jew, "the intermarried sibling will be far less likely than his or her in-married brother or sister to raise children as Jews.”

These findings are not news to Chabad Shluchim who place special emphasis on targeting young adults about to make major life decisions, including the decision of whom to marry. While the movement is committed to spreading Jewish values through a variety of educational and community services at its 2700 branches worldwide, this is a primary focus of the 100 Chabad-Lubavitch student centers on university campuses and their activities which reach an additional 150 campuses. The activists who run these programs emphasize drawing Jews in through a variety of programs and Jewish events, and especially, by inviting them to Sabbath dinners on Friday nights.

"Intermarriage is of epidemic proportions," said Rabbi Berl Goldman, who runs the Chabad House at the University of Florida at Gainesville.  Since Jewish status is determined by the mother, "if a male marries a non-Jew he cuts off all his children and future generations from Judaism by default. The Talmud says that a Jew marrying another Jew saves generations of Jews forever. That's why we focus and put so much effort in the area of assimilation and intermarriage."

Rabbi Goldman organizes social events to encourage Jewish students to meet and date fellow Jews, as well as hosting speakers and lectures who address the subject directly.  "Jewish students, even if they are dating non-Jews, need to know they are welcome for all the services we offer. But it is also important they know we are not embarrassed to speak about the issue and try to present a view they should consider."

Rabbi Eliezer Shemtov, Lubavitch representative to Uruguay, found confusion both within and outside of the Jewish community as to the reasons it is forbidden for a Jew to marry a non-Jew.  In his new book Dear Rabbi, Why Can't I Marry Her?  A Dialogue On Intermarriage, (Targum Press 2006) he addresses the main questions that come up on this issue: the ideological basis for opposing intermarriage, the question of whether opposing intermarriage is racism, and what to tell a non-Jewish friend to justify the refusal to consider them as a marriage partner.

The book is written in the form of e-mail correspondences between the Rabbi and two non-Jews, Juan and Alejandra, each of whom is involved with and struggling in a Jewish relationship.  He offers them compassion for the pain they are experiencing by not being able to marry the people they love, but explains that such a union would be a grave transgression of the Torah, and explores the concepts of love, marriage, and the meaning of a soul mate.  Over a period of some six months of lengthy correspondences, Rabbi Shemtov works through a host of relevant issues, considering questions of individual, spiritual growth within marriage, and how intermarriage establishes an essential incompatibility in that regard.

Insisting on Jews marrying Jews does not come from disrespect of other nations, writes Shemtov, but from our interest in strengthening ourselves from within. He adds that conversion of the non-Jewish partner would not be acceptable unless the convert was driven by an honest desire to become a Jew, rather than converting for convenience.

Rivka Slonim, director of the Chabad House at Binghamton University with her husband Rabbi Aron Slonim, says that over the 21 years of her service there she has seen hundreds of weddings of Jewish couples who met at the center. Every Friday night she makes dinner for 250-300 students, and feeds as many as 400 people over the whole Sabbath.

"We create a space where everyone is accepted for who they are, and bring Jews together in an organic way," she said.  "Along with the kugel and challah, we want them to develop a deep and warm and joyous connection to who they are. We believe that students to whom Jewish identity is critical have a much better chance of not intermarrying.”

"The Shabbat program is the centerpiece of the Chabad House," said Rabbi Menachem Schmidt, who runs the house at the University of Pennsylvania.  "It's an open house, we don't charge for the dinner.  We try to connect people to the warmth of Yiddishkeit, to the beauty of the Torah.  Why should somebody want to marry a Jew if they don't value their Jewishness? Anything that makes it more important to marry another Jew is of utmost importance."

Rabbi Schmidt engages students in discussions on intermarriage and believes the impact of such activities reaches well beyond those who participate in them.  "The campus is a closed environment and any impact on an individual has an impact on many people because they are going to discuss this issue with their friends."

Says Mrs. Slonim: "We're like a pool.  Some are in the deep end, some in the shallow, some just put their toes in, some are on the side and some just want to know there is a pool.  We try to be as many things as we can to as many people as we can."

More about the book: