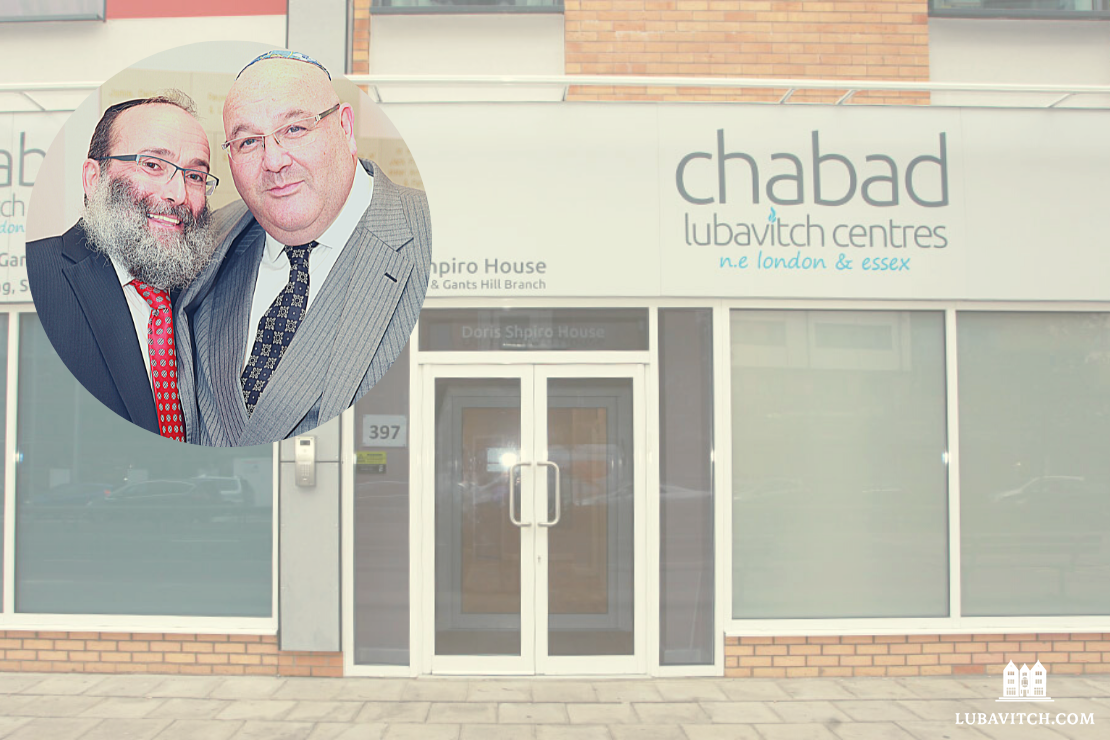 “When my father died a few years ago, I didn’t know where to turn,” says Daren Burney. “I’m not religious and don’t belong to a synagogue.”

At the time, his daughters were taking Bat Mitzvah classes with Mrs. Devorah Sufrin of ​​Chabad Lubavitch North East London & Essex so Burney decided to call her husband, Rabbi Aryeh. Twenty-five minutes later Rabbi Sufrin showed up at the hospital and “took care of everything we needed to bury my dad. I remember thinking, ‘If he can do that for someone who isn’t a member of his shul, he must be a very special man.’”

The tables turned some time later when it was the Sufrins who were in trouble. “The bank closed all our loans and wanted to take our building,” Sufrin shares. “It was bad.” Mutual friends recommended that the rabbi reach out to Burney, a prominent real estate developer. “‘Rabbi,’” he told me, “‘I don’t know what your problem is, you’re sitting on a gold mine here.’” With a couple notes on the back of an old envelope, Burney sketched out a plan to transform Chabad’s weighty burden into a valuable blessing.

The developer set right to work. He purchased Chabad’s neighboring building for a quarter million pounds and sold the air rights of both properties to a builder. Using his own architects and lawyers, Burney negotiated a deal for twenty-three apartments to be built above Chabad’s first floor location. The Jewish center was now not only debt-free, but generating a steady income as well.

It was a solid plan. But it didn’t turn out entirely as expected. The contractor went bankrupt in the middle of the projected two years of construction. That’s when, Burney acknowledges, “I realized there must be a G-d looking down on us.” His lawyers had tied up the contract so tightly that the contractors ended up paying damages to Chabad. The entire 4,500 square foot center’s fittings were covered by those penalty fees.

In gratitude, Rabbi Sufrin appointed Daren to the synagogue’s board of trustees. “I think that Daren recognized that as other synagogues are leaving the area, Chabad is the only one building here.”

Burney now serves as a trustee of Chabad and has invited friends to help the cause as well. “Our board includes lawyers, accountants, and business owners. With our varied skill set we can give Rabbi Sufrin the backing he needs to run his projects and increase Chabad’s presence.”

“Finally,” says the energetic rabbi who has served this corner of London since 1983, “we can fundraise for tomorrow’s programming, not for what we spent yesterday.”

Burney has completed hundreds of projects over his storied forty-year career, “but this was definitely the most enjoyable and fulfilling,” he insists. “Lots of people write checks, and that’s important, but donating my time and using my skills was a very fulfilling experience for me. Now, every time I go to Chabad, I feel an enormous sense of satisfaction.

“And honestly, when I think of the Divine intervention we had here, it has made me a more spiritual person. I do feel Someone is watching over us.”

Related Articles
View All
Donors
A Camera’s Perspective
The view he got of the day-to-day life of shluchim — through the lens of his camera and from the passenger seat of the rabbi’s…
Donors
The Ways We Give
Donors no longer just want to write a check. They want to be involved, they want a direct path to targeted giving
Donors
The Faces Of Giving
Who are they? Why do they give? What do they get?
Donors
Measuring Growth
Now CEO of Travel Funders Network, the Texas resident devotes a portion of his time working with Chabad representatives in the strategic development of data-driven…
Get Inspiration to your inbox!
Newsletter
Join our weekly newsletter for inspiration and updates
Donate
Find Your Local Chabad Center
Subscribe
|
Log In
Chabad
About Chabad-Lubavitch
About Chabad Lubavitch
The Rebbe
Headquarters
Magazine
Magazine
News
News & Updates
In The Media
Impact
Social and Humanitarian
Social and Humanitarian
Education
Education
Community
Community