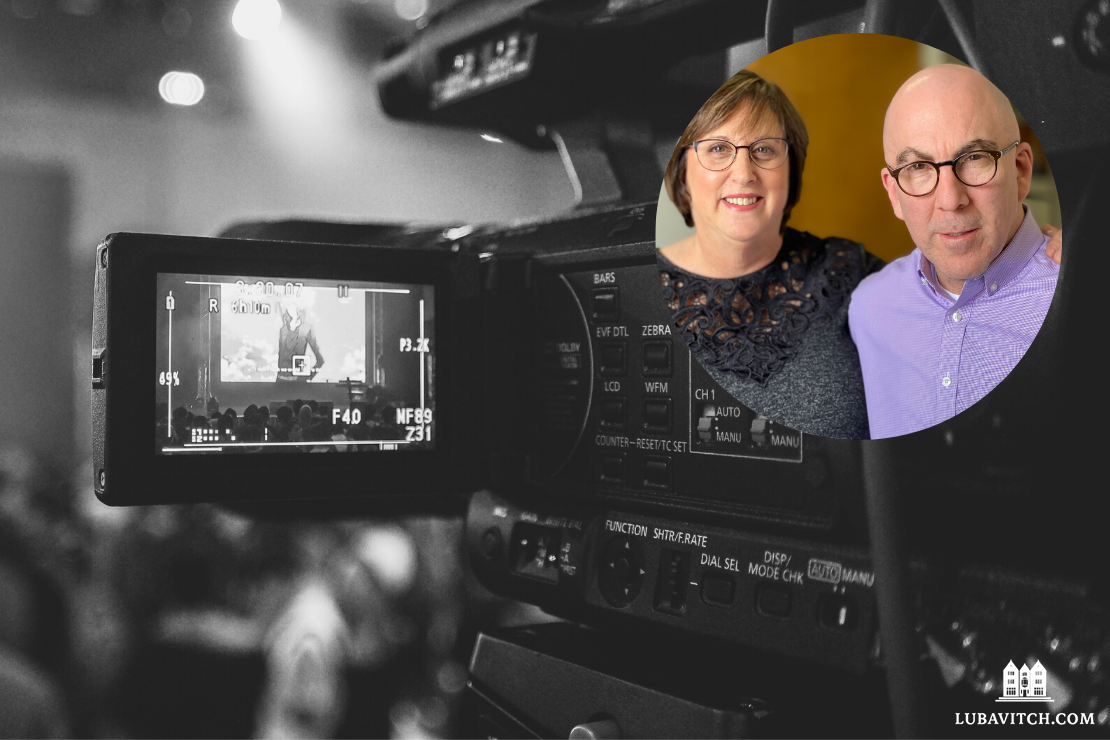 If seeing is believing, Stu Katz, the “unofficial official videographer” for Chabad of SE Morris, is a believer. The view he got of the day-to-day life of shluchim — through the lens of his camera and from the passenger seat of the rabbi’s car — has given him perspective.

When Rabbi Shalom Lubin arrived in town, he began introducing himself to Jewish business owners. After meeting Stu, Rabbi Lubin asked if he would videotape a Jewish Law Symposium he was about to host for the first time. It was the first of many volunteer videography gigs Stu would take on for Rabbi Shalom.

Stu credits his desire to volunteer to his parents. “My father took volunteering to an extreme,” said Stu, recalling the charity benefits his parents often hosted in their New Haven restaurant, and how his father, Herman “Hy” Katz, also volunteered as a clown in hospitals for many years. “My parents taught me that if you can donate time or expertise to help a cause, you do it.”

The giving in Stu and Rabbi Shalom’s relationship goes both ways. “When my mother was in an assisted living facility, Rabbi Mendy Lubin [Shalom’s brother] would visit her,” said Beth. “One day, I saw a beautiful afghan on her bed. She told me the rabbi had brought it. She just loved that afghan! Near the end of her life, the rabbi visited her more often and prayed for her.”

When his dad passed away in Connecticut at age eighty-five, Stu asked Rabbi Shalom to recommend a local rabbi to officiate. Instead, Rabbi Mendy drove two and a half hours each way to conduct the funeral. A few months later, when Beth’s mother passed away at age ninety-nine, the Katz family again appreciated the compassion shown by Chabad.

Riding with the Rabbis

Creating videos for Chabad, Stu rode shotgun with the rabbis, following them from morning services to visitations with the elderly, meal deliveries to the home-bound, welcome visits to newly arrived immigrants, and more. “I have seen quite a bit,” he said.

The son of restaurateurs who loved to feed people for free, Stu is particularly touched when Chabad provides for people’s basic sustenance. “When the rabbi brings food to someone who otherwise would not have had a decent meal, and you see the reaction on their face — to me that’s the most meaningful moment.”

Stu’s unique perspective inspired him and Beth to provide for Chabad’s future generously through a legacy gift. “When you give with a warm hand in your lifetime, you see the benefits of your giving,” he said. “But it’s also important to leave support for the future.” When the good you’ve done continues to benefit others, your legacy lives.

At the supermarket checkout counter with his mother, a little boy is overheard pleading for a candy bar. “It’s not kosher,” the mom declares. The cashier, scanning frozen cheeseburgers and shellfish that the woman has unloaded from her cart, is confused. “Do you keep kosher?” he asks her. “Oh no, we’re not Jewish. But,” she says, chuckling, “I learned this trick from the Jewish moms I see here. Whenever they say something’s not kosher, the kids just let it go and move on. Works like magic!”

It’s an old joke, but its kernel of truth remains relevant and worth repeating.

Traditional Jewish life comes with benefits: it curbs our appetites and teaches us healthy self-discipline. And by setting boundaries, the Torah cultivates positive behaviors. Think about tithing, which requires each of us to give at least ten percent of our income to tzedakah. In Hebrew, it is known as maaser kesafim.

Parting with hard-earned income can be difficult. But, consistently practiced, tithing becomes habit forming. If you accept that this portion of your income is not yours to keep, you don’t have to be in a generous mood in order to give, and you don’t have to wrestle against yourself. It is enough to know that keeping this ten percent is not kosher. Then, like the kid in the supermarket, you can just let it go and move on.

Having to give maaser also inculcates the ethic of tzedakah. The haves, the have nots, high income, low income, or middle income; there’s this basic minimum that you’ve got to give away. It is a dignifying practice, creating an inclusive community of givers where everyone is expected to contribute, and everyone makes a difference.

Today, charitable giving is increasingly done online, yet the ubiquitous pushka, or charity box, has its fixed place in Jewish households to remind us to give daily, even in small amounts. The ethic of tzedakah is so deeply ingrained in the Jewish consciousness, studies repeatedly find that American Jews give more charity than any other ethnic or religious group.

This is true even as trends in philanthropy shift. Donors no longer just want to write a check. They want to be involved, they want a direct path to targeted giving. Larger donors are looking for measurable outcomes and proof of return on their investments. The advent of online crowdfunding tools has democratized giving; and, in fact, small donations from a large population are now making a big, cumulative difference.

In this issue we wanted to look at the faces and forms of giving that vitalize Chabad and the Yiddishkeit it brings to the world. Moreover, we wanted to know which activities appeal to the people who partner with their local Chabad Houses. So we put the word out, and emails poured in with heartwarming stories of love and gratitude.

What we learned was that while it may be any one of Chabad’s numerous and diverse cradle-to-grave programs that bring people of every background through the door, it is, consistently, the deep, personal friendships they form with their shluchim that brings them back to stay and take a seat at the table.

The archetypal partnership of Jacob’s sons, Issachar and Zebulun, is a model that has stood the test of time. On pages 16-27 you’ll meet a handful of the Zebuluns: savvy investors who look for impact, legacy donors who look to the future, friends who share their unique talents, small and steady stakeholders, and so many others who pay it forward in their corner of the world.

The coming year, we hope, is queued up to be a good one. The pandemic is subsiding, the economy is rebounding, and Jewish life is burgeoning. In the last year alone, Chabad has opened up in 90 new centers and installed 200 new emissaries in 185 locations.

We also dedicated space in this issue to look back at a captivating half-a-century chapter of Jewish life in Buffalo, New York. It is a story about an iconic Chabad rabbi, miracles born of love and caring, and the incalculable dividends of giving.

Related Articles
View All
Donors
Someone’s Always Watching
“The bank closed all our loans and wanted to take our building,” Sufrin shares. “It was bad.”
Donors
The Ways We Give
Donors no longer just want to write a check. They want to be involved, they want a direct path to targeted giving
Donors
The Faces Of Giving
Who are they? Why do they give? What do they get?
Donors
Measuring Growth
Now CEO of Travel Funders Network, the Texas resident devotes a portion of his time working with Chabad representatives in the strategic development of data-driven…
Get Inspiration to your inbox!
Newsletter
Join our weekly newsletter for inspiration and updates
Donate
Find Your Local Chabad Center
Subscribe
|
Log In
Chabad
About Chabad-Lubavitch
About Chabad Lubavitch
The Rebbe
Headquarters
Magazine
Magazine
News
News & Updates
In The Media
Impact
Social and Humanitarian
Social and Humanitarian
Education
Education
Community
Community