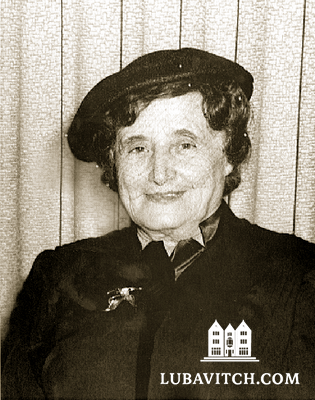 Rebbetzin Chana Schneerson, a feminine role model of Jewish activism and proponent of Jewish scholarship, mother of the Lubavitcher Rebbe and wife of Rabbi Levi Yitzchok, is being remembered today, on her yahrzeit.

In recently discovered memoirs of Rebbetzin Chana, her Jewish scholarship, Jewish education and love for Torah learning are clearly evident. Indeed, since her passing in 1964, scores of schools and women’s educational organizations were named for her.

“The Rebbetzin had a love for learning and supported Torah study” says Frida Sudak, director of Bais Chana, a center for women’s studies, in London, UK. “The Rebbe chose to memorialize his mother through this organization—a center for learning.”

Born in January 1880 to the chief rabbi of Nikolayev, Rabbi Shlomo Yanovsky and his wife Rochel, Chana showed great interest in Jewish scholarship at a young age.

Speaking of his mother, the Rebbe said that when new discourses of the then Chabad Rebbe, Rabbi Shalom Dovber, known as the Rebbe Rashab, would arrive at her home “she would record them and share them with others.”

Gifted with an ear for music, as a youngster she enjoyed singing Chasidic melodies, nigunim with her friends. In 1900, at the age of twenty, she married Rabbi Levi Yitzchok, a Talmudic scholar and kabbalist.

Rabbi Levi Yitzchok later became the chief rabbi in Dnepropetrovsk, Ukraine, where Rebbetzin Chana stood at his side in leading the Jewish community. With her positive disposition, she engaged the local Jewish community where Jewish observance was lax.

An activist, she worked hard helping refugees of WWI. “She was busy day and night caring for the refugees, beyond her normal capacities,” recalled the Rebbe in a 1984 talk.

The Schneersons’ activities on behalf of Judaism was regarded with suspicion by the communists and Rabbi Levi Yitzchok was ultimately exiled to a prison in Alma Ata, in the province of Kazakhstan, in central Asia.

Rebbetzin Chana stood at her husband’s side during his exile, and encouraged him to continue writing novel commentaries on Kabbalah and Jewish law. When ink was not made available to him, she prepared a home made formula so that he could record his ideas. Many of these manuscripts were eventually smuggled to the United States and subsequently published.

In exile, Rabbi Levi Yitzchok’s health declined. He passed away in the summer of 1944. In 1947, the Rebbe brought his mother, via Paris to the United States. “She became very involved with the community in the United States,” recalls Chana Sharfstein. “She was loved and adored by all. She was a very friendly and giving person, very involved with people, concerned about them and would share with many her wise advice.”

Sharfstein, who was the chairperson of the national Lubavitch Women’s Convention in the early 1960’s, recalls the Rebbetzin’s participation in the Jewish community. “Coming from the Soviet Union, she took great pride in the blossoming of Jewish life in the United States. Despite the suffering she endured, and the loss of her home and husband and position as the chief rabbi’s wife, she found a new life and new venues to channel her leadership qualities.”

In 1964, during the High Holidays season, Rebbetzin Chana passed away.

The Rebbe chose to memorialize his mother by delivering scholarly talks on the classic biblical commentary written Rabbi Shlomo Yitzchaki, known as Rashi. According to Rashi, his commentary is intended to be understood by a child, yet it contains multiple dimensions that scholars have been exploring since its original publication. The Rebbe’s talks fill over 200 volumes; a large percentage of them are in-depth analyses of the commentary which the Rebbe elucidated.

In 1967 the Rebbe established Keren Chana, a fund to assist with tuition for Jewish girls. On the anniversary of his mother’s passing, he would raise funds for the foundation.

“The Rebbe chose to honor his mother through teaching more Torah, so befitting her because she treasured learning Torah. She loved the girls in the Beth Rivkah schools and took pride in their exceptional education in Jewish studies,” Vivi Deren, Chabad representative in Stamford, Connecticut, who recalled Rebbetzin Chana, told the assembled at the Beth Chana Academy, in Orange, Connecticut.

“Being that our school is named after Rebbetzin Chana, we place great emphasis on teaching the girls about the Rebbetzin and her values,” says Bluma Hecht, the Beth Chana Academy principal. “She was a very dignified, regal and bright woman, yet she did not focus on the externals, and this is a value we try to teach here.”

Deren said she saw Rebbetzin Chana as a role model to emulate in her own life: “The number one quality we could learn from her is that you are in charge, you create your environment. It is up to us to emulate her ways.”

Related Articles
View All
The Rebbe’s Father: The 70th Yahrzeit
Jewish communities worldwide will this Shabbat (20 Av) be marking the 70th yahrzeit of Rabbi Levi Yitzchak Schneerson (1878-1944), the father of the Lubavitcher Rebbe,…
History
Who Was the Lubavitcher Rebbe’s Father?
(lubavitch.com) Every now and then, the world is blessed with a leader of such rare character as to inspire a following that seems to outlive…
History
Today in Jewish History: 10 (Yud) Shevat
Yud Shvat is the anniversary of the passing of Rabbi Yosef Yitzchak Schneersohn, sixth Rebbe of Lubavitch, of blessed memory, (5710/1950). On the same day,…
History
Today in Jewish History: 24 Tevet, Passing of Rabbi Schneur Zalman of Liadi, founder of Chabad Lubavitch
The end of 1812 found Rabbi Schneur Zalman of Liadi, also known as the Alter Rebbe, journeying through small towns and villages, distancing himself and…
History
Today In Jewish History: 20 Teves
Today in Jewish History: 20 Teves, Passing Of Maimonides The “Rambam,” acronym for Rabbi Moshe ben (son of) Maimon, passed away today, the 20th of…
History
Today in Jewish History: The Victory in Chabad Library Trial
On the 5th of Tevet (Hei Teves) in 1987, the extensive library of the sixth Rebbe, Rabbi Yosef Yitzchak Schneerson, was declared as belonging to…
Get Inspiration to your inbox!
Newsletter
Join our weekly newsletter for inspiration and updates
Donate
Find Your Local Chabad Center
Subscribe
|
Log In
Chabad
About Chabad-Lubavitch
About Chabad Lubavitch
The Rebbe
Headquarters
Magazine
Magazine
News
News & Updates
In The Media
Impact
Social and Humanitarian
Social and Humanitarian
Education
Education
Community
Community