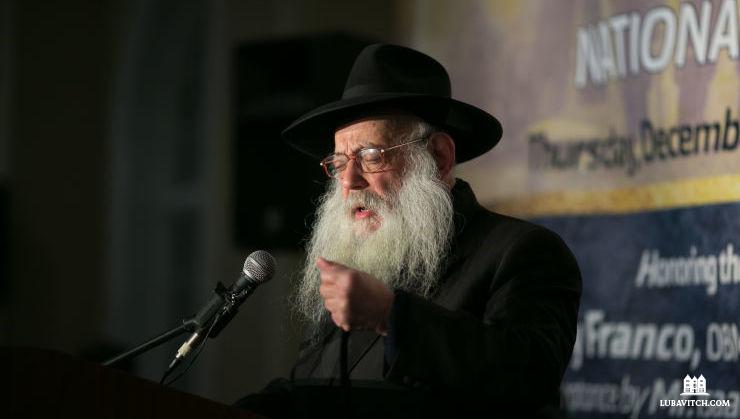 Back to Issue
By Dovid Zaklikowski

Rabbi Leibel Groner, long-time aide to the Lubavitcher Rebbe, passed away on April 7, 13 Nissan from the Covid-19 virus. He was 88.

A direct descendant of Rabbi Shneur Zalman of Liadi, the founder of Chabad-Lubavitch, Rabbi Groner was born in Jerusalem, in 1931, to Rabbi Mordechai Avrohom Yeshaya and Menucha Rochel Groner. The elder Rabbi Groner was a fundraiser for Colel Chabad, the oldest social organization in the Holy Land. He moved his family to New York when Leibel was a child. Colel Chabad opened a New York City office and became a staple of the small Chabad community in Brooklyn.

Leibel joined the Lubavitch Yeshivah, which was established in 1941 in Crown Heights, where the new Chabad headquarters had relocated from Otwock, Poland.

In 1949, he was recruited by Rabbi Menachem Mendel Schneerson-—then the director of the Kehot Publication Society-—to assist him in his work at the Chabad publishing house. Rabbi Groner, a young scholar at the time, would footnote, index and compile many of the published works. He served in that role for many years.

When the Rebbe assumed leadership of Chabad-Lubavitch in 1951, Rabbi Groner began a life in the service of the Rebbe. After Rabbi Groner’s marriage in 1954, to Yehudis Gurevitz, he was formally asked to join the Lubavitcher Rebbe’s secretariat.

Rabbi Groner was one of the secretaries who conveyed the Rebbe’s responses to countless people who had written to the Rebbe seeking his advice. He also acted as a gatekeeper to the Rebbe, managing numerous appointments that often ran well past midnight. Rabbi Groner thus saw tens of thousands of individuals come for private meetings with the Rebbe. He often asked them to share with him some of the impressions they formed during their meetings with the Rebbe. From this, he once said, he learned that the Rebbe was a leader not only of the Jewish people, but also of countless non-Jews who sought his counsel. He later recorded many of the anecdotes visitors shared with him in a private diary, parts of which were published in recent decades.

Since the Rebbe’s passing in 1994, Rabbi Groner traveled widely visiting Chabad communities where he spoke about his experiences with the Rebbe, and shared insights from the Rebbe’s teachings.

Many of his grandchildren serve as Chabad representatives across the globe.

Related Articles
View All
Reflections
Reflections On Leadership
How would the Rebbe bring healing to survivors nursing shame and insecurity, wanting to hide their identity, to forget, to be left alone in their…
Reflections
Come And Hear: A Dad Defends Shabbat At Chabad
"Dad, isn’t it true that I can’t read from the Torah there?”
Reflections
The TSA Speaks: An Elul Encounter
The Jewish month of Elul is the time when God is most accessible. It is the season when “the King is in the field”—meaning God’s…
Reflections
Sentimental About Plastic Bins
These bins are indestructible, I think — and so are the connections.
Get Inspiration to your inbox!
Newsletter
Join our weekly newsletter for inspiration and updates
Donate
Find Your Local Chabad Center
Subscribe
|
Log In
Chabad
About Chabad-Lubavitch
About Chabad Lubavitch
The Rebbe
Headquarters
Magazine
Magazine
News
News & Updates
In The Media
Impact
Social and Humanitarian
Social and Humanitarian
Education
Education
Community
Community