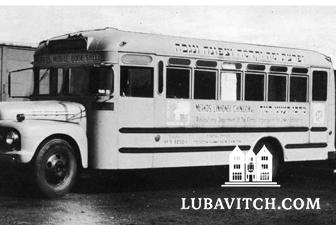 There's much that American Jews today take for granted, making the Jewish experience a comfortable and familiar one. It wasn't always this way.

In this feature, Lubavitch.com brings readers a look at some of the early press releases issued by Lubavitch News Service on behalf of the Lubavitcher Rebbe. Many of the press releases announce the launching of a new educational initiative or a mitzvah campaign that offer a glimpse into a different milieu, and help us appreciate just how far the Jewish American experience has progressed.

NEW YORK (LNS) – The Merkos L’Inyonei Chinuch, the educational arm of the Lubavitcher movement, announced that its publications department has inaugurated the use of a Jewish Bookmobile, another first in the pioneering educational projects of the Merkos.

The Merkos publications department, which publishes Jewish educational literature in twelve languages, is the largest Jewish organizational publishing house in the world. Its bookmobile will carry a complete library of Merkos publications and other books of Jewish interest, along with various Jewish religious articles.

The vehicle was converted from a large bus into a mobile library, bookshop and reading room, with bookstacks, chairs and tables. It will also serve as a rather unique Jewish information center and synagogue. A tefillin booth has been specially partitioned for use in instructing anyone requesting instruction on the use of tefillin (phylacteries).

The mobile unit will visit Hebrew schools, day schools, Jewish educational institutions and various neighborhoods so that as many people as possible will be able to avail them­selves of its facilities. It will also visit outlying Jewish communities, where Jewish bookstores are often sparse.

Visitors will be able to browse the bookshelves while listening to stimulating Lubavitch melodies of the Chabad-Lubavitch recordings.

The University Campus Educational Programs sponsored by the Lubavitch Youth Organization, will also benefit from this new project. The youth organization is sponsoring a series of lectures on Chabad-Lubavitch philosophy in various universities, and the bookmobile which will be able to drive up on the college campus and will bring most of the available Chassidic literature to the students doorstep.