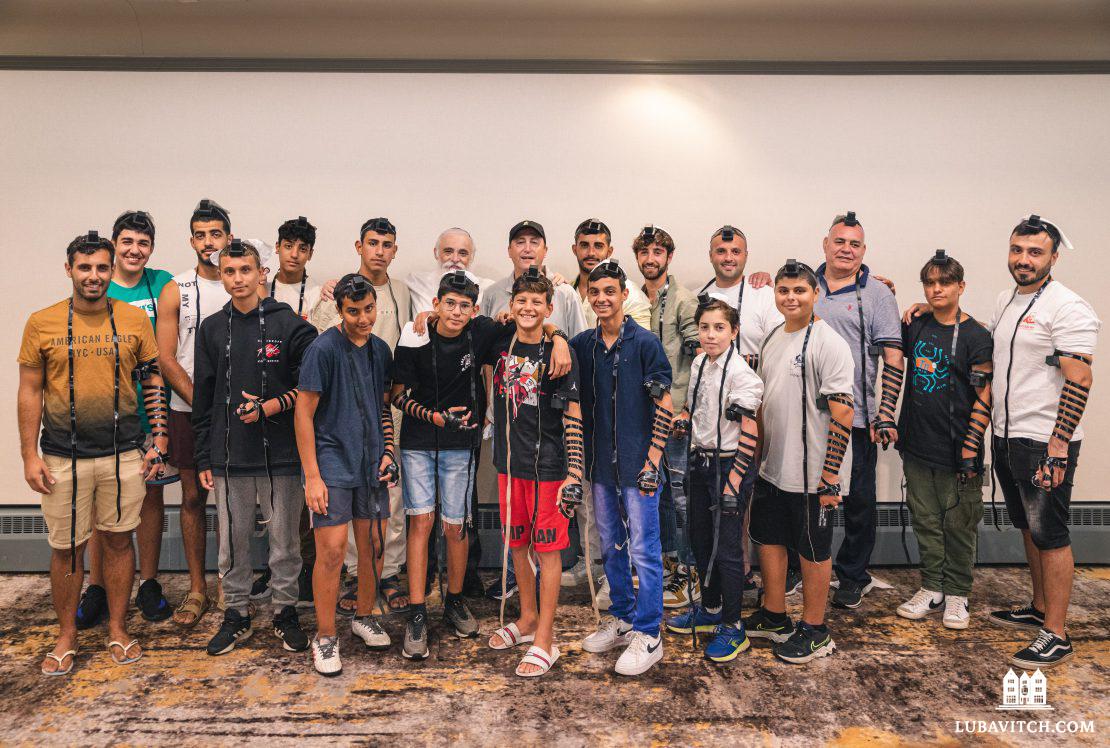 A Montreal community member surprised a group of teenage terror victims from Israel on Shabbat, August 20, by offering to donate a pair of tefillin or Shabbat candlesticks for every youngster.

The teens came to Canada to participate in IVOW, Israeli Victims of War, a unique trip that brings Israeli teens—either wounded in a terror attack or closely related to someone who has been—to Montreal for a month each summer. “The teens represent a real cross-section of Israel,” says Richard Dermer, who directs the thirty-year-old program. “Some are religious; some are not, some are Ashkenazi, some are Sephardi—terror doesn’t discriminate.”

After participating in local Jewish camps for three weeks, the teens spent a week together touring Canada. On their last Shabbat before flying back to Israel, the IVOW teens visited the Montreal Torah Center, where several of the organization’s unpaid volunteer staff are members, for Shabbat services and a unique program honoring Israeli victims of terror.

After the Torah reading, Abie Moses shared his story. In 1987 his pregnant wife Ofra and five-year-old son Tal were murdered by a Palestinian terrorist. Today, Moses is the national chairman of the Organization for Victims of Terrorism in Israel.

Also on hand to share his story was Obie Ben-Chaim, a former Israeli soldier severely wounded in the head while serving in the first Lebanon War. In solidarity with the teens and the sorrow they’ve experienced, the Israeli Consul General in Montreal, Paul Hirschson, also spoke with the group. “Their remarks gave the community a strong sense for who these kids are and the grief they and their families have been through,” Dermer says.

But after the speeches, the program went off script. Community member Jeremy Levy quietly told a rabbi he and his wife wanted to donate a pair of tefillin for every boy on the trip, and Shabbat candlesticks for every girl, provided they commit to using them regularly. When the rabbi relayed his offer to the teens, the vast majority raised their hands— fifty-five girls and twenty boys.

But getting the promised tefillin and candlesticks to the teens before their return flight to Israel on Wednesday morning would prove no easy feat. To complicate matters, the teens were leaving for Toronto immediately after Shabbat for their trip’s finale.

Rabbi New and his staff shifted into high gear. They tracked down the appropriate number of tefillin in Crown Heights, Brooklyn, and FedEx expedited the package to Toronto. But the box ran into trouble at customs. By the time Rabbi New landed in Toronto on Tuesday afternoon to deliver them, he had to hail a taxi and track down the package at a massive FedEx warehouse outside Toronto. With the teens leaving in hours, he rushed to their hotel, tefillin in hand.

Fresh off a long day of roller-coasters at Canada’s Wonderland amusement park, the group of nearly one hundred Israeli teens arrived at the conference room of their Toronto hotel, where Rabbi Moishe New waited with their new sets of tefillin and Shabbat candlesticks. “We had just a forty-five-minute window,” Rabbi New says.

Rabbi New helped teen after teen wrap their new tefillin. “It was an incredibly emotional moment,” he says. Witnessing the scene, Obie Ben-Chaim remarked he regretted not asking for a pair of tefillin. “It turned out we had an extra pair for him!” Rabbi New says.

“Our generation thirsts for real Jewish connection; we just have to respond,” Rabbi New reflected. “The teens were ready to take on another mitzvah. All anyone had to do was respond to them.”

Related Articles
View All
Judaism
Tisha B’Av: Remembering for a Better Future
This evening, Jews around the world will remove their shoes, begin a 25-hour fast, and sit low on the floor in the manner of mourners.
Judaism
Kids Roll Up Their Sleeves and Learn Judaism at New JCrafts Center
In southern Maryland, Jewish kids are having a blast and learning Judaism at Rabbi Levi Raskin’s immersive educational center
Judaism
Unknown Jewish Man Receives Full Jewish Burial
When an unknown Jew passed away without any family, Chabad gave him a full Jewish burial.
Judaism
‘Disturbed’ Lead Vocalist Meets Chabad at the Kotel
Camera crews jostled with security personnel, reporters, and fans as heavy metal star David Draiman made his way across the plaza towards the Kotel (Western…
Get Inspiration to your inbox!
Newsletter
Join our weekly newsletter for inspiration and updates
Donate
Find Your Local Chabad Center
Subscribe
|
Log In
Chabad
About Chabad-Lubavitch
About Chabad Lubavitch
The Rebbe
Headquarters
Magazine
Magazine
News
News & Updates
In The Media
Impact
Social and Humanitarian
Social and Humanitarian
Education
Education
Community
Community