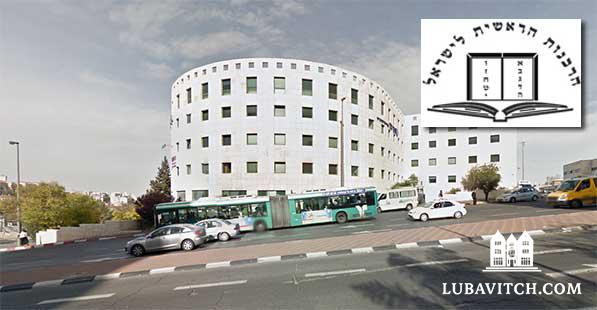 The current location of the offices of the chief rabbinate and the new logo (inset).

Israel’s chief rabbinate updated the design of its official logo in which the Ten Commandments will now be depicted in a square rather than the familiar rounded shape. The change comes in time for Shavuot, the holiday that celebrates the revelation at Sinai with the Ten Commandments and the Torah. This year, Shavuot falls on Sunday and Monday (May 24th 25th).

To many Israelis, it is merely a curious change of design. For others, it is a return to authentic Jewish tradition. The two tablets, or luchot, as recorded in the Talmud (tractate Baba Batra 14a), formed a square. But it is the cylindrical design that has become familiar to most.

Historians point out that the familiar rounded top of the tablets was introduced by the Roman Order, derived from their architectural style prevalent at the time of the destruction of Jerusalem and the Holy Temple in the year 70 CE. “The Roman desire to eradicate everything Jewish, included even the shapes of our most holy symbols,” wrote the late Michel Schwartz, a famed artist of Judaica works.

Schwartz recalled that when he first began drawing Jewish art for the Chabad educational arm in the early 1940’s Rabbi Menachem Mendel Schneerson, who was yet to become Rebbe, headed the educational arm and instructed him to draw the tablets as two rectangles that together, form a square.

To the Rebbe, a Jewish symbol should be drawn according to Jewish sources. The Rebbe explained that specifically in the case of the tablets, when the intention of the Romans was to depict it contrary to Jewish tradition, one should refrain from drawing the tablets that way. In the 1980’s the Rebbe spoke publicly on this issue.

Rabbi Dovid Lau, the chief rabbi of Israel, said that when the Jewish sources and the Rebbe’s words were recently brought to his attention, he arranged for a new logo. Next month the new logo will be affixed on the chief rabbinate’s new offices.

“This is the true way it should be according to the Torah,” Lau said this week. “This was not only incumbent upon me in my position; it is a merit for me to be the one to make this change.”

With reporting from Binyomin Lipkin of the Kfar Chabad Magazine.