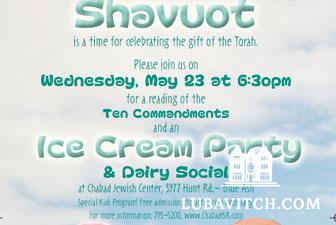 It's one of the three major festivals on the Jewish calendar, and yet it goes largely unnoticed. But around the world, Chabad-Lubavitch is devising ways to put this holiday back on the calendar.

What if the Torah threw a party and nobody came?

Shavuot, the holiday that celebrates G-d’s gift of the Torah to the Jewish people at Sinai, should be a pivotal, standing-room-only holiday. Yet when the two-day holiday begins this Tuesday at sundown, only a smattering of Jews will take part in the festivities.

Not content to let the opportunity to connect with the Divine slip away, Chabad centers everywhere, including places like Bozeman, MT, and Warsaw, Poland, are innovating, educating and taking some surprising steps to spread the word about the Jewish people’s Torah anniversary.

The neglect of Shavuot is not only apparent to Chabad-Lubavitch Shluchim. The plight of this ignored holiday has been widely noted by observers of the Jewish scene across the spectrum.

Some blame timing – Shavuot falls out just seven weeks after the Passover blowout and in midst of graduation, prom and wedding season. In the northern hemisphere, Shavuot is in the ring against the sirens’ song of summer vacations. Guess who wins.

“Shavuot doesn’t have a secular equivalent to push up its popularity,” speculated Rabbi Avrohom Brashevitzsky of Chabad of Doral, FL. Chanukah, Passover, even Purim, provide Jewish people with their own celebrations at a time when non-Jewish celebrations dominate. Not Shavuot.

More likely, though, is that Shavuot is the only holiday that does not have ay particular ritual or symbol attached to it.

Anticipating the apathy, the Lubavitcher Rebbe, Rabbi Menachem M. Schneerson, of blessed memory, instituted worldwide Shavuot campaigns that challenged rabbis to put the customs unique to the holiday to raise awareness of Shavuot and make sure that men, women and children come to the synagogue to hear the reading of the Ten Commandments on Shavuot.

Kids are the magnets for programming planned at Chabad Jewish Center of Cincinnati, OH.  Program directors Rabbi Berel and Zipora Cohen are merging the ritual of hearing the Ten Commandments with the custom to eat dairy foods. With Ziploc baggies, rock salt, milk, sugar and vanilla, the kids will make their own ice cream. Meanwhile teens will rehearse scenes from the Book of Ruth, which is read on Shavuot, and adults will socialize over cheesecake.

Traditionally,  the custom is to pull an all-nighter Torah study session on the first night of Shavuot. It’s a tough sell when the holiday falls out right in the middle of the week, but mixing food with food-for-thought helps. In North Hollywood, CA, Chabad mines local talent to spice up the learning sessions. A doctor will be discussing Jewish medical ethics, and a lawyer from the community will be dissecting important cases in light of Jewish teachings. Program director Rabbi Nachman Abend fuels the discussions with a selection of coffees.

On the east coast, Chabad of the Shoreline in Branford, CT, Rabbi Yossi and Rochel Baila Yaffe plan to keep learning sessions lively by sandwiching study sessions between courses of their holiday meal.

“When everyone else in town is sleeping and you are among a group that is reaching for a higher purpose and deeper meaning, it forms a real bond, said Rabbi Shalom Lubin.

The Lubavitch children's organization, Tzivos Hashem, of the CIS brought the art of writing Torah scrolls to 600 Or Avner day school students in 5 cities. Children growing up in the Esther and William Benenson Children’s Homes, raised to appreciate of the holiday’s import, have chosen topics and learning partners to last the entire Shavuot night.

Because the timing of the Ten Commandments’ recitation is not engraved in stone Chabad-Lubavitch of Montana in Bozeman has chosen to start the reading at 5:30 p.m. Notified of the convenient hours, Jewish families from Flathead Valley and Missoula have booked spaces at Rabbi Chaim Shaul and Chavie Bruk’s Shavuot feast. Word spread across the web, and several Jewish vacationers are taking a break from roughing it in Yellowstone National Park and booking a hotel room in Bozeman so they can spend Shavuot with Chabad.

Little by little, with cheesecake and ice cream, Torah calligraphy and coffee bars, Shavuot’s image is being dusted off and revived. Many Chabad leaders expressed the hope that Shavuot would see a renaissance similar to Purim, now viewed as a family friendly fun festival.

Then again, there are times that Shavuot’s low profile works in its favor.  Rabbi Yossi Kaplan of Chabad of Chester County, PA, recalled when the dusk-to-dawn learning schedule drew in a perfect stranger. “He only came to the door because he didn’t believe a rabbi would be up so late.” From this chance encounter, a bond formed and appreciation of Torah – and Shavuot – grew.