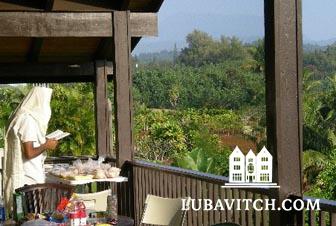 (Lubavitch.com) By the looks of the enthusiastic crowd that turned out to hear the Ten Commandments read at Chabad Kauai, it seems that everything is falling into place for the opening of its permanent center next year.

Because to the dateline that slices today into yesterday falls right near Kauai, the rainforest covered Hawaiian island is just about the very last place anything happens on the planet. During this week’s holiday Shavuot, Chabad drew a group of thirty to a private vacation home in the south shore city of Poipu.

“It was wonderful. People came over from all walks of life. There was plenty of food, plenty of good cheer, plenty of everything. When people came, they did not want to go home so fast,” said Mike Cofsky. He and his wife Daisy hosted the holiday event.

Most who attended were year-round Kauai dwellers. For some it was their first encounter with a real Torah scroll. As night fell, the women rose to light the holiday candles, repeating the blessing after Daisy Cofsky. “The passion the Jewish community has for finding answers, for wanting to be involved, is amazing,” said Rabbi Aycee Abrahams, 24, who took leave of his job in New York to read the Torah in Kauai.

Chabad has brought about a change in the island’s Jewish community, which is estimated to be 1,000 strong, according to Dr. Francine Snyder, a psychotherapist. “There is an excitement as we look forward to the holidays, so we can come together, learn, pray and have sense of community.”

It took a world-spanning effort, and a lot of Skype calls between Hawaii, the Philippines, Germany and New York, to bring about Chabad Kauai’s celebration of Shavuot.

When Chabad Kauai representative Rabbi Michoel Goldman discovered he would not be able to fly to Hawaii from his home in New York for the holiday, he searched for a replacement. Someone who knew Kauai’s Jewish community.

He reached Rabbi Dovid Drizin, a real estate manager and developer, who was in Germany at the time coordinating a family tour of Jewish historical sites. Rabbi Drizin had been bitten by the Kauai bug over Passover when he helped host the Chabad seder.

“All different kinds of people are here, but everyone is searching, looking to be healed or to heal. It’s like an American-style India. It’s such a special place with a special community. If they didn’t hear the Ten Commandments on Shavuot, I’d be upset with myself.”

Chabad of Hawaii, in Honolulu, offered to loan the community a Torah. “Rabbi Itchel and Pearl Krasnjansky have been a source of continuous support since Chabad Kauai’s activities began three years ago,” said Rabbi Goldman. Rabbi Drizin and his co-leader Rabbi Abrahams flew the Torah, wrapped in a prayer shawl, over from Honolulu.

What they stashed in the airplane’s baggage compartment drew even more stares. They packed ten authentic New York cheesecakes, frozen solid, because it’s a favorite dessert on this holiday when it’s traditional to serve dairy foods.

Still more food arrived on the eve of the holiday from Honolulu’s only kosher restaurant, Yudi’s Deli. Yaron Shlomo, the deli owner’s brother-in-law, hopped aboard an inter-island flight carrying the fresh food.

They brought the food to the Cofskys’ home. The couple had been in the Philippines when Rabbi Goldman asked them to host the services. They agreed to have their home turned into a synagogue, on a holiday that involves all-night Torah study.

Rabbi Goldman worked the wonders of worldwide technology to bring word of the Shavuot celebration to the greatest number of Kauaians. As his car inched along in a bumper-to-bumper jam on New York City’s Belt Parkway, Rabbi Goldman passed the time listening to an MP3 recording of a 1979 talk given by the Lubavitcher Rebbe, Rabbi Menachem M. Schneerson, of righteous memory. In the recording, he heard the chastising his Chassidim for not widely publicizing the importance of hearing the reading of the Ten Commandments.

“I realized I had not done enough to get the word out in Kauai. Yes, I emailed my ‘list,’ called several people, but this was not enough.”

He phoned Kauai’s community radio station, KONG, just in time to give a “shout out.” Other callers were blast advertising the availability of rental homes, used appliances. “They put me on the air…and I did a live advertisement for Shavuot on Kauai, while sitting in traffic on the Belt Parkway in NYC!”

Zapping across boundaries of space and time to bring a Shavuot experience to Kauai is “miraculous,” said board member Hillel Lofaso, MBA. “I find it incredibly inspirational that Chabad is able to reach all corners of the globe and brig people closer to Yiddishkeit. To be able to plan something in New York and have it realized on the other side of the globe astonishes me.”